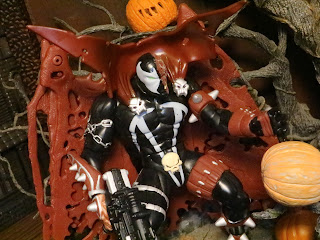 Spawn II (Spawn version 2) was released in the third series of classic Spawn figures back in 1995 and, rather than sporting a variant costume like Commando Spawn or Ninja Spawn, was instead a second version of the standard Spawn figure. This version of Spawn looks a little bulkier and more muscular than the original release, perhaps inspired by the rivalry of McFarlane, Kenner and Toy Biz that caused a trend of bigger figures with more pre-posed and dynamic bodies. I picked up Spawn II this summer at Retro Toys and Collectibles in Cherryville, NC and while I was really excited to add this one to the collection, in hand there are definitely a few things that leave me a bit cold. He's a really cool looking figure with lots of skulls and spikes, though, so he's still perfect for the Halloween season. Let's take a look at Spawn II after the break... 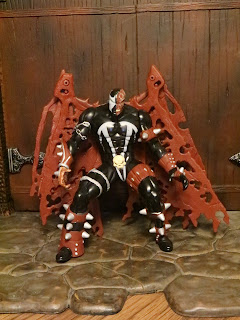 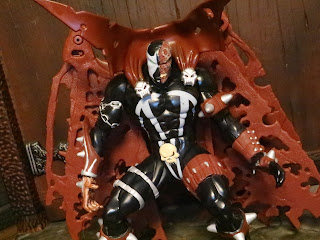 * Spawn's sporting his classic costume overall, though he does have a very different cape that's tattered and worn. The paintwork looks neat and clean and there are lots of painted details on the figure such as the various bands, gauntlets, and chains Al Simmons is sporting. He's definitely bulkier than the first Spawn figure. Not to a crazy level or anything but he definitely seems inspired by things like Kenner's Legends of Batman line. 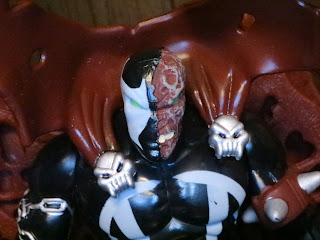 * The headsculpt is really cool and shows off a face that's split in half: Half Spawn's standard masked face and half Al Simmons' exposed, burned flesh. It's a cool look that helps the figure to stand out, though wouldn't swappable heads have been cool? 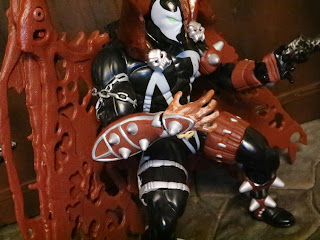 * Spawn has some nifty fine gauntlets and bracers covered with spikes. You don't look a backhand from this guy! Even without his massively oversized gun, Spawn still looks ready to deal some damage. 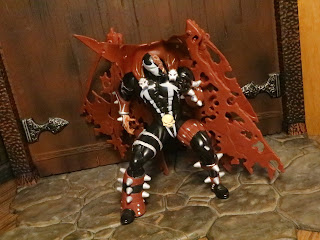 * So.. let's talk about the articulation. Spawn II has pretty standard articulation for the time, plus a few little extras like hinged elbows and swivel wrists. Yeah, those are everywhere now but back in 1995 they were still fairly uncommon on a figure this size. He feels quite durable, far more durable than the first series figures, and he stands well despite having a massive cape. 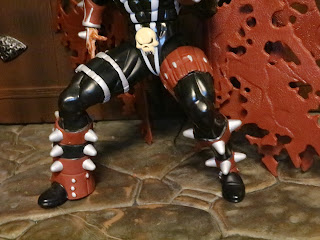 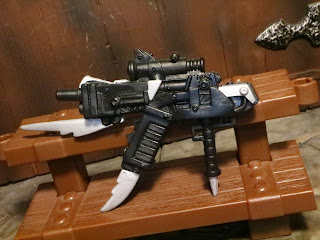 * Spawn also comes with a massive gun and, holy cow, this thing is crazy. It looks like a larger submachine gun with a huge magazine, a scope, a bayonet under the barrel, and bayonets on the magazine and on the handle. Yeah, that's crazy. How many bayonets does Spawn need? This is like some sort of weird close quarters weapon that also just happens to be a gun. I love the wildly impractical and over the top gun designs on so many of the Spawn toys, though. 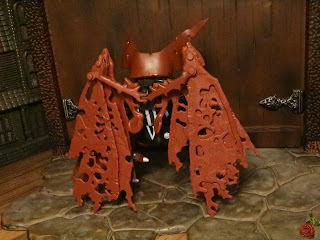 * Spawn II's major selling feature is that he has a massive cape that's kind of wing-like. The cape is tattered and torn and the idea is that when you squeeze the tabs on the back together the six panels of the cape (there's three on each side, so six panels total) extend out dynamically. 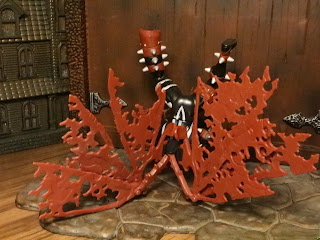 
* The cape looks cool but it just doesn't function all that well. The wings can't stay out, so displaying it with the cape open just doesn't really work. There's also something weird in the design that keeps the left side from extending out all the way. It's a cool concept that's just not executed as well as it could have been. 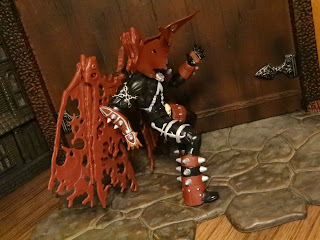 * I like most of the articulation on this version of Spawn but it's so weird that McFarlane Toys didn't just go ahead and give him hinged knees. Why knot? He stands so much shorter than most of the other figures and it dooms him to always standing in a weird crouched position. 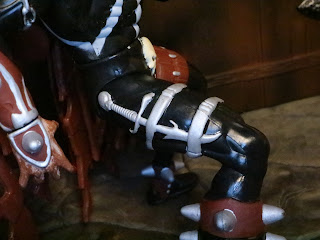 * That dagger on his thigh is pretty neat. Too bad it's just a sculpted on piece rather than a removable accessory. So many other figures have functioning sheathes in Spawn series 2 and 3 so why not this one? 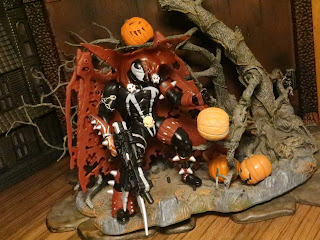 Spawn II seems like he should shine but ultimately he's kind of average. I mean, he looks really and he has a great headsculpt, a cool weapon, and lots of paint deco, but the weird cape feature that doesn't really work and his perma-crouch make him less fun than he should be. With a few tweaks he would have been an amazing action figure but, alas, it wasn't meant to be. He gets a Good, which is a fairly average rating. Did you own this guy? What was your favorite Spawn figure from the 1990s? Let me know in the comments below. I'm genuinely curious to hear!