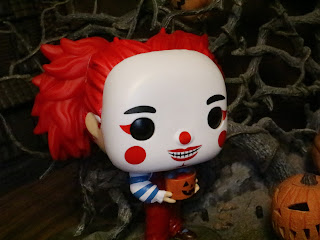 Over the past few years Spirit stores have hosted many exclusive Funko POP! vinyls and this year they have a rather interesting one: Chuckles, one of the unfortunate victims of the Halloween School Bus Massacre in the film Trick 'r Treat. Trick 'r Treat has really gone from being a bit of a cult film to a full blown Halloween classic. While obviously the film is absolutely fantastic and worthy of watching every year, the very cool character of Sam seems to be popular even to folks who aren't familiar with the film. There has been lots of Sam merchandise released over the years but now we're starting to see some of the other characters in the film, which brings is to Chuckles. Who is Chuckles? As mentioned above, Chuckles is one of the victims of the Halloween School Bus Massacre, an insidious plot by the parents of a group of children with disabilities to have their children killed by the school bus driver. In Trick 'r Treat it's told as an old urban legend but, later in the film, we learn there's some truth to the story. The film never calls the character Chuckles (the actress, Karen Worrod, is even uncredited), as are most of the other children, so this seems to be a newer name used for the character. In 2020 Spirit stores also released masks of some of the Halloween School Bus Massacre victims, including Chuckles, but it was simply called "Clown Mask." I'm quite shocked we got Chuckles before Rhonda, Laurie, Maria, Charlie, Mr. Wilkinson, Mr. Kreeg, or pretty much any other character in the film, but I won't turn such an obscure reference for my horror shelf. Plus, there's a great spookiness to the fact that Chuckles is just an old fashioned trick 'r treater. Let's take a look at Chuckles after the break... 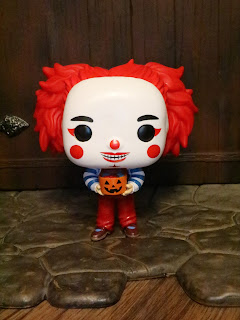 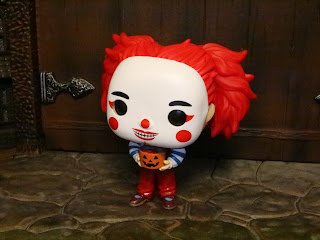 * Chuckles is a pretty standard POP! vinyl, so she has a swivel head and stands just fine on her own. She's in a simple pose, holding out her pumpkin pail to ask for some candy. 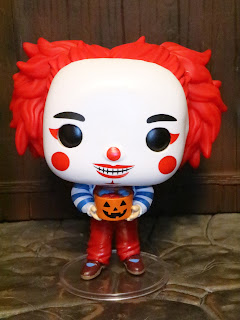 * The costume is definitely very "normal" but it seems to match the movie well, being a costume from a child in the late 1970s. The outfit looks right and it suitable simple: Red overalls, a blue and white striped shirt, and some casual shoes. It's definitely a tribute to the old style "thrown together" costumes and creepy vintage Halloween photos of yesteryear. The arms are really weird and bulked up in the movie and I think I can see a little ore puffiness in the sleeves here, too. 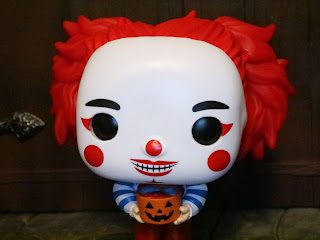 * The clown mask on Chuckles is simple but creepy and effective. It's a white mask with black and red paint for the details. The grin is really unsettling, too. Here's a shot of the plastic mask sold at Spirit for comparison. 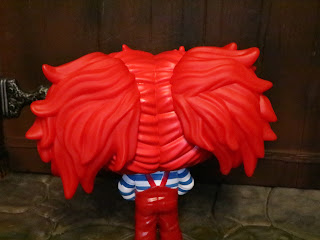 * The hair is really funny and quite large with a lot of detail. I'm pretty sure it's supposed to be a wig that the girl is wearing, so it's definitely a very cartoonish red like your typical clown. 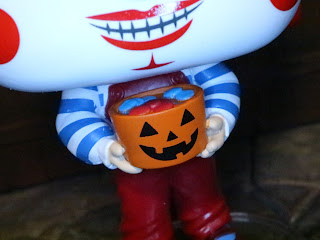 * Chuckles is carrying a pumpkin Halloween pail filled with candy. It's definitely not one of the McDonald's pails, as those didn't come out until 1986 and the Halloween School Bus Massacre occurred in the late 1970s. I love the look of the pail, though. It's just so generic and classic. 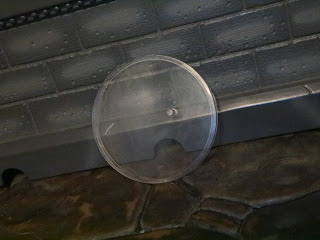 * While it's not an absolute requirement, I am always pleased when Funko includes a stand with a POP! vinyl. It's a simple, transparent disc stand but it does keep the figure upright and standing tall as part of your Halloween display. 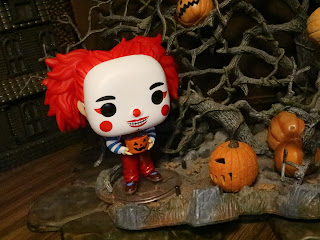 Looking for a really obscure horror POP! vinyl? This is definitely it. Yeah, Trick 'r Treat isn't that obscure, but Chuckles? A background clown trick or treater? Only diehard fans will recognize this one. While I'm surprised that Funko went with this rather than the zombie version of the character, this is still a unique and interesting little collectible. When I first saw her I assumed that other stores might have the rest of the crew, or at least a few of the other Halloween School Bus Massacre kids, as exclusives, but it seems like this is the only kid out there. Unusual but spooky and another Great POP! vinyl.

This is the first figure of Chuckles I've reviewed. For more POP! Movies figures check out the following:
Danny Torrance #458 from The Shining
Dr. Ian Malcom #552 from Jurassic Park
Gage & Church #729 from Pet Sematary
Harold #846 from Scary Stories to Tell in the Dark
Jack Torrance #456 from The Shining
Leprechaun #1245 from Leprechaun
Michael Myers #03 from Halloween
Norman Bates #466 from Psycho
Pennywise #55 from It
Pennywise (with Beaver Hat) #779 from It: Chapter Two
Sam #57 from Trick 'r Treat
Sam with Pumpkin & Sack #1002 from Trick 'r Treat
Ski Harry Dunne #1044 from Dumb and Dumber
Posted by Barbecue17 at 10/21/2022