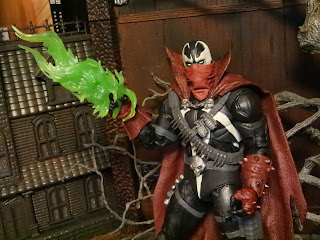 Once again Spawn makes an appearance in this year's 31 Days of Toy Terror X. At one point in the early summer I almost considered doing a Spawn themed 31 Days of Toy Terror called Spawntober, but I ended up deciding not to. There sure are quite a few Spawn figures covered this year, however, and I believe Commando Spawn is the newest release of all of them. Released just a month or two ago, Commando Spawn is actually part of McFarlane Toys' Mortal Kombat 11 line. Inspired by the original 1995 figure from the vintage Spawn toyline and based on one of Spawn's alternate outfits in Mortal Kombat 11, Commando Spawn is a rather popular Spawn variant that I'm sure many fans have been waiting for since the Spawn figures were relaunched. One of the only downers about this guy, though, is that due to Warner Bros.' ban on guns coming with merchandise as accessories, Commando Spawn doesn't come with any weapons. He's a great figure to pair with the Munitions Pack McFarlane Toys released earlier this year. Funny how that worked out, right? Let's take a look at the ever vengeful Commando Spawn after the break... 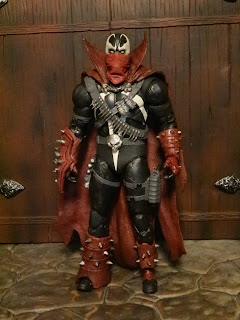 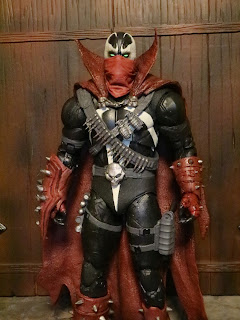 * I love when Al Simmons falls back on his military background and training in the comics, gearing himself up with lots of heavy artillery, and this figure makes a nice base for those who appreciate that take on Spawn. While this versions of Spawn does share a few parts with the previous Mortal Kombat 11 Spawn variants (the cape, right boot piece, and right wrist gauntlet) everything else is new. Rather than wearing a sleek superhero inspired suit or a more organic looking necroplasm derived outfit, this version of Spawn is garbed in armored tactical hear. He's in his classic colors of black and red but the little details on his armored bodysuit really set him apart from the other Spawn figures in this line. 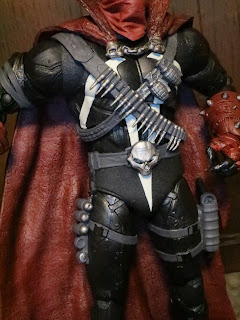 * Spawn is also sporting some extra gear on straps across his chest. He's got a bandolier of ammunition, two hand grenades, some projectile grenades on his right hip, and a holstered pistol strapped to his right. 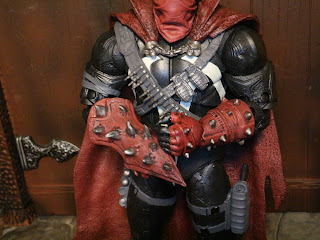 * Like usual, Spawn's gauntlets look really sharp and pointy. They look pretty brutal, right? You definitely want to go hand to hand with Spawn when he's rocking these gauntlets. They are fierce. 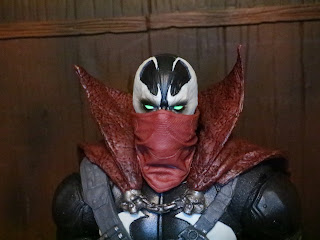 * The headsculpt is really cool here and, because of the red facemask on his lower face, he kind of reminds me of the Shadow. That's a slick look for Spawn that surely must terrify evildoers. The bandanna/ face covering is made from a softer, more pliable plastic, and looks incredible covering most of Spawn's face, only revealing his glowing green eyes. 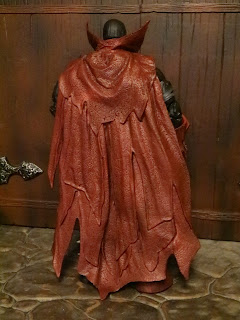 * I believe all of the other MK11 Spawn figures share this same cape. It's not a removable piece but it is fairly pliable and rubbery and looks kind of cool. This version actually has a dark wash on it which really brings out the detail more and shows off the texture of the sculpted material better. 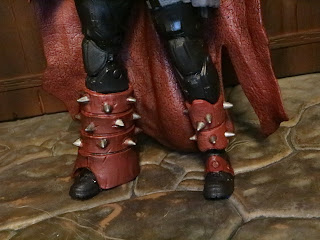 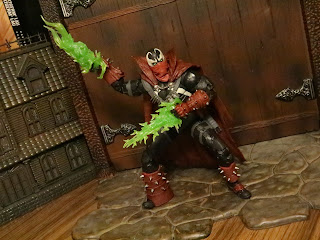 * Commando Spawn uses the same articulation scheme as the other Mortal Kombat 11 Spawn figures which means the articulation is excellent on this figure and the plastic quality is fantastic, too. The modern McFarlane Spawn figures are very sturdy and durable with nothing fragile or brittle. Other than the limitations imposed by the presence of the cape Al has a fantastic range of movement. He's even sporting articulated toes and lateral hinged shoulders (aka butterfly joints). These are really fun figures to mess around with and Commando Spawn might be my favorite of the modern versions of Spawn. 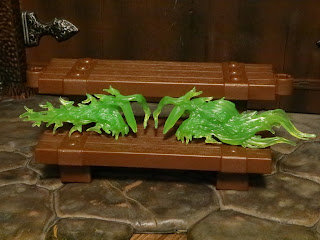 * Like Malefik Spawn, Commando Spawn comes with two necroplasm effects which are designed to fit in his hands. The green, glowing effect of the plastic and the way the tendrils of necroplasm are sculpted differently are quite cool and make for a rather dynamic looking figure. One's a bit more flowy and flame like while the other looks barbed and sharp, almost like lightning. 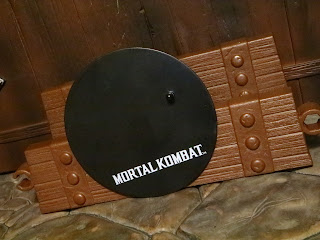 *  McFarlane has been including a simple disc display stand with almost all of their action figure releases for a few years now and I love it. It should seriously be an industry standard practice at this point. It's black and basic with just the Mortal Kombat logo printed on it but it gets the job done. 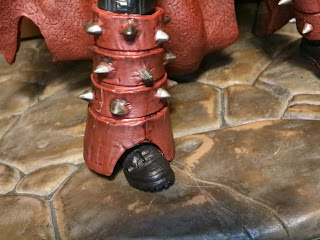 * If you look closely you can see there's a defect on the toe-hinge on the right foot of Commando Spawn that sometimes causes it to separate. It's almost like the pin holding the toe joint in place wasn't fully formed. 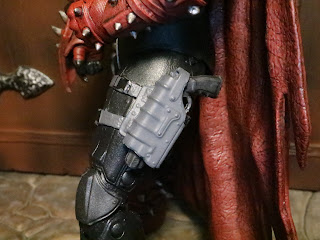 * Hey! Commando Spawn has a holster! And there's a pistol in it. But it's not removable. Not. Removable. I know this isn't McFarlane Toys' fault but part of Warner Bros.' directive, but this still really irks me. I almost would have rather that Commando Spawn came with an empty holster so the Munitions Pack accessories could be used here. 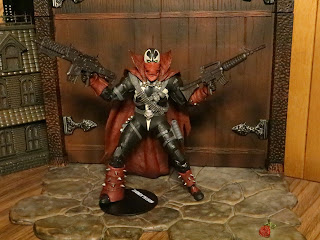 Just for Fun:
* The Munitions Pack weapons work excellent with Commando Spawn. Give him some of these and he's ready to rock and roll. 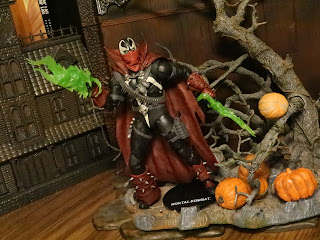 Commando Spawn might be my favorite version of Spawn in the modern McFarlane Toys line (both the self-titled Spawn series and the Mortal Kombat 11 releases) but since mine does have a small QC error, I'm having to bring him down to a Great and a 1/2 instead of full marks. Still, for the price (and especially if yours is normal), this is an incredible figure. Considering that McFarlane just put the Munitions Pack out (with another on the way), I don't find the lack of weapons as big of a problem, though I do wish the pistol had been missing from the holster so I could have used one I already had.