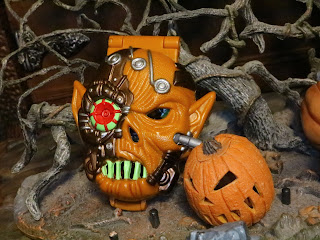 It's been a couple years since I last reviewed a Mighty Max playset so here's another original set from my original childhood collection: Mighty Max Battles Skull Warrior! This is one of the smaller sets (called Horror Heads) and they were some of the first sets I remember finding as a kid. If I recall correctly these came out first, followed by the Doom Zones and then Skull Mountain. I remember getting this for Christmas the year it came out with a few other Horror Heads and Skull Mountain. While the Doom Zones and larger playsets were the best in the series, the smaller sets, like the Horror Heads, were more memorable because of the memorable character depicted when the playset is closed and the micro villains included. Skull Warrior is my second favorite of the series 1 Horror Heads and has a fantastic villain and a neat vehicle, the Space Surfer, which both the villain and Max can ride. Let's flip our caps and check out this spooky set for today's installment of 31 Days of Toy Terror X after the break... 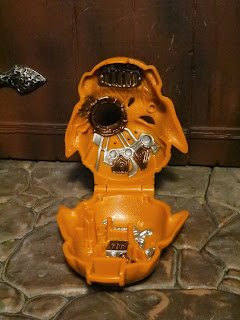 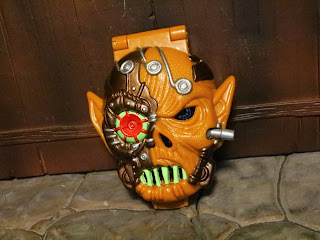 * Most of the sets in the line look some villainous creature when they're folded up and Skull Warrior is one of the coolest series 1 Horror Heads to look at. Green teeth, a half cyborg face, pointy ears, and lots of little electrodes connected to his skull make for something that looks like it should be on the cover of a heavy metal album. It doesn't quite look like the Skull Warrior figure, so I guess this is a different take on the guy. 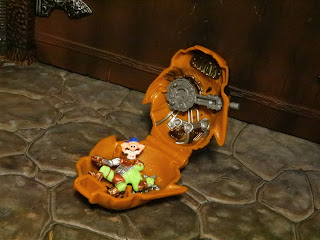 * Open the set up and you'll find two microfigures, Mighty Max and Skull Warrior, along with the Space Surfer. The playsets for most of the Horror Heads are kind of underwhelming but this set does have a place to store everything. There are also quite a few paint applications inside to show off the wires and machinery inside of Skull Territory. 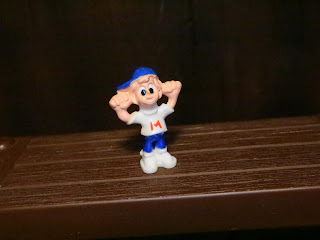 * Here's Mighty Max. While some of the later sets had unique Max figures, I believe the earlier sets came with a randomly inserted Max from a few different poses and with differently colored hats. My Max here has a blue hat and looks like he's taunting the villain. That's a bold play, Max. 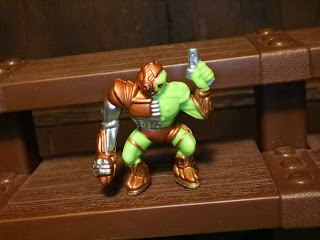 * Skull Warrior is a pretty cool minifigure, though after thinking about it I believe this is actually the one from the Heroes & Villains Collection #1. That Skull Warrior had lighter bronze armor while the one included with this set has more of a brownish- bronze colored armor. Still, robotic cyber skeleton guy, green skin, and a pistol. Pretty cool stuff. He's definitely larger than Max, too. 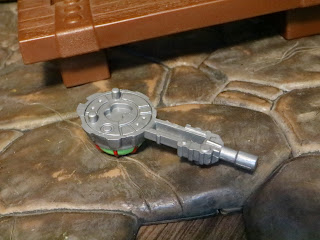 * The Space Surfer sounds like a Marvel or DC Comics character but it's actually a hovering board used by Skull Warrior in chasing down Max. There are two pegs on top of the main platform which can hold Skull Warrior but there's also a footprint to keep Max on there as well. The long front seems like a laser cannon and gives whoever wields the Space Surfer some serious firepower. 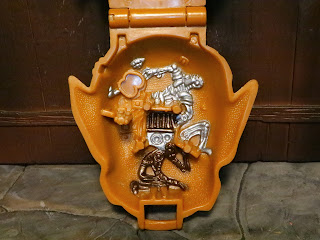 * The coolest part of the inside of the playset are these cyber skeletons inside. They kind of remind me of the T-800's endoskeleton. The brown one is all hunched up but the silver one looks like he's been scattered about. 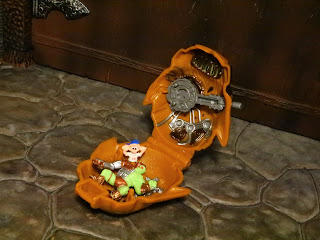 I really miss the prevalence of micro playsets like this that offered up a complete adventure/ play environment in one package. My daughter has a couple of the modern Polly Pocket sets from a few years back and while I always admire how cool they are, she's just not that into them. They always make me want Mighty Max back. Mighty Max Battles Skull Warrior is a Great set and is definitely among the best of the series 1 Horror Heads. The later series sets got even cooler but, sadly, they're incredibly difficult to find and really flipping expensive.
For more Mighty Max reviews check out the following:
Doom Zones
Mighty Max Blows Up Dino Lab
Mighty Max Conquers the Palace of Poison
Mighty Max Escapes from Skull Dungeon
Mighty Max Slays the Doom Dragon
Horror Heads
Mighty Max Challenges Lava Beast
Mighty Max Hammers Ax-Man
Mighty Max Tangles with Lockjaw
Shrunken Heads
Brain Face and Wraptile
Rat Trap and Vampyre
Posted by Barbecue17 at 10/20/2022