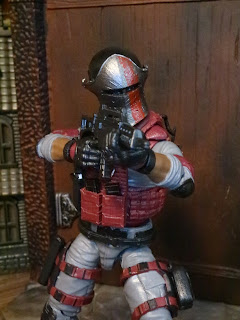 I received four Action Force figures for my birthday last month and the Garrion Cavalry is the third of them. The Garrison Cavalry is a troop builder, one of the troops under Kerak's command. Like Kerak, with his medieval styled helmet, the Garrison Cavalry figure has a medieval styled visor attached to his modern combat helmet. The Action Force line, like so many other modern toylines, definitely takes advantage of the "library of parts" philosophy of action figure design, but the addition of new elements, new color schemes, and new headsculpts still keeps things fresh and exciting. There's just something I love about this figure. I think the fantastic maroon and grey color scheme plays a huge part in it. He just looks so cool! Let's take a look at the Garrison Cavalry trooper after the break... 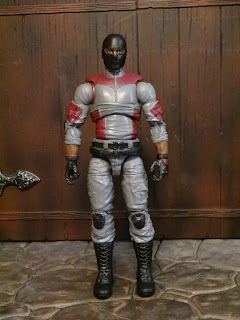 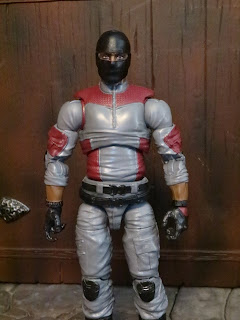 *  The Action Force line does use a library of parts and base bodies, so there is obviously a lot of reuse here. In my mind, though, it fits the more realistic military aesthetic of most of the Action Force line, though it does seem like every new series of figures adds more unique parts to the library. The color scheme is awesome on the Garrison Cavalry and it really sets him apart from the figures we've received in this line so far. The grey with maroon highlights just seems really exciting. The sculpt of the outfit is excellent with plenty of wrinkles, folds, zippers, and seams to show off the detail on the uniform. 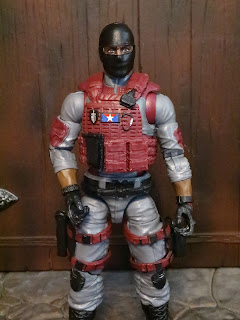 * Many of the series 2 figures comes outfitted in this specific vest, but the Garrison Cavalry trooper's maroon vest looks the best. He's also sporting one of the belts that isn't removable unless you disassemble the figure. The vest is easily removable, though, and is much smoother and easier to put on and take off than the series 1 vests. This guy looks awesome geared up with his vest, holster, and the gear pack on his left hip. 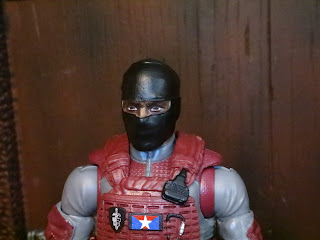 * The headsculpt is pretty basic but works for a troop builder (unless this guy's name is really Garrison Cavalry, which is actually a pretty cool name). He's wearing a simple black balaclava, nothing too fancy. I think this is actually the same headsculpt as the Urban Combat Republic Trooper, and probably some of the other basic troopers I don't own, too. 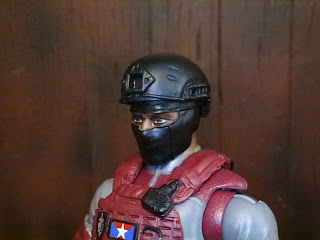 * To help keep him safe in battle, a standard helmet is included. It's a sleek, sporty, modern combat helmet that we've seen with other figures in the line and it fits just fine on this headsculpt. It sits up high, but that actually seems to be the style and design of this particular piece of gear. Of course, just the helmet by itself isn't the way to display this guy. 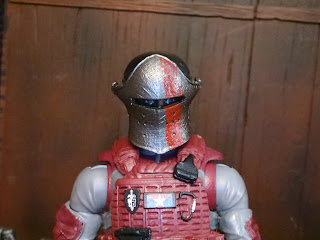 * The armored, medieval styled visor is really cool and fits onto the helmet via two holes in the side. It's really quite menacing and nicely ties these guys in with Kerak. The visor can lift up as well, if you want, but it looks best in the down position. You can even see his eyes through the slit. Pretty incredible, right? 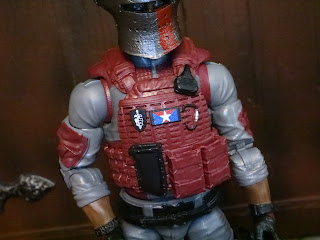 * Here's a close-up of the Garrison Cavalry trooper's vest to show off the patches, pouches for spare magazines, knife sheathe, and radio. The texturing on the vest is fantastic and little details like the carabiner attached to the front really make this an impressive accessory/ outfit piece. 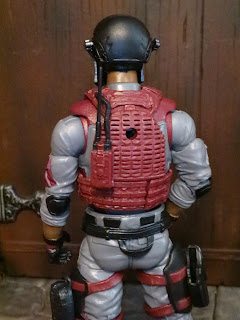 * Here's a shot of the back of the vest to show off the radio attached to it. The radio does have a removable antenna, something I discovered by accident. 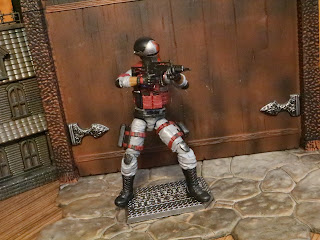 * The articulation is pretty much the same as on most of the other Action Force figures I've picked up so far. The joints and range of motion are excellent and everything with the Garrison Cavalry trooper's articulation worked just fine right out of the package. Unlike the series one figures, there was no need to do anything to loosen up the joints for posing. These are sturdy, well made made action figures that are a lot of fun to pose and mess around with and this guy is one of my favorites for some reason. 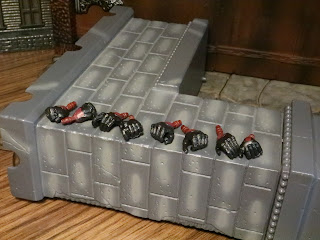 * Included with the Garrison Cavalry trooper are eight gloved hands in the same poses as those included with every other figure. The pegs are really thick and sturdy and swapped in and out very easily. There's a pair of fists, a pair of pistol grips, a pair of standard grips, and a pair of cradling hands for holing rifles. 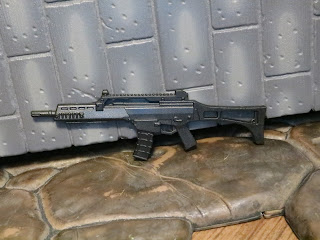 * The Garrison Cavalry comes equipped with an HK G36. It's in all black and it's a sleek looking weapon that fits the design of the figure nicely. The sculpt is excellent with lots of crisp detail. 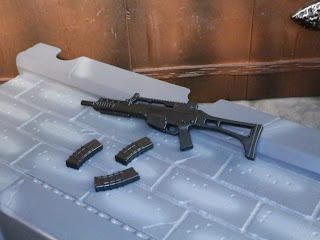 * The magazine from the G36 is removable and two extras (so three total) are included in the set. 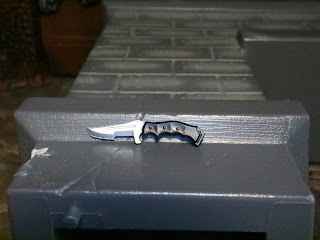 * We've seen this knife before (it came with the Steel Brigade trooper) and it's still a great sculpt with a silver paint application for the blade. It's a wicked little tool. 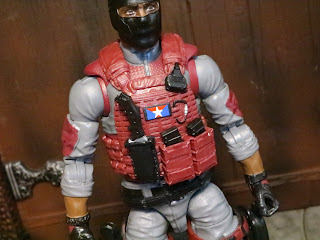 * Like the other series 2 figures sporting this vest, The Garrison Cavalry trooper can store his knife and the two extra magazines away securely. The knife slides safely into the sheathe while the extra magazines fit securely in the two pouches. 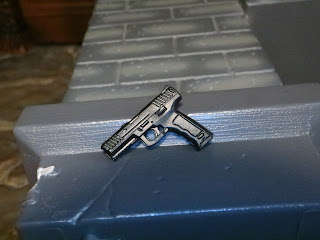 * The Garrison Cavalry sidearm is an H&K USP in all black. It's a great, basic pistol for these guys to use. Someone in the Garrison likes H&K, don't they? 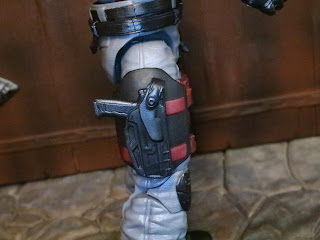 * The USP nestles snugly in the holster that fits over the trooper's right hip. It stays in their perfectly and looks great with those red straps. 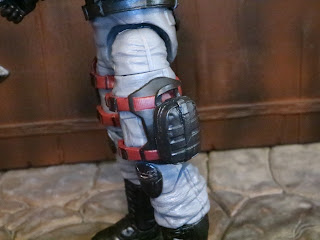 * The Garrison Cavalry also come equipped with the ever popular pouch on the left hip. It's a removable piece and, again, those red straps look fantastic. What's he got in their? Ammo? A first aid kit? Snacks? 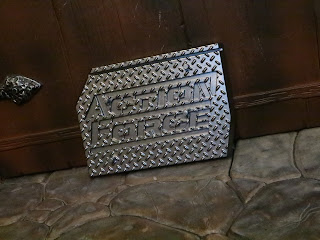 * I'm a huge proponent of action figures coming with display bases and the Action Force stands might be the best yet. The metal look of the stand is fantastic and there are four pegs on the base, making it extra versatile. See that little slit at the back? If you want to cut out the file card from the package you can even display it behind him. I've actually picked up some of these stands by themselves from Valaverse, too. They work great with the G.I. Joe: Classified Series figures as well. 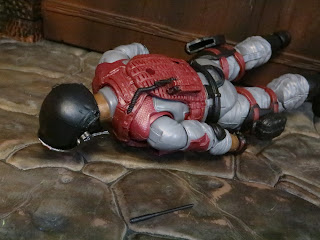 * My only complaint is that when I discovered the antenna is removable (and it isn't broken, it really does seem to be a separately molded piece) I tried to put it back in. It didn't stay put. To keep it in there securely I'll probably need a drop of glue. 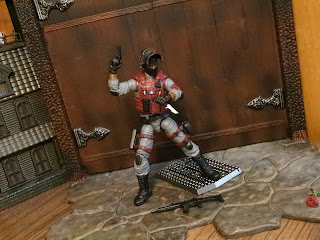 The Garrison Cavalry figure is excellent with one of the best color schemes in the Action Force line so far. Maybe even the best color scheme. That maroon and grey with black highlights just looks so incredible. As always, this is a well articulated action figure with plenty of accessories and extras, great paint and sculping, and the really cool armored visor. If he's not my favorite Action Force figure he's definitely in my top two. The changes in the smoothness of the articulation and the ability to swap hands with ease between series 1 and 2 of Action Force has really impressed me. Considering this is the first true year of the line I'm anxious to see what's in store for next year.