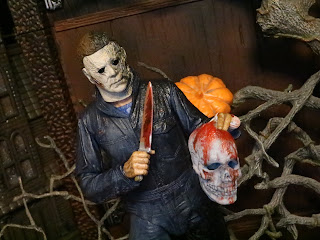 Halloween Ends comes out today but, since NECA hasn't released a figure from that film yet, the Halloween Kills version of Michael Myers is how we're celebrating today. Halloween Kills. I could probably talk about this movie all day if you'd let me, but since I already recorded a podcast about it last year, I'll mostly focus this review on the figure at hand. If you didn't listen to my ramblings on the podcast about Halloween Kills last year, I loved the first... 1/3 to 1/2 of the movie. I love the idea of the townspeople going on the hunt, accidently killing each other, and causing more chaos. Imagine how crazy things could have been if people thought they were seeing Michael Myers everywhere. Kind of a Ben Tramer from Halloween 2 response I also like the idea that Michael Myer's presence would have driven the other inmates he escaped with to go on killing sprees of their own. Michael's evil would just perpetuate more chaos and insanity. Too bad that about halfway through the film things got ridiculously cheesy with folks cartoonishy chanting and chasing a dude that could hardly walk. OK, rant over! NECA has released some excellent Halloween figures over the last few years since they apparently got the Halloween license back (well, at least the license for the newer films, Halloween 2, and Halloween 3: Season of the Witch) and this is another good one. He's not too different from the Ultimate Michael Myers based on the 2018 film, though since they're based on Michael from the same night it's understandable. This is Michael Myers after he's been burned in the trap Laurie Strode lured him into in her home, so he's definitely a bit more roughed up than we've seen him previously. Ready for another Halloween spent with Michael Myers? Then join me after the break... 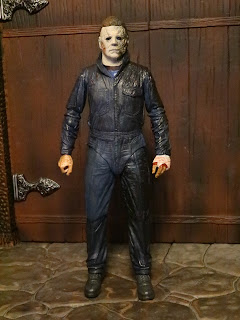 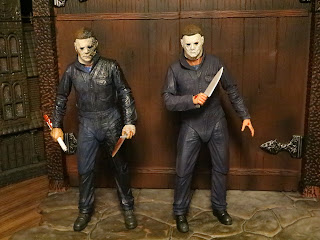 Comparison:
* The Michael Myers from Halloween Kills is on the left while the Halloween 2018 Michael Myers is on the right. What's the difference? The torso, the left side of his body, and the portraits are all different as they're presented as being burned and more tattered. I think all of the hands are different, too. The figures are very similar and while there's a bit of reuse, there's not as much as you might initially think. 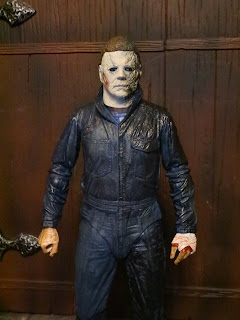 *  Like on the previous release, NECA nailed the look of Michael Myers and his boiler suit. It's not a complex costume but the details are really good on it and it looks as if it hangs realistically with lots of creases and wrinkles. The suit's torso is a softer piece of plastic that fits over the figure's build and keeps the mid-torso articulation hidden. Of course, this version has been badly burned, so the suit has places where it's been charred and melted along with some holes showing off the damage Michael sustained during his battle with the Strode women. It's cool to actually see a slightly different look for Michael since he pretty much always wears the same thing, even if it varies slightly between films. 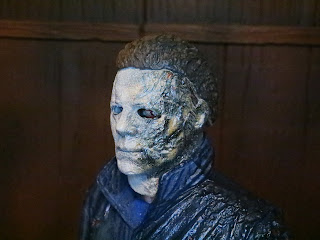 * NECA included two portraits for Michael Myers, one with visible eyes and one with the eyes blacked out. It really is a pretty crucial detail and I imagine everyone will have their preferred way to display the figure. The mask looks great, by the way. The overall design of the mask is excellent and the way NECA has depicted the burned rubber looks incredible. It's very creepy, especially when you can look through and see Michael's eyes peering out of the eyeholes at you. 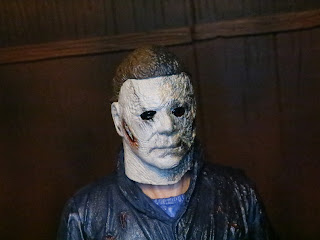 * I like the blacked out eyes better, though, and most of the time this is how I prefer to display my figure. It's just creepier and more mysterious. The bloody wound on Michael's right cheek is really cool, too. I really like that we saw Michael take some damage in 2018 and Kills. I like Michael being inhumanly and inexplicable, but there is also something to be said for still showing him able to be physically hurt. 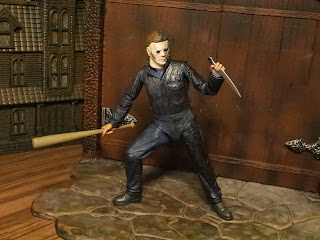 * The articulation is pretty much the same as any of the other NECA Michael Myers figures released in the past four years. While Michael Myers isn't super poseable and capable of great gymnastics feats, the articulation is still very solid. It handles both subtle and more action oriented poses quite well. Things like the double hinge elbows and the balljointed neck really allow you to tinker with the figure to get the fine expressions that you want. He's solid and feels pretty durable. I haven't had any quality control issues with him. 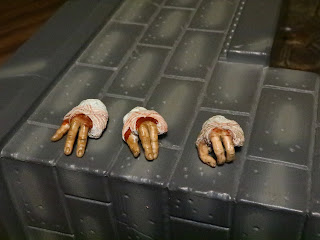 * Michael comes with three hands that you can switch around, all of which are missing two fingers (courtesy of Laurie). They're bandaged up here and look really gruesome. The different expressions do allow Michael to still hold his accessories, so they're pretty useful. 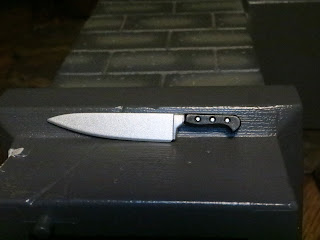 * Michael Myers comes with two knives, the first one being a clean, black handled kitchen knife. Michael Myers kills a ton of people in Halloween Kills, a number of them by stabbing. He kills over ten victims with a knife in the film, sometimes using multiple knives. Michael Myers has it in his contract that all action figures bearing his likeness have to come packed with a knife, so here's one of the knives. 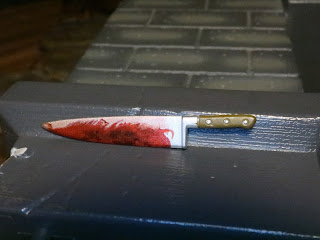 * Here's the second knife. This one is bloody and looks fantastic. NECA did a great job on that blood paintwork, didn't they? It's terrifyingly realistic 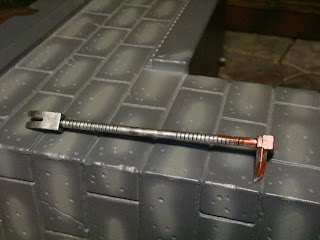 * Michael's third tool is the Halligan bar he takes from one of the firefighters and uses to kill those rushing to his aid. This is a really cool sculpt that looks very realistic. It's a super accessory. 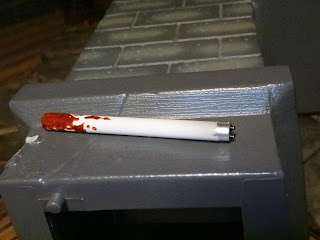 * I think the murders of Phil and Sondra are probably the most upsetting in the entire film (the older couple who are flying the drone in their house). While Phil gets stabbed over and over and over (and over), Sondra gets stabbed with a fluorescent lightbulb. It's horrifying but memorable, so NECA included the lightbulb with Michael. This is the most detailed 1/12th scaled fluorescent light bulb I've ever seen. It even has the bi-pin cap on the unbroken side. 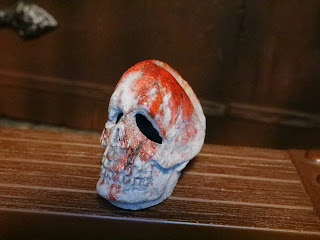 * While this version of Michael Myers doesn't come with a jack o' lantern, he does come with a really cool skull mask. It's the Silver Shamrock skeleton mask that originated in Halloween 3: Season of the Witch. A group of trick 'r treaters were wearing the masks in Halloween 2018 and they had a larger part in Halloween Kills attempting to terrorize Big John and Little John, the current residents of the Myers house. The skeleton masked kid runs afoul of Michael later on and, well, this is what's left. 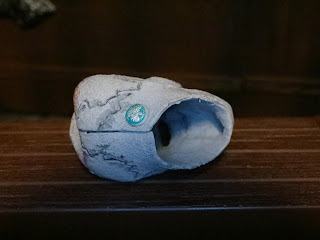 * The mask is rubbery and is sculped pinched a bit, like Michael is holding it in his hands. The paint work is fantastic and there's even a little Silver Shamrock logo on the back. Groovy! 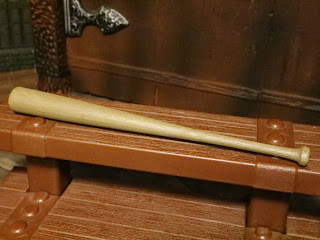 The Negatives:
* Michael Myers comes with a baseball bat, presumably Old Huckleberry. This bat looks nothing like the bat from the film, though. It's smooth, new looking, and doesn't have Old Huckleberry carved into the bat. It's also too large. I assume NECA borrowed it from another figure they've released, but I don't recognize it. 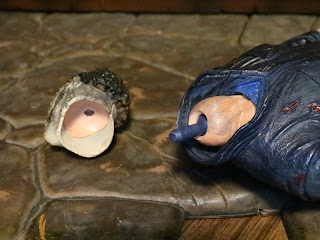 * The heads are kind of tough to swap. You might have to use heat to get the head back on for the first few times until it loosens up. 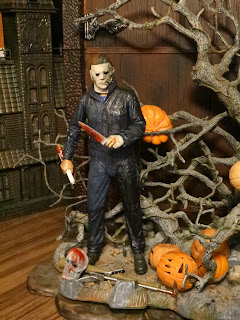 So... when are you watching Halloween Ends? Share your thoughts about it in the comments below! Hope it's better than the last one and ends this series of films off right. You know, this specific series, not the whole franchise. You can't kill the boogeyman. And remember, everyone is entitled to one good scare....