Action Figure Review: Battle Armor He-Man from He-Man and the Masters of the Universe by Mattel 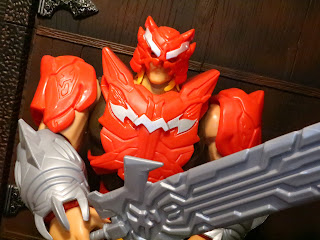 Mattel's new He-Man and the Universe line based on the Netflix series of the same name has two scales of action figures: The 5.5 inch traditional line and the 8 1/2 inch oversized line. The 5.5 inch line looks to include more characters in the near future while the 8.5 inch line is similar to other oversized, budget lines that often are called "Shampoo Bottle" figures due to their resemblance to the character shaped shampoo bottles of the 1980s. The first series of 8.5 inch figures includes He-Man, Skeletor, Man-At-Arms, and a Battle Armor He-Man variant. That Battle Armor He-Man variant is the one I'm checking out today as he was the first of the larger figures I found. Battle Armor He-Man works his way into nearly every Masters of the Universe line in some fashion and this one has a very unique look. He definitely seems like a design reminiscent of the 200x era variants, doesn't he? I'm only 5 episodes into the show and so far I haven't seen this version of He-Man pop up. It's likely just a variant made for the toyline. Let's check out this larger version of Battle Armor He-Man after the break... 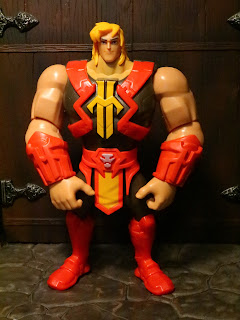 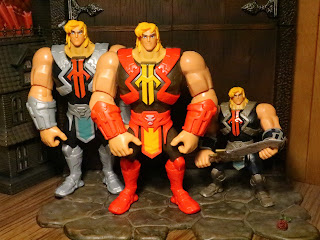 Comparison:
* Here's a quick comparison shot of Battle Armor He-Man (center), the 8.5 inch standard He-Man (left), and the standard 5.5 inch He-Man. This guy is mostly the same mold as the standard 8.5 inch He-Man but with a different torso and with red, yellow, and brown armor. 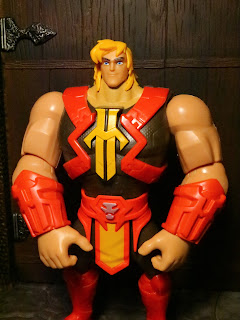 The Positives:
* In this series when Adam transforms into He-Man he bulks up and looks completely different, kind of like the 200x series or Revelation. He's very bulky with exaggerated proportions and more armor and clothing that He-Man is generally known for wearing. I really do like the logo on his chest as it's both a stylized "H" and reminiscent of the Power Sword in this series. The red and yellow here is a nice way of taking some traditional He-Man colors and mixing the around a bit. This is a very stylized figure which matches the stylized character designs of the show OK. It's not perfect but it's recognizable. 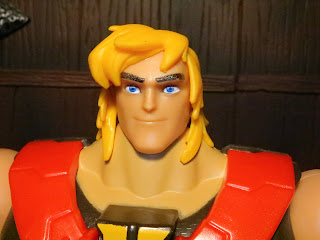 *  I'm not sure why Mattel seems to so often want to give He-Man a rather friendly face on most toys these days (it works best for Filmation inspired figures) but it works. He-Man's just a naturally good, heroic character. This take on He-Man has stylized superhero/ anime elements like the "messy" hair and lantern jaw; he kind of reminds me of the 200x He-Man, which I've been a longtime fan of. 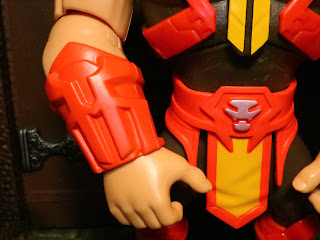 * I really do like the gauntlets on this version of He-Man. They're bulky, look like the could provide some protection, and have the He-Man "H" logo that also looks like the Sword of Grayskull/ Power Sword. The design on his belt is cool, too. I'm assuming it's the new stylized Grayskull face? 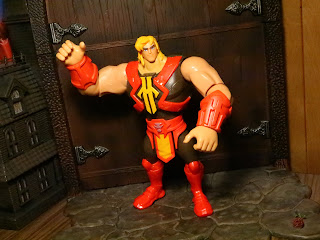 * He-Man is articulated similarly to the smaller 5.5 inch figures though the range of motion in the arms is much better with swivel/hinge elbows and shoulders. He also has the Power Attack feature: A spring loaded mid-torso balljoint. Twist him left or right and his upper torso springs back. Pull his torso back and he springs forward. He's not the most solid feeling toy (he feels hollow in the torso) but he does feel sturdy and durable. For some reason he reminds me of the larger scaled Superhuman Samurai Syber-Squad figure I had as a kid. 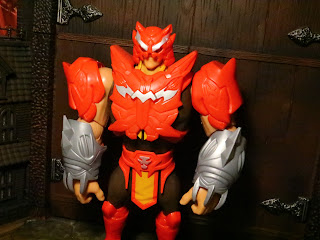 * He-Man's Battle Armor is made up of six pieces that fit onto the figure. Some are a little loose but overall it stays on fine for display and light play. There are some paint applications on the helmet and chest armor, too, so you've got a nice mixture of red and silver. It's a cool design though it's clearly weakened by the odd proportions and price conscious design of this line. 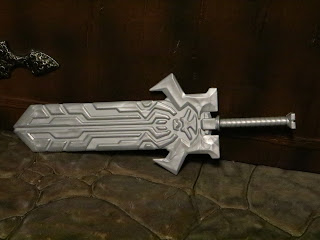 * He-Man comes with the Sword of Grayskull, which is what the Power Sword is called in the new show most of the time. It's a good sculpt and while it doesn't have any paint apps it does have a lot of sculpted detail. I love the look of the oversized Power Swords like the 200x version and this one. Maybe I played too much Final Fantasy VII in 9th grade? 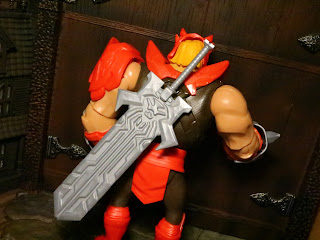 * Like on the smaller figures you can stow the Sword of Grayskull on He-Man's back by plugging the sword into the slot on his harness. Now his hands are free for punching! 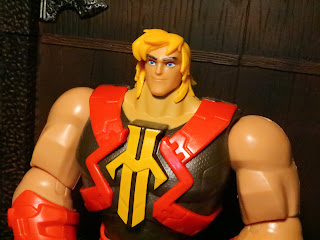 The Negatives:
*  Smaller heads are definitely common in some stylized designs but He-Man's head definitely looks too small here. I'm not seeing this as a stylized look but as an inaccurately proportioned head. The head looks designed for a 6 inch figure. 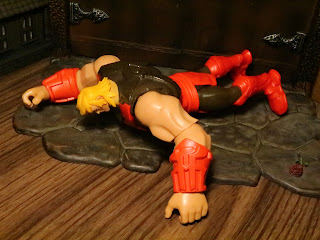 * He-Man's boots seem to a weird shape or perhaps it's do to his bulky frame but I cannot keep He-Man standing very well. He constantly wants to tilt forward. Oops! 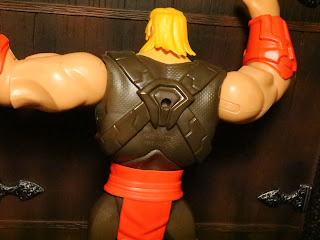 * The back of the figure is unpainted which is pretty lame. That's always such a cheap, cheap move and it drives me crazy. 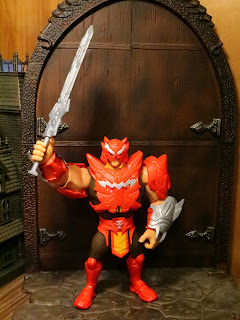 I was always fascinated by toys with lots of armor pieces. Stuff like the various Bruce Wayne figures that transformed into Batman always intrigued me and were some of my first picks from the toylines they came in. That's kind of what this version of He-Man reminds me of. He's not the best toy out there and he certainly isn't going to compare to collector focused items on the shelves but for collectors who just love picking up random MOTU items (like me) or for folks buying He-Man toys for kids this one isn't bad. He's a fun figure to mess around with. I like the Power Attack gimmick in this line and the ability to pop on the armor does give He-Man some more play/ display value. He's a Good and a 1/2 figure that looks pretty impressive in the box. These are clearly built to come in at a specific budget and to appeal to the younger MOTU fans out there but there's nothing wrong with that. Us crusty ol' MOTU fans have plenty of lines from plenty of different companies to collect if we want vintage accuracy.
I've reviewed so many action figures of Prince Adam/ He-Man that he has his own review archive. Check out Fabulous Secret Powers for more He-Man and Prince Adam stuff!
For more He-Man and the Masters of the Universe reviews check out the following:
He-Man and Ground Ripper
Skeletor and Panthor
Posted by Barbecue17 at 11/05/2021