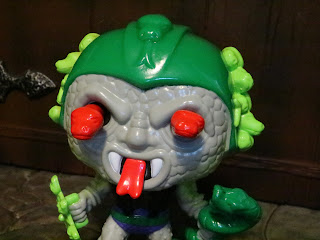 Lately it feels like Mattel and most folks making licenses merchandise have been neglecting the Snake Men. Mattel hasn't released any Snake Men since Masters of the Universe Classics and Super7 never made any of the Snake Men in the M.U.S.C.L.E. or ReAction lines. Neither has anyone else. Funko is currently the only company giving the Snake Men any attention, thus it's very cool to be getting one of the later Snake Men like Snake Face here. Snake Face was an exclusive for NYCC 2021 that is shared with GameStop and you can still find him there in store if you shop around. With some similarities to the mythical Medusa such as the ability to turn heroes to stone, Snake Face is known as the "Most Gruesome of the Snake Men Warrors." I never had him as a kid which is surprising as I loved the Snake Men and I was really into MOTU around 1986 and 1987. It's great to get some of the underappreciated characters from Funko as POP! vinyls and today Snake Face is getting some attention. Join me after the break as we check out Snake Face.... 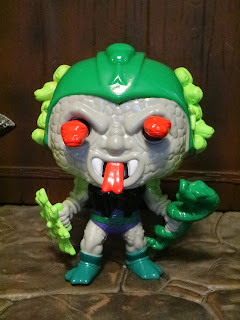 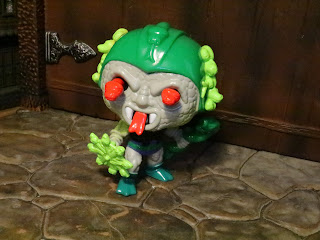 * Snake Face stands well, has a fairly neutral pose, a swivel neck, and he's toting two different weapons. What more is there to say to start things off? He's a solid POP! vinyl. 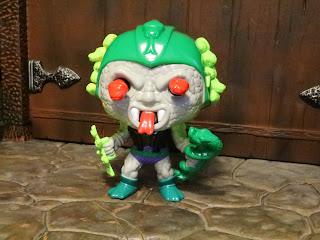 * Snake Face looks really, really cool. His skin is reptilian but also kind of stone like and he's wearing his traditional black armor with a green Snake Men symbol. There aren't any hidden snakes popping out from under his chest panels but the sculpt of the armor is excellent. 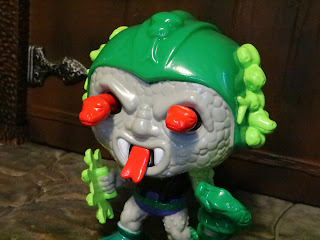 * The headsculpt is incredible and one of the coolest POP! vinyl heads out there. The vintage toy featured a pop out tongue and pop out snake eyes and while there is no action feature here the eyes and tongue are sculpted as if they're popping out of Snake Face's face. It's really crazy looking and kind of creepy, too. 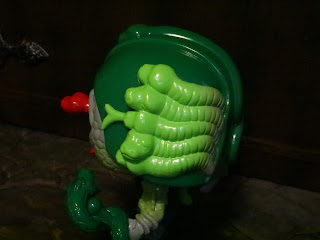 * Snake Face's snake themed helmet even has serpents all over the sides. Creepy! 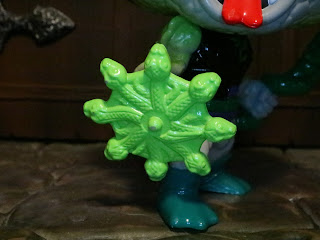 * In his right arm Snake Face is sporting his green serpent shield. It features eight  sculpted snakes spiraling out from the center and is a pretty unique looking shield. 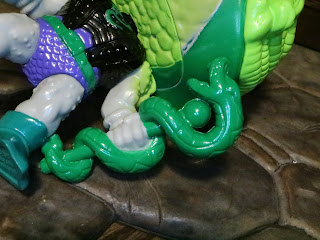 * His second weapon is a Snake Men staff molded in deep green. Most of the Snake Men carried these totems and Snake Face is no exception. 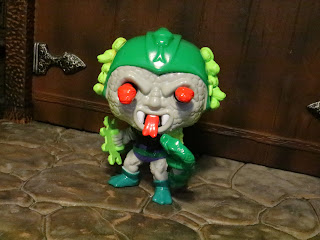