Minifigure Review: He-Man and Ground Ripper from Masters of the Universe: Eternia Minis by Mattel 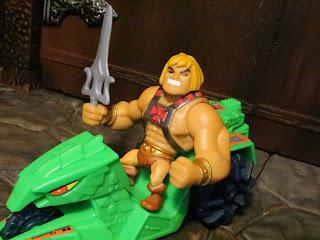 As we're approaching the end of the year I'm dedicated to not having a bunch of wrap up reviews in early 2022 like I did last year so I'm spending November going through mini review marathons to wrap up some toylines that I'm behind on reviewing. Today I'm beginning a very short look at some short figures from Mattel's Masters of the Universe: Eternia Minis and I'm going to start by looking at He-Man with the Ground Ripper. Ground Ripper is apparently the new name for the Road Ripper as Mattel also used that name in the He-Man and the Masters of the Universe line, possibly due to some sort of issue with trademarks or something. The vintage vehicle, called Road Ripper, was released in 1984 and was a simple ripcord powered vehicle inspired by the classic Evel Knievel stunt cycle. It had only minor appearances in the minicomics and the Filmation animated series but since it was such an inexpensive and durable vehicle, many kids had these and you can still find them pretty easily. The Road Ripper surprisingly never made an appearance in the 200x line nor Masters of the Universe Classics where it seemed like an ideal fit as a recognizable but simple vehicle. It's cool Mattel is revisiting it here in Eternia Minis. Let's check this 2-pack out after the break... 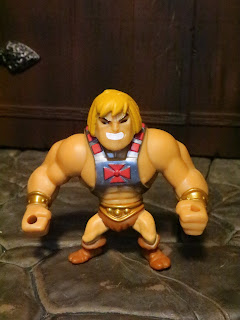 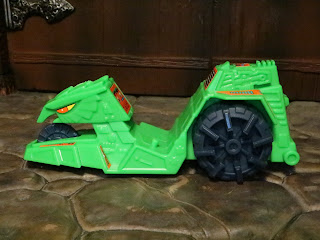 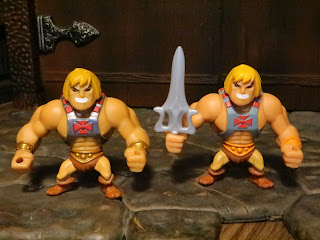 Comparison:
* The He-Man included in this set is on the left while the standard series 1 He-Man is on the right. What's different? This new He-Man has metallic bronze cuffs and a belt and a metallic silver harness. It's a small change but it does look pretty cool. 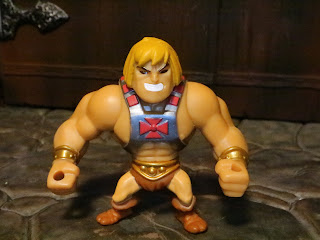 The Positives:
* What more is there to say about this little guy that I haven't said over and over? He's brawn, comical, and caricatured in a fun way. I love the metallic paint applications on him, too. It's a nice way to differentiate this guy from the previous releases and adds a bit more pizazz to him. 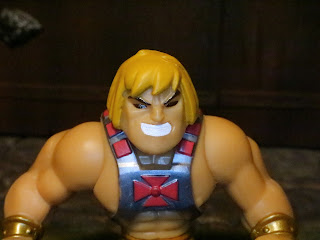 * The headsculpt is quite nicely done, too. While we've seen it before it's no surprise that Mattel is using it again. The over sized grimace (or is it a grin?) definitely feels like an exaggeration of the vintage toy's expression while the large, lantern jaw seems fitting for the most powerful man in the universe. 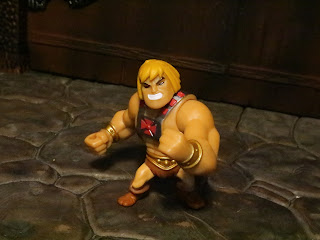 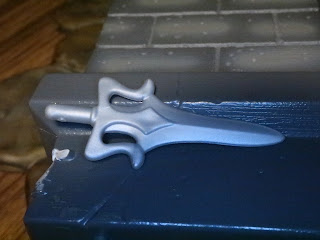 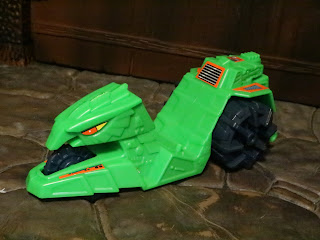 * The Ground Ripper/ Road Ripper looks pretty cool. It's a simple piece with stickers for the details but it's recognizable, bright, and very sleek. 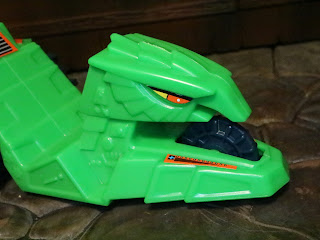 * The headpiece is very traditionally MOTU with an animal-like head. Is this supposed to look like a dragon, perhaps? 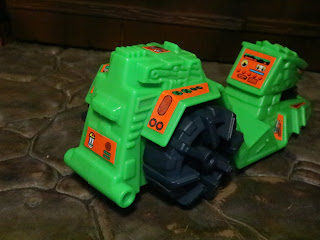 * The back of the vehicle has more stickers and the look of the bulky technology that seems to be prominent in Eternia. The tires are really cool with long treads coming out of them. Presumably that's why the vehicle is called the Ground Ripper/ Road Ripper. 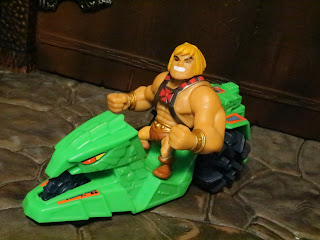 * Since the Eternia Minis don't sit you'll hve to use the foot peg on the vehicle to stand He-Man on there. He stays pretty solidly and you can swap out figures if you want someone else to ride. 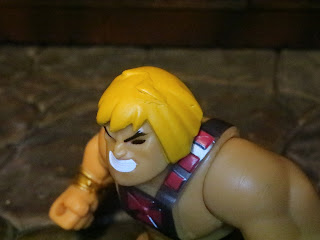 The Negatives:
* He-Man's hair has some weird gloppy paint drops on it. It's tough to see here but it looks odd in person. 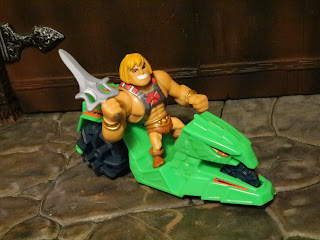 The Ground Ripper is a pretty cool little vehicle. It doesn't have any real features or anything but it's neat to see it in toy form again after so long. I also like this He-Man. I mean, we've seen this sculpt so many times now but at least Mattel went and gave this one some unique metallic paintjobs. They really do give He-Man a different look that stands out. Currently Mattel seems focused on the MOTU: Revelation Eternia Minis though most of them fit in perfectly with this line so you can still grow your collection even if you're only interested in the vintage looks. I wonder what the next vehicle we'll see in the Eternia Minis line will be?
I've reviewed so many action figures of Prince Adam/ He-Man that he has his own review archive. Check out Fabulous Secret Powers for more He-Man and Prince Adam stuff!
The only other version of the Road Ripper/ Ground Ripper I've reviewed is the Netflix series He-Man and Ground Ripper set.
For more Masters of the Universe: Eternia Minis check out the following:
Anti-Eternia Ram Man
Anti-Eternia Teela
Battle Armor He-Man
Battle Armor Skeletor
Beast Man
Buzz-Off
Evil-Lynn
Faker
First Appearance Trap Jaw
Golden Armor Skeletor
He-Man
He-Man (Series 2)
Horde Zombie He-Man
Jitsu
Man-At-Arms
Ninjor
Ram Man
Serpent Claw Man-At-Arms
Skeletor
Skeletor (Series 2)
Skeletor and Roton
Slime Pit Multipack
Stinkor
Trap Jaw
Posted by Barbecue17 at 11/17/2021