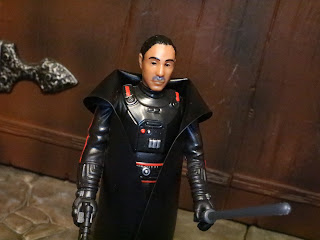 It's time for he last figure in this mini marathon of Mandalorian reviews: Moff Gideon! We need a good villain here and Moff Gideon certainly fills the bill there. Giancarlo Esposito is fantastic as Gideon and definitely helps to build the bridge between the more traditional military might of the Empire and the new era of Imperial remnants and warlords. This figure definitely will remind you of Kenner's Darth Vader and TIE Fighter Pilot figures but there is a great headsculpt and some cool accessories to add some uniqueness here, too. Let's take a look at Moff Gideon after the break... 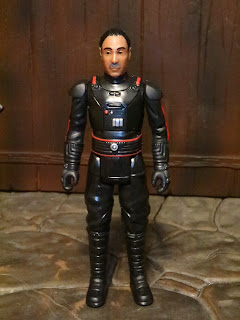 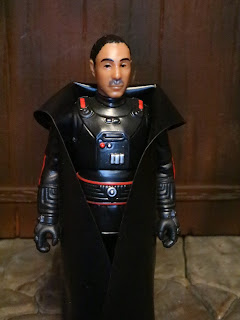 The Positives:
* Clad in black Imperial armor that sort of resembles a cross between an Imperial Officer and Darth Vader with elements of a TIE Fighter Pilot, Moff Gideon is a sharp looking guy. He has a fantastic costume and Hasbro definitely made him look very cool here, albeit in a Kenner style. The details on his chest panel and his gloves are well worth pointing out as are the red highlights on his outfit. 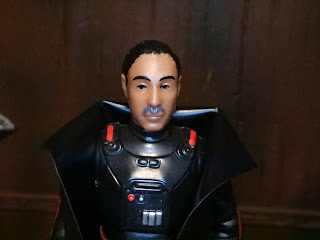 * This is a pretty good portrait for a Kenner styled figure, isn't it? There's more character in Gideon's face than on most retro styled figures and the head shape is pretty spot on. Not bad! You really can tell who this is! 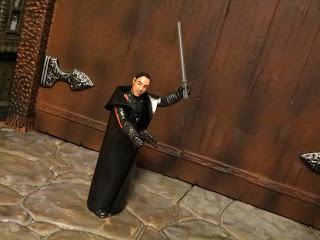 * Just like the other figures in this series (and pretty much every other Kenner inspired retro action figure) Moff Gideon is articulated at the big 5: Hips, shoulders, and head. He's well made with smooth joints and feels pretty accurate to the vintage Kenner figures. What more were you expecting? 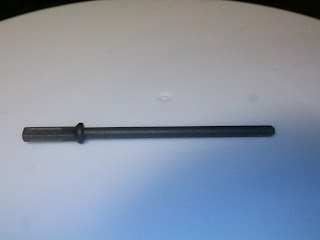 * Moff Gideon comes with two weapons, the first of which is the Darksaber, the black bladed lightsaber created by the Mandalorian Jedi Tarre Vizsla. Somehow the Darksaber came to be in Gideon's possession after the Great Purge of Mandalore. The Darksaber in this line is very similar to the lightsaber of Luke Skywalker in his Bespin gear or in his Jedi Knight outfit from the vintage Kenner, though now it's molded in a translucent grey plastic. It's pretty cool! 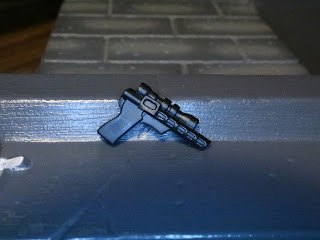 * Next up for Moff Gideon is a more standard blaster pistol. It's accurate in a Kenner sort of way and looks pretty sleek and lethal. 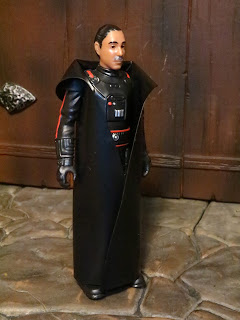 * The Empire has some snappy dressers and Moff Gideon is one of their stars in that area. He sports a really slick cape which is represented here by a vinyl cape. It looks pretty good here, but...

* By the end of the Empire Strikes Back era of figures Kenner was using soft goods on their figures. I'm OK with the plastic goods when they fit the look and Gideon's isn't bad (it's obvious the cape is a throwback to Vader) but it's a bit wide, making this look more like a trench coat rather than the sporty cape Gideon wears. 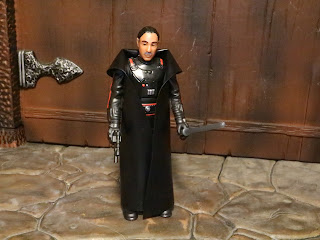 Moff Gideon is a pretty cool figure with some nice extras. Hasbro did a swell job on making him feel like a vintage Kenner figure and he's nicely detailed. I do wish he'd gotten a slightly better cape, though. Still, he's a Good and a 1/2 figure and cool on his own but probably just as desirable due to the inclusion of the Darksaber. I'm enjoying Hasbro's Star Wars: Retro Collection line and I'm glad they've already announced a second series. Hopefully they release more figures per year than what they're doing, though. I would think releasing a steady stream of never before made OT figures and select Prequel Trilogy figures would be like a license to print money for Hasbro.

If you're looking for more of Moff Gideon check out my review of the Black Series Moff Gideon.

For more reviews from the Star Wars Retro Collection check out the following:
Cara Dune
The Child
Greef Karga
Kuiil
The Mandalorian
Posted by Barbecue17 at 11/20/2021