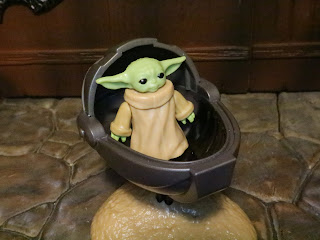 I don't have a very large collection of vintage Kenner Star Wars figures. I have some of my favorites and sentimental pieces on display and some other random pieces in storage and while I like the line and I appreciate it, the vintage toys were a little before my time. I do like the retro action figure aesthetic, though, and that combined with my love for The Mandalorian prompted me to pick up some of the Star Wars: Retro Collection figures based on the show. These typically retail for around $10 bucks but with some shopping around on the Amazon warehouse deals I found many of the figures for closer to $6 or $7 bucks. I'm an opener who doesn't need a pristine card, anyways. I'm getting ready to start another mini review marathon of these figures and today I'm starting off with the figure everyone probably wants from this line, Grogu, better known in merchandising as the Child or Baby Yoda. Grogu is a tiny little guy. Since he's part of the same species as Yoda he ages differently and hopefully will live a long, long full life. Interestingly he was born the same year as Anakin Skywalker (41 BBY). That's kind of weird, isn't it? Could that be significant at some point? Anyways, let's take a look at the Kenner inspired the Child after the break... 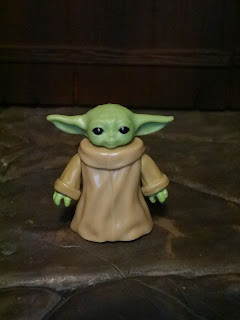 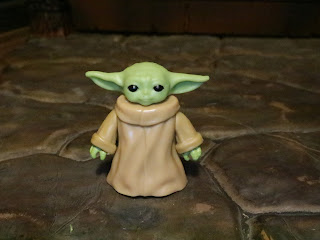 The Positives:
* There's no denying that Grogu is one of the cutest characters out there and Hasbro even managed to retain his cuteness in the vintage Kenner style. He honestly doesn't look too different from the Black Series figure but there's still a nice, clean simplicity to the sculpt that makes this look like a later Kenner figure. Maybe late Empire/ early ROTJ era? He's a little oversized scale-wise but otherwise he'd be an accessory. 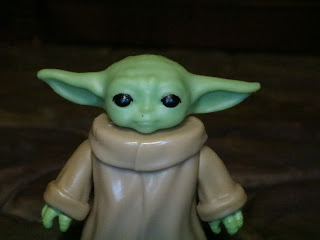 * The headsculpt is simple with big eyes and the standard calm, peaceful expression most of the vintage Kenner figures had. I think it's fitting and looks appropriate. His ears are so adorable, aren't they? 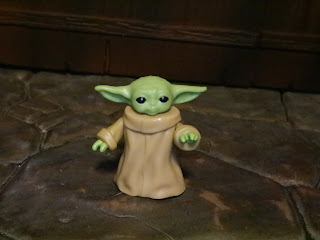 * Grogu is very basic in articulation, but that's what you've signed up for with this line. Simple swivel shoulders and a swivel head. He's sturdy and feels well made so no harm there. He's meant to be displayed along with your other vintage Kenner styled figures so his neutral pose is just fine. 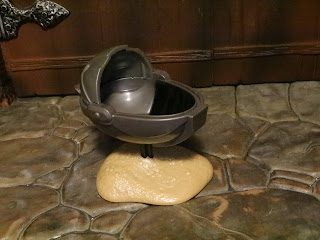 * Something that doesn't feel very "Kennerish" is the inclusion of the pram for Grogu to ride around in. I do like it, though, and it's fantastic that Hasbro included it as it adds a lot of value to the set. The Pram "floats" using a plastic beam that plugs into the sandy desert base. 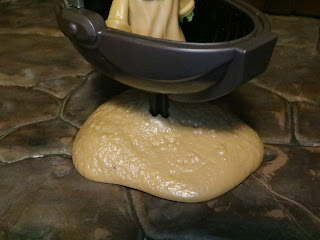 * The base isn't just a flat plastic piece and instead has a sculpted sand texture to it. Keep Anakin away! 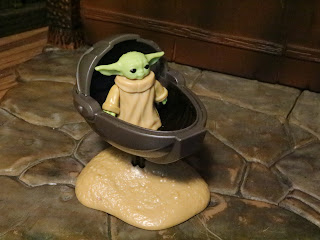 * Grogu fits inside nicely. He looks like a boss riding around inside the pram. 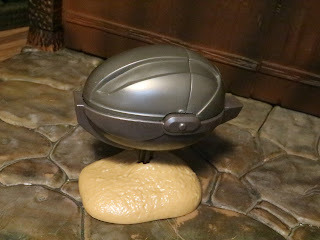 * When danger strikes Grogu can pop up the cover on the pram to give himself some additional protection. It's a simple plastic cover that snaps on top. It's very well done! 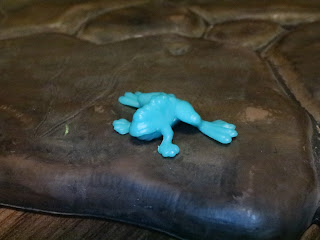 * Look! Baby Yoda comes with a snack! He comes with a little blue frog that does feel very much like a Kenner accessory. It's a neat little piece and another fun accessory to supplement a figure as small as Grogu. 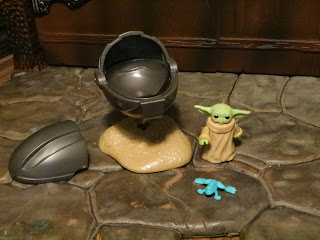 Due to his undeniable cuteness and his really nice pram accessory, the Child/ Grogu/ Baby Yoda might just be the best of the Retro Collection figures so far. He's a really well made little figure and with all of the extras he comes with, the $10 dollar price point seems just right. I find myself liking this little fellow better than the Black Series Grogu releases. He's just a fun little toy that gets an Epic rating from me. I'll be checking out a few other figures in this line over the next couple days so be ready. Next time I'm checking out Greef Karga...

For more of Grogu/ the Child/ Baby Yoda, check out the Black Series Phase III The Child and the Phase IV Din Djarin (The Mandalorian) & the Child and Speeder Bike, Scout Trooper, and The Child.