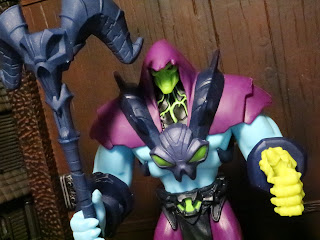 As I continue on my marathon of reviewing figures from Mattel's He-Man and the Masters of the Universe toyline based on the Netflix series of the same name it's time for us to look at the basic 5.5 inch version of Skeletor. Skeletor looks quite cool in this show though he's been used rather sparingly thus far (I just finished episode 7 a few hours ago). A variant of this figure is also available with the Panthor motorcycle which I reviewed Thursday but it's the same sculpt with a slightly different paintjob. This one has a better, slightly more intricate paintjob and just looks better. Let's take a look at the evil Skeletor after the break... 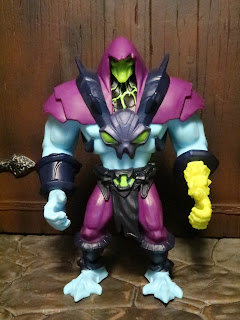 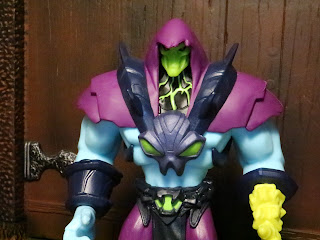 * I really like the Skeletor design on the show and this figure doesn't do a bad job of replicating the sculpt of it. It's a very stylized toy with a simple paintjob and a clean sculpt. I really like how Skeletor's armor looks like the ram skull with the horns wrapping around his shoulders. That and the snake on his belt are fantastic details and the green highlights really improve the overall look of the toy. 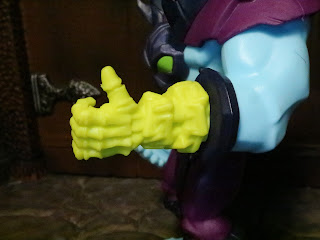 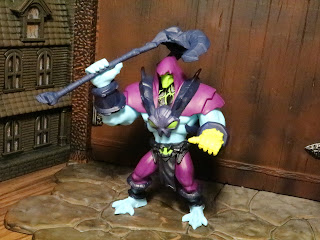 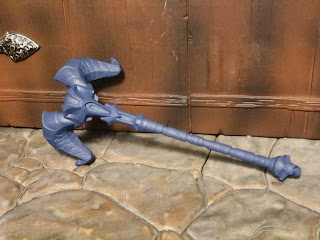 * The Havoc staff is incredibly powerful in He-Man and the Masters of the Universe and grants Skeletor a great deal of power. It's one of two totems once held in Castle Grayskull though it's cursed as it represents the force of havoc. The sculpt is really nice on the front of this with very pronounced horns on the ram skull. This version is a slightly different shade of purple than the one included with the Panthor motorcycle set. 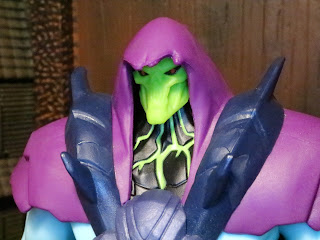 * I don't dislike the look of Skeletor but there's no detail visible on his face. Some paint applications or something are really needed to help keep everything form just blending into a formless mass. The details present are so slight that you can hardly notice them. The teeth should be more pronounced and visible. 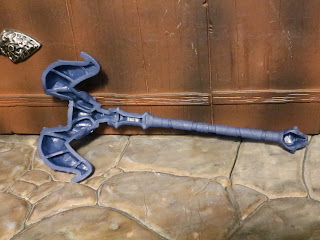 * I like the Havoc Staff from the front but flip it around and you've got... well, this. It's not even sculpted the entire way around! I really hate stuff like this as it just comes across like cutting corners. 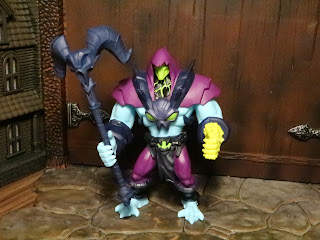 Skeletor is fun but little stuff like the face that just doesn't have much visible detail and the cheaply molded Havoc staff really are frustrating and take away from what could have been a fairly cool, stylized take on Skeletor. It's clear this is a line aimed at kids versus collectors but I still wish Mattel would have paid a bit more attention. Skeletor gets a Good from me. He's not a poorly made toy but there's a lot of unrealized potential here. It sucks being disappointed by this guy. I'm enjoying this new take on MOTU in the show and some of the toys are cool but I wish they were more than just average. MOTU should never be just average; not in a world as epic as Eternia.

For more He-Man and the Masters of the Universe reviews check out the following:
5 1/2 inch
Chaos Snake Attack
He-Man
He-Man and Ground Ripper
Skeletor and Panthor
8 1/2 inch
Battle Armor He-Man