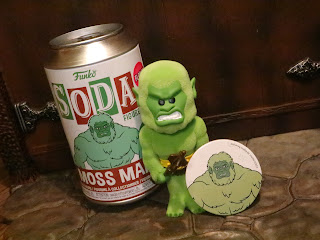 Funko had four Masters of the Universe exclusive items for SDCC 2020, all of which were sold online this year due to the convention being cancelled due to Covid-19. Two of the exclusives were POP! vinyls (Blast-Attak and Clawful) while the other two were from the relatively new Vinyl SODA line. Those two figures were Trap Jaw and Moss Man and I'm starting with Moss man today. As you may be aware, Moss Man is one of my favorite MOTU characters, if not my favorite, so I was thrilled to see him this early in the Vinyl Soda line. Only 3,000 Moss Man vinyls were made which makes him, along with Trap Jaw, the rarest "non-chase" release yet. While he's not scented, which is a real shame, he is flocked. And he's Moss man so he's automatically one of the coolest figures around. Let's get lost in the woods and check out Moss Man after the break... 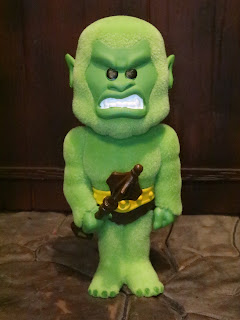 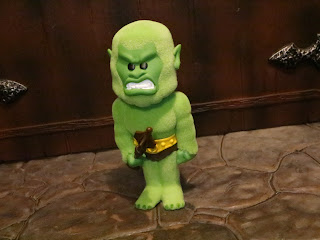 * I love the overall aesthetics of the Vinyl SODA line as they have a style of their own and are quite comical. They're not as stylized as most of Funko's other vinyl lines though the head is definitely a bit oversized. They're not articulated at all, either, but they do make for a cool display piece. They're too large to be considered minifigures, but their clean, colorful appearance does make them display well quite well. I always think they look like 1970 breakfast mascots. 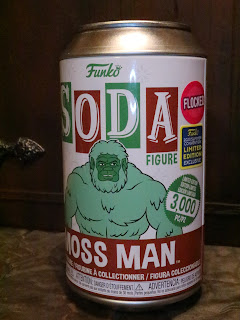 *   I absolutely love the cans these come in! The soda can design is so incredibly cool and makes for a rather unique display piece on a shelf. Moss Man soda would probably be a very floral ginger ale with a nice bite to it. I absolutely love the use of the Filmation styled Moss Man as he's such a fantastic character design and looks so different from Beast Man. The can displays all of the expected labels (including a "flocked" notice) while the back shows off the figure and includes all of the legal info, etc. The top of the can separates so you could use the can to store trinkets as well, and it's even sculpted to look like the top of a soda can. It's made from a much more durable metal than your average soda can, too, so it's quite a nice collectible. 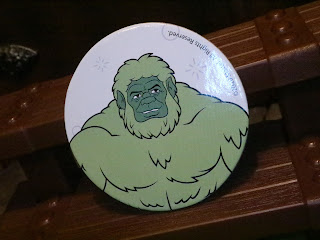 *  Inside the can is a round, sturdy cardboard disc. It's kind of like a POG, though a bit larger. On the front is Moss Man's handsome mug while the back has the figure's name and the run amount listed (3,000). 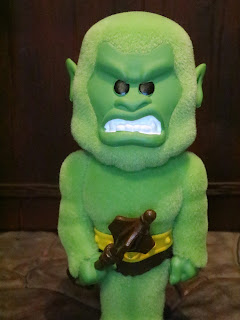 * Moss Man is really cool. First of all, he's flocked. That's always a plus with a Moss man figure. Second, I love the look of the figure. It's possible that Funko could reuse the head for Beast man, but everything else seems unique to Moss Man as he has a bare torso and he's carrying his mace. 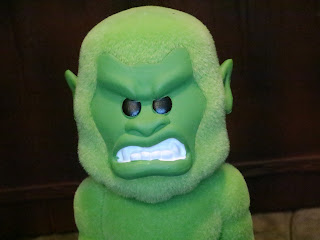 * While the head doesn't quite look like the Filmation inspired Moss Man seen on the can it definitely looks like Moss Man to me. Could you see this being used for Beast Man, too? Maybe, but there's no ridge or anything so I believe it's specifically a Moss Man sculpt. Personally, I like the characters having their own unique headsculpts, so this is a win in my book. 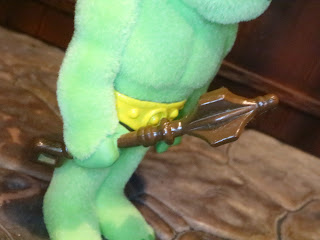 * Moss Man is rocking his mace, just like the vintage toy! Looks good to me! 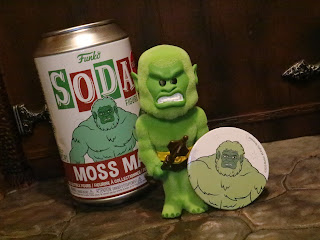 I absolutely love this series of figures! I'm pretty thrilled to get Moss Man so early in the line. He looks great and adds another hero in the mix to give He-Man some support. Moss Man is probably one of the most powerful beings on Eternia, so he's a great ally to have. His Vinyl SODA is a great piece to have for your collection, too. He's flocked, fun, and the soda can is really just a cool display piece. I hope Funko keeps this line going as I'd love to see more Eternians and Etherians in this style! Moss Man is a Great and a 1/2 collectible.


Moss Man is one of my favorites and along with the vintage Moss Man I've also reviewed the 200x Moss Man, the M.U.S.C.L.E. Moss Man, a stick of Eternia Pine Deodorant, the MOTUC Moss Man, the Dorbz Moss Man and Beast Man 2-pack, the POP! Moss Man #568, the POP! + Pez Moss Man dispenser, the Pint Size Heroes Moss Man, the Masters of the Universe Minis Battle Armor Skeletor and Moss Man 2-pack, and the Mega Construx flocked Moss Man that came with the Battle Bones set and the standard Moss Man.