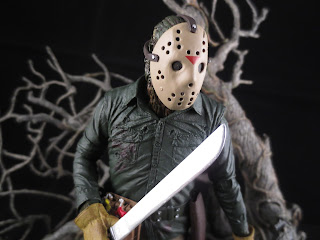 I really am a fan of what NECA is doing with these new Ultimate edition action figures. With costs rising and basic 6 inch figures from companies like Mattel and Hasbro hitting the $20 mark and above, getting one of NECA's well crafted figures with plenty of extras like swappable portraits and multiple accessories in attractive boxes for around $25 really feels like a value. NECA has released an Ultimate Freddy Krueger and an Ultimate Leatherface and, at the tail end of 2015, they also released the Ultimate Jason Voorhees from Friday the 13th Part VI: Jason Lives which I'm looking at today. While NECA has released a few Jason figures in their Mego inspired line, if my memory serves me right it's been a few years since they've released a straight up action figure of the guy. I remember how big of a deal it was when McFarlane Toys first released Jason in their Movie Maniacs line back in 1998!  Well, this guy is definitely an improvement! Want to get a bit closer to him? Then join me after the break... 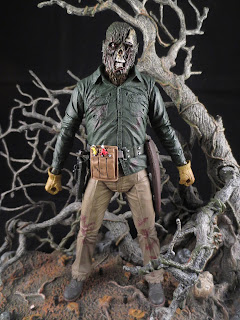 Sculpted by Kyle Windrix and Chris Gawrych, fabricated by Anthony Minichino, and painted by Jon Wardell and Geoffrey Trapp. 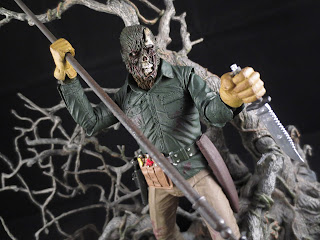 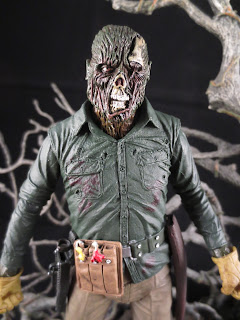 * The sculpting and paintwork on this figure is hideous, but that's a good thing! NECA really has created a very definitive figure of the later version of Jason Voorhees here. With his zombified face, axe wound to the head, skeletal teeth, and missing left eye, you'll be glad that you can throw a hockey mask over this fiend's face. The green shirt he's wearing is incredible, too. It's insanely detailed and has a fantastic texture. I love the frayed chest pockets and missing buttons on the pockets, too. The detail that NECA puts on even the most mundane aspects of their figures always impresses me. NECA is one of the few companies who could convince me to buy an action figure from a property I have no interest in solely because of how great their figures are. 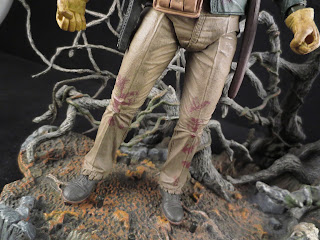 * Jason's simple trousers have some great blood plaint spatter on them. They're not drenched or anything; they just show that he's been up to his old tricks again. I really like the frayed hems on the bottom of his pant legs, too. Jason definitely seems like the kind of guy who lets his extra long pants just wear down rather than hemming them. 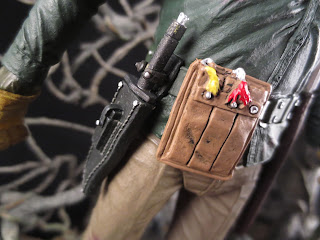 * Jason's belt is awesome. It's an old military styled pistol belt with attached working sheathes for his knife and machete and a handyman's pouch carrying some handy little tools. I'm actually not 100% sure what the red and yellow things are (if you know, please tell me!) but they look cool and add some real visual pizzazz to the figure. 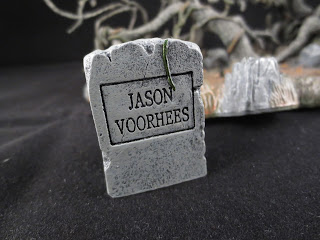 * It's pretty cool that Jason comes with his tombstone. He wanted it to say "Here lies Jason Voorhees. And why not?" but he ended up just getting his name. Not even a date. The sculpt is nice and this is a pretty good approximation of the tombstone in the movie, even down to the green creeping vine hanging over the front. At first I thought it looked a little too small but after looking at some film stills I think it's perfect. No one really wanted to spend a lot of money on Jason's headstone. 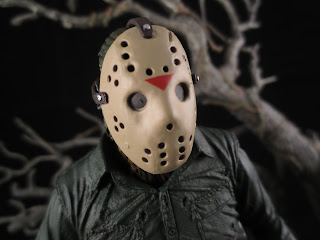 * Jason's mask looks incredible. Honestly, as crazy cool as his zombie face is, this mask is even more interesting just because of how it's been crafted. The paint is fantastic and I love the fact that NECA didn't leave the eye holes open. Remember, you don't see Jason eyes through the mask, so this was a cool way to pull off that effect. 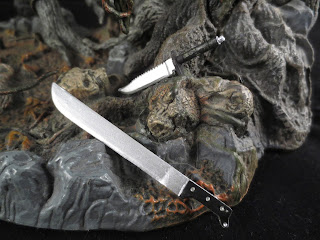 * He wouldn't be Jason if he didn't come with some sharp stuff, would he? Jason comes with a survival knife and his classic machete. Both of these have a nice silver sheen to them and some black paint applications to craft the hilts. They're nice looking weapons and should definitely be a boon to Jason as he goes through and slaughters every toy on your toy shelf. 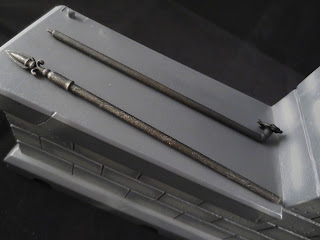 * Lastly, Jason comes with the fence post that Tommy Jarvis stabs into Jason's corpse. If you don't remember, the fence post gets hit by lightning and Jason Voorhees is revived as a killer zombie. Yup. Anyways, the fence post has a weathered paint job that helps it to look like wrought iron. it comes in two pieces but assembles in the middle via a small peg.  Disassembling it is the only way to get it into Jason's hands, so be careful with the peg! 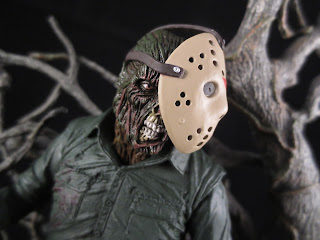 * I just wanted to include this picture because I think it illustrates one of the benefits of having the mask be a removable accessory rather than an extra head. Now sometimes extra heads absolutely look better but here it's really fun to be able to play around with the mask. Plus, the infamous hockey mask is just a cool accessory to have. 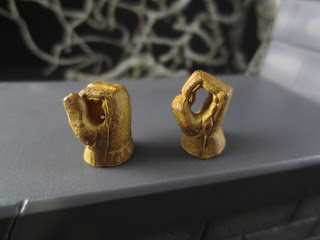 * Jason comes with two right hands that can be swapped out. One has a grip better suited to the knife or fence post while the other is more square shaped and is intended to hold the machete. I found the rounded grip took a bit of work to ensure that it held the accessories (the hole was too small at first) so just use caution when swapping these out and inserting something like the fence post or knife into the hand. 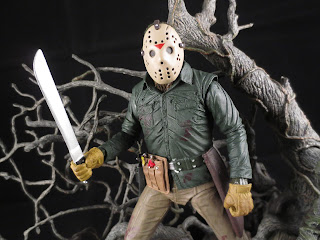 If you ask me, then the four pillars of the modern horror/ slasher genre are Freddy Krueger, Jason Voorhees, Leatherface, and Michael Myers. NECA has now nailed three of those in these new Ultimate editions and they've done a great job with all of them. Jason gets another Epic rating from me as I'm not sure you'll find a better figure of this guy out there. He's really worth every penny! Now, bring on an Ultimate edition of Michael Meyers, NECA! Give him a knife, a pumpkin, a sheet with glasses disguise,  and Judith's gravestone and I'll officially call you the greatest toy company around! 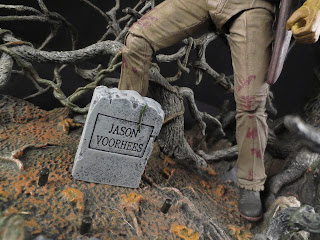 The only other Jason figure I've reviewed is the Funko ReAction Jason Voorhees from the ReAction Horror Series.


I have reviewed a few more of these Ultimate Edition figure from NECA, though, including: