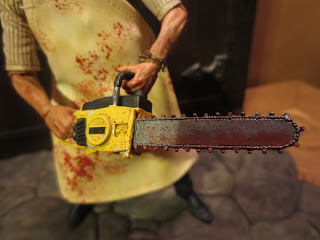 A few years ago I reviewed McFarlane Toys' Movie Maniacs Leatherface. I still love that figure but it's now 17 years old! Wow! One of the jokes that everyone seems to tell is that NECA is on a quest to make the figures Todd McFarlane said he could never make and to release better versions of the ones he did make. There seems to be some truth to that because here's a new Leatherface figure that nicely updates the older one. Released as one of their deluxe boxed Ultimate Editions, Leatherface comes in a 5 panel window box that celebrates the 40th Anniversary of The Texas Chain Saw Massacre. By the way, have you ever noticed that the actual title card for the film is "Chain Saw" and not "Chainsaw" as you might expect. Bizarre, huh? This packaging saws "Chainsaw" which is what is on the actual movie poster. Anyways, let's cut to the chase and start checking out old Leatherface here. Join me after the break... 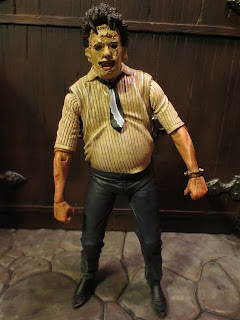 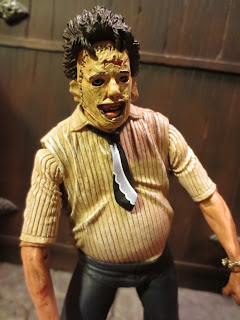 
*This figure perfectly captures the odd and gruesome nature of Gunnar Hansen's portrayal of Leatherface. First, the body just looks large and intimidating.  Leatherface's ill fitting clothes look perfect and the paintwork really adds those final touches to everything: Dust on his boots and jean bottoms, sweat and grim on his sleeves, and blood and grease on his arms. And how about that bizarre little tie, huh? 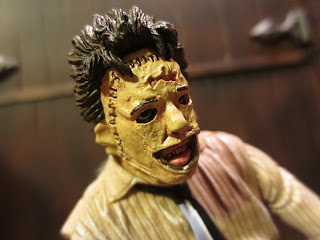 * Not only is this a great Leatherface headsculpt, but NECA really did something cool by layering the mask over the more traditional headsculpt underneath. This gives the figure and excellent effect of actually being a guy in a mask versus this being Leatheface's real face. Through the holes in the mask you can see his teeth and eyes. The wild hair on this guy just looks fantastic, too! 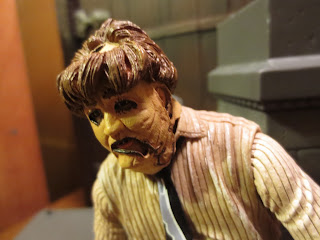 * Leatherface's second portrait features him wearing what is referred to as the "old lady" mask or the "grandmother" mask. The different masks are supposed to show Leatherface's different personalities and this is what he puts on when he wants to be helpful around the house. Again, I love the way NECA layered the rubbery masks over a traditional plastic head underneath. The head is on tight so just use a consistent upward pressure to remove it and swap. 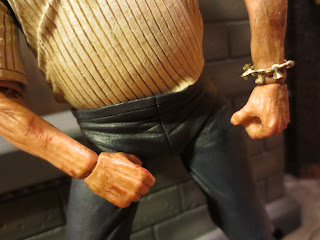 * Another thing that's kind of interesting is that Leatherface's shirt is really a soft plastic overlay that fits over his torso. The waist of his pants and the shirt are both kind of rubbery and you can actually tuck his shirt into his pants or leave a bit out if you want to give him a messier look.

Oh, and you can see that Leatherface's weird little bone bracelet is present on the figure as well. It slides around on his forearm and around his left wrist. 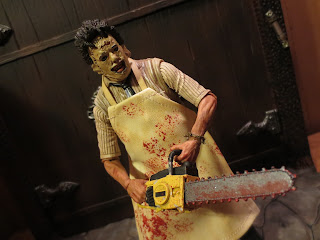 * While Leatherface isn't what I'd call superarticulated, he does have a nice blend of articulation and sculpt which allows him to take on the type of stances you'd want to display him in. He can hold the chainsaw in plenty of great two handed poses and wield the various tools he comes with in a variety of menacing ways. He really feels nice and sturdy, too. 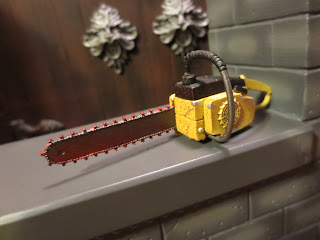 * What an excellent chainsaw! A number of action figures have come with chainsaws but this might be the best one ever. This is a near perfect recreation of the Poulon 306a chainsaw, the chainsaw that was used in the The Texas Chain Saw Massacre! There are forums where horror movie connoisseurs and chainsaw connoisseurs talk about these things and my research shows that this thing is highly accurate. It's definitely one of the coolest accessories I've seen all year! I love that it even has a gas cap on top. 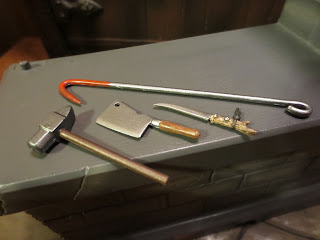 * When he needs more precision Leatherface switches to his smaller assortment of tools. He comes with a mallet, a meat cleaver, a curved knife with a bone handle, and a blood spattered meat hook. The paint work is great as these all look like they're actually made out of metal and wood. 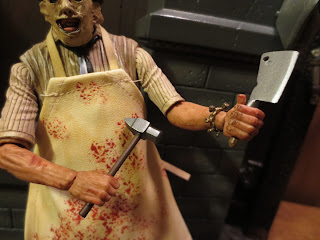 * While NECA often includes alternate hands with some of these Ultimate Edition figures, they didn't with Leatherface. They didn't need to, however, as Leatherface can truly hold all of his accessories. While his hands look fairly normal (although they're a bit grimy and covered with blood) they actually are perfectly sized to clip all of the tools and the chainsaw handles snugly in the palms. I'm really impressed by this as thin handled accessories are often a real pain to work into a figure's grip. 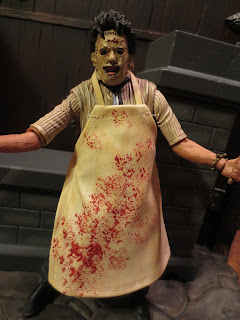 * Some people like cloth costumes on action figures and some don't. I typically am OK with them as long as it's something like a cape or cloak. Leatherface comes with a real pleathery feeling butcher's apron and guess what? It's really, really cool! It fits perfectly, drapes nicely over the front of his body, and even ties in the back. The blood splatter effect on the front is excellent and it just adds to the grody, grimy feel of the figure. 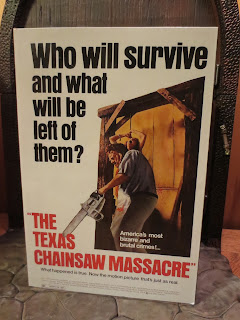 
* The only negative I have is that the figure doesn't come with a severed head, arm, and a bucket like the old McFarlane figure. That was a twisted but fun accessory. Otherwise, this is a really superb release and is definitely quite a value if you get this for the retail price. Heck, most e-tailers are selling Leatherface for around $23. 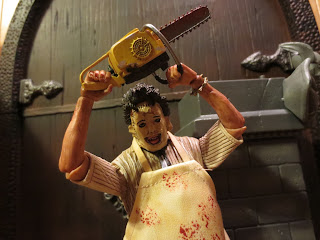 This figure easily gets an Epic rating from me. I'm not even that big of a fan of the film but I can't deny that Leatherface is a compelling and unique looking villain. He's just so creepy and disturbing! I'm really excited to add him to my horror collection and I'm sure plenty of other horror and TCM fans feel the same way. NECA is doing a bang up job with these Ultimate figures and I hope they continue to put them out. Here's to hoping that Michael Myers gets announced next year at New York Toy Fair!

In the past I've reviewed the McFarlane Toys Movie Maniacs Leatherface! While the NECA figure blows this one out of the water, I still love this one, too. It's just so grimy and wonderful!

I've also reviewed the 30th Anniversary Ultimate Freddy from NECA as well.
Posted by Barbecue17 at 11/04/2015