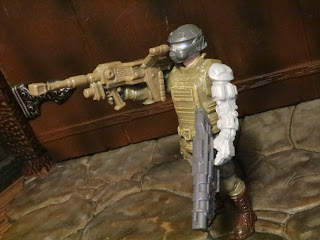 When is the last time that you saw accessory packs for 1/18th scaled figures available at retail? Someone on one of my Final Faction reviews commented that it seems like a concept we haven't seen since the Star Wars: Episode I accessory packs from 1999 and, to be honest, off the top of my head I can't think of anything more recent. These Final Faction accessory sets are pretty neat and while I didn't review the first series back when they came out at the end of 2020, I'm now trying to make up for some lost time. Today we're looking at the Heavy Arms set for Alpha Team 1, a set of five weapons to add some more firepower to the heroes. Ready for a look at this small arsenal of destruction? Than join me after the break... 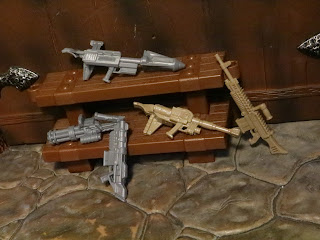 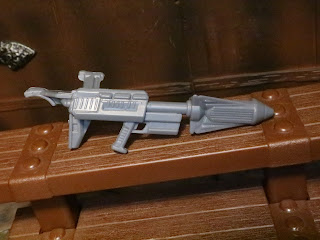 The Positives:
* First up is the Sky Flower, a heat seeking rocket launcher that apparently has the ability to projectiles that explode, releasing a different color of smoke based on what they hit. Interesting. Somehow they can tell the difference between metal, organics, wood, etc? Pretty cool. Final Faction is set in 2050 so it makes sense that their tech is more sophisticated than what we have now. This is a decent sized weapon with a stock that rests on the right shoulder and with a scope extending out to the left. 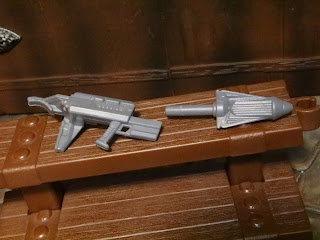 * Guess what? The missile for the Sky Flower actually is removable. It slides out so you can have it zoom towards the Kharn and have your figures reload the launcher. 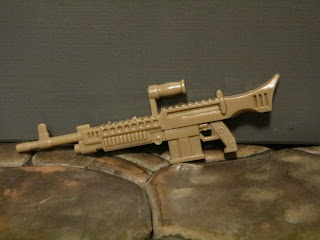 * Next up is the Rabid Wolf, an assault rifle that "fires a large number of small lasers at a high rate of speed." It looks like a pretty standard machine gun but apparently it fires lasers. Cool, cool. The sculpts are pretty nice and crisp on these and the weapons are very solid. Nothing overly brittle or gummy and rubbery here. 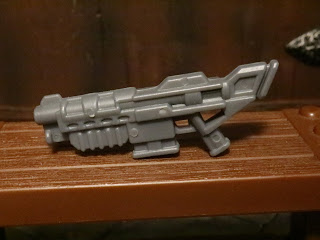 * I love the name of this weapon: The Angry Ape. While it looks like a pulse rifle or sophisticated machine gun (like something out of Aliens) it's supposedly a grenade launcher. A magazine fed grenade launcher is definitely quite useful against a powerful, armored alien army, I'd imagine. 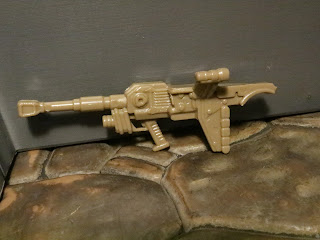 * My favorite might be the rather mundanely named "The Rail Gun." it's a powerful laser rifle that apparently is rather stealthy. It has a cool barrel shroud, an elaborate stock, a scope, and lots of little details and doodads on the weapon. This think looks like a pretty heavy duty piece of equipment. 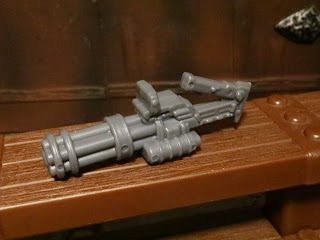 * Last up is the Tattooist, a laser firing gatling gun. Kind of reminds me of Ol' Painless from Predator or Roadblock's gun from the G.I.Joe: Spy Troops years. There's not a great way for the figures to hold this: Just in a neutral position from the rear handle. Still, it's a killer sculpt. 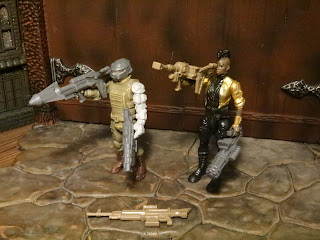 Getting five 1/18th scale weapons (including one with a removable missile) for around a buck is a great deal. Originally $1 when released in 2020, these are now $1.25. Still, it's an inexpensive way to arm your Final faction figures or other 1/18th scaled figures who need some firepower. They're rather nice sculpts in good, solid colors. The imaginative descriptions and names are kind of fun, too. If you've bought these to use with other toylines, which lines have you found them compatible with? Let us know in the comments below!
I've reviewed other Final Faction accessory kits and figures. For more reviews check out the following:
A.C.R.M.
Amari
Arrow ATV
Arrow ATV Weapons & Armor
Brute
Brute Striker
Churro & FD-0
Crawler
Decimator
Diabol
Drone
Drone Scourge
Huntra
Krepitus
P-131
P-131 Thunderbolt
Riptide
Ruck
The Rumbler
The Rumbler Weapons & Armor
Scope Long Range
Shift
Shock Arms
Spc. Scope
Steadfast
Torn
X4 Turret
Posted by Barbecue17 at 5/16/2022