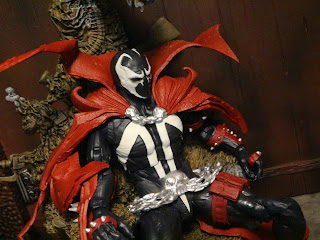 Want to hear something crazy? This is the first Al Simmons as Spawn figure available at mainstream retail in McFarlane's new Spawn line. The figures based on the vintage toys were Kickstarter exclusives, the other Spawns in the line (Gunslinger, Raven, Mandarin) aren't Al, and any other Al Simmons as Spawn figures are part of the Mortal Kombat 11 line. So, yeah, if you've been wanting an Al Simmons as Spawn from this line, this is your first opportunity. This is also a very classic comic inspired version of Spawn sitting on his throne made of trash and bones. It's a very iconic image from the comics and it makes for a very cool boxed set. When I first saw this revealed a few months ago I was incredibly impressed by it. It looked perfect: A classic Spawn with his throne. What could be better? As I looked closer and saw more images, though, I was unsure about this release, though. You're getting half a cape and parts of the cape seemed to be attached to the throne. It seemed like the figure was designed to basically be in one pose, kind of like an articulated statue. Over the last couple weeks, though, I saw some images showing the half cape was removable so, at the last, this was a great chance to get a capeless, classic Spawn and he'd look great on the throne. Having him in hand he's actually even better than I expected. Not 100% perfect by any means but still very, very satisfying. This is a great set and well worth checking out for fans of Spawn. Let's take a look at this guy after the break... 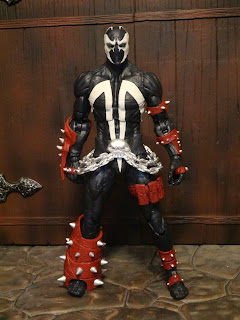 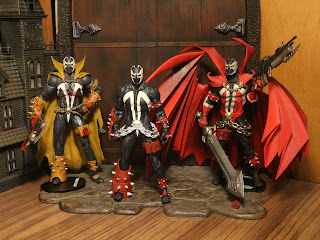 The Comparison:
* The Mortal Kombat 11 Spawn (Bloody) is on the left, the Kickstarter Spawn is on the right, and this new Spawn is in the middle. He's about the same size as the others. Maybe a hair shorter, but he is a completely unique sculpt so far as I can tell. He maybe shares a right foot with the Kickstarter Spawn, but I might be mistaken there. 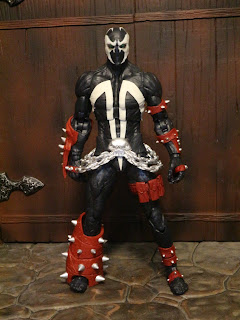 * Spawn looks awesome in his classic outfit: A black suit with the white chest design, silver belt chains, and lots of red spiky accessories. While there's some nice, subtle muscle definition everywhere on the figure, there's still a smoothness that gives Spawn more of a superhero feel. This version of the necroplasm suit doesn't look as organic as some others. The paintwork is clean and neat and the figure just looks impressive. 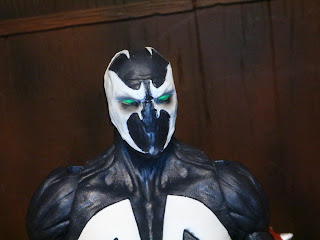 * This is a great Spawn headsculpt. Very classic. The details on the face are raised with some texture to hint at Al Simmons' features underneath but most everything on the back is smooth. The green eyes look great, particularly with the shadows painted subtly underneath. 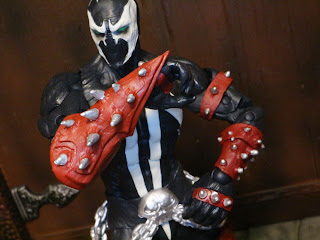 * Spawn's sporting some lethal looking arm wear. While his left arm is more subtle (and I use subtle loosely), his right arm is sporting a massive spiked gauntlet. The back of the box shows off a great Greg Capullo and Todd McFarlane image of Spawn chilling in his throne and you can see the massive spiked gauntlets prominently there. They look fantastic here and are much pointier than you'd find on something from most other toylines. 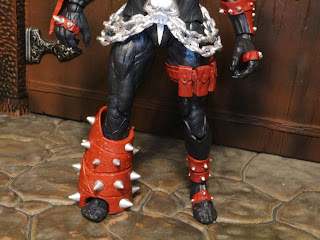 * "Spawn! Your boots don't match! You're not walking out of the house looking like that, mister!"

The Spawn toyline is known for asymmetrical footwear and that's what we've got here. Look at that massive boot. It's really cool looking but, honestly, what do you do with a boot that large? It's gotta be so unwieldy to get around with that thing. Imagine all the stuff you'd bump it into. Now if you're bumping it into the faces of some really bad guys, well that... that's just swell. 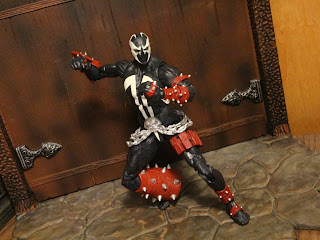 * The articulation is similar to the articulation on most other recent Spawn figures or the Spawn figures from the Mortal Kombat line. Smooth joints, a nice articulation scheme, and great plastic quality. Plus, with the cape being removable here, you can really mess around with this guy. Spawn has appeared plenty of times without his cape so this is a look I don't mind having 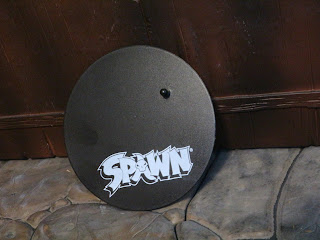 * If you want some extra assistance when posing Spawn he does come with a standard disc stand. 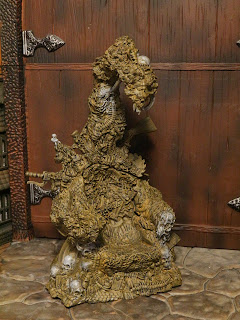 * Spawn's throne is a big piece of trash. No, seriously: It really is made of trash. I love how Al becomes friends with and a defender of the homeless in Rat City and this throne was built by the guys who view Spawn as their protector and king. Of course, Spawn adds onto it with bones and stuff over time. It's a decent sized piece at 9 inches and it's made from five separate pieces (though you only have to snap one of them on out of the box; the rest is pre-assembled). The detail is fantastic on this and is covered with loads of weird junk. It's really fun to look around and see what you find. Most of the junk kind of mixes together (which is true to the comic look) but the bones and skulls do get grayish paint hits to show them off. 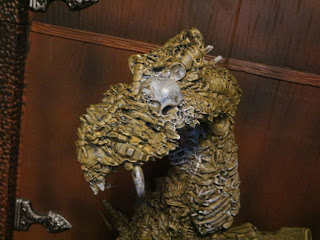 * Here's the top of the throne. I love how imposing it looks! There are bones hanging down that make it look like teeth. It's almost like it's a living thing. 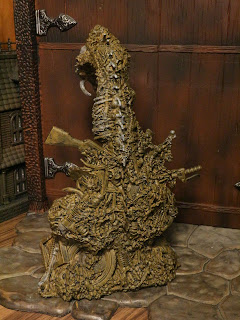 * Here's a look at the back. More weird stuff visible here: A shotgun, a bike handle, rib bones and vertebrae, grenades, centipedes, tires, a crate, pouches, and plenty of other trash and garbage. 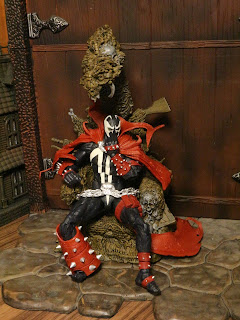 * How does Spawn look in the throne? Awesome. Seriously, he's darn cool looking and fits perfectly in the throne. Remember, he does kind of just lay back in it, not sit upright and regal. It's a throne made of trash for crying out loud.

So, you might notice that Spawn does look like he's sitting in this throne while wearing his full cape. How does that work? It's fairly clever and worked out far better than I thought it would initially. The collar and mantle of Spawn's cape is really kind of a half cape that fits over his head and plugs into his back to give the illusion that he is wearing a full cape. The other piece at the bottom is separately attached to the throne. 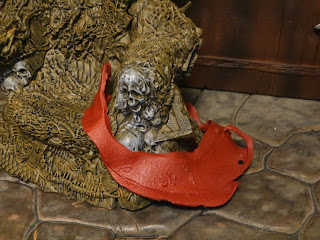 * Here's the separate piece of cape at the bottom that makes it look like Spawn's cape is hanging out from underneath him when he's sitting on the throne. It's actually a removable piece so if you don't want to have it on (if you are, for instance, displaying him standing near the throne or using the throne for some other purpose) you can just take it off. 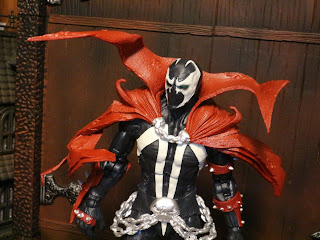 * And here is the "half" cape that Spawn is wearing. It looks fantastic but it is clearly designed to be worn when he's sitting on the throne.

* If you were hoping for a Spawn figure to display his with cape not sitting on the throne, this isn't it. He looks great without the cape if you want a cleaner, more basic Spawn, but the half cape is very limited in use. It would have been nice to have had a rubber cape that could split apart with a removable lower half so this set could truly have delivered a nice, basic Spawn to retail. 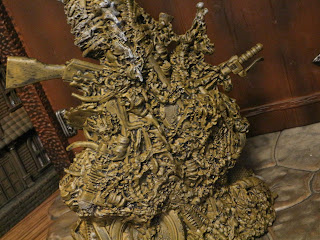 * I love the details but it would have been nice to get a few more paint hits here. Just some simple hits on a few of the more prominent pieces like the tire, grenades, and shotgun would have been welcome. 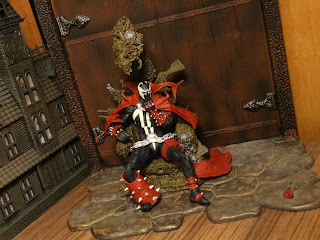 This is a really impressive piece. It looks fantastic on display and there are some cool poses you can achieve with Spawn chilling in his throne. My only real complaints are that it would have been nice to have a few more paint applications on the throne and it would have been ideal to have Spawn come with a full cape, even if it was an extension piece for he half cape, so this could function as a standard Spawn. I'm sure McFarlane Toys will release a standard Spawn again at some point in the future (probably multiple versions) but this set would have benefited from having the ability to also be a normal caped Spawn. Still a Great and a 1/2 set, though. This is one of my favorite pieces in this line to date.
Looking for more of Spawn/ Al Simmons? I've also reviewed the movie based Al Simmons, Burnt Spawn, and standard Spawn, the Mortal Kombat 11 Malefik Spawn (Bloody Disciple) and Spawn (Bloody), and the 2022 Mandarin Spawn Deluxe who isn't Al Simmons, but he's still Spawn.
For more Spawn reviews check out the following:
The Clown
Cy-Gor
The Dark Redeemer
Mandarin Spawn Deluxe
She-Spawn
Soul Crusher
The Violator (Bloody)