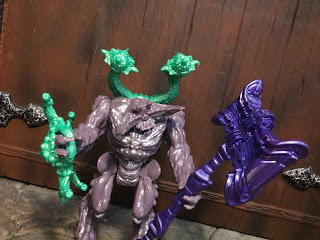 Today I'm checking out the second of six new accessory sets from the Dollar Tree exclusive Final Faction line and this time I'm looking at the Brute Striker set, a weapons pack loaded with goodies for the Brute. The Brute was first released in 2020 but he's still readily available so you shouldn't have trouble finding him. I reviewed the Brute yesterday in preparation for this review (I didn't review the first series of figures when they first came out at the end of 2020) so check out that review for the scoop on that figure. The Brute Striker set comes with a massive warhammer like weapon, a shield, and a backpack that can fit on the Brute or most other standardly shaped Kharn figures, particularly the bigger guys like Diabol or Krepitus. It's a neat set with fantastic colors; I love purple and green! Let's take a look at the Brute Striker set after the break... 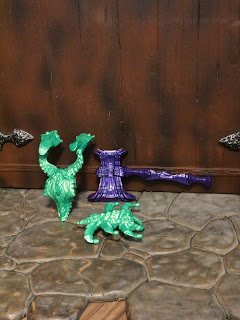 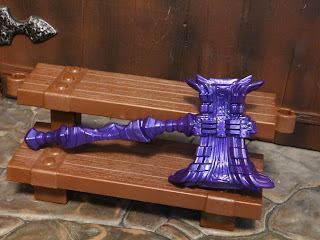 The Positives:
* First up we'll take a look at the glaven. This gigantic battle hammer definitely looks capable of causing some mayhem in the hands of a Brute. The detail is incredible on both the head and shaft of the weapon and the metallic purple color is pretty darn cool and helps the glaven to stand out nicely. This thing weighs as much as some of the other figures in the line it seems. 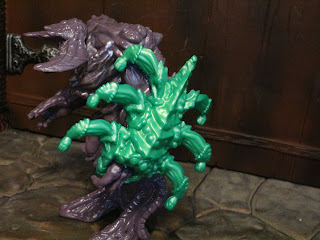 * Next up is the strather, a combination shield/ battering ram. It fits on either arm of the Brute fairly well (there's a handle) and it looks menacing. It looks like some sort of insect. Is this thing a manufactured piece or is it made from the body of some creature from the Kharn home world? I love the way the Kharn weapons and technology seems to look both technological and organic. It's a great aesthetic. 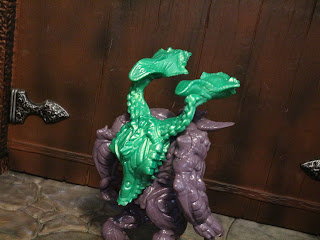 * The third weapon is called drathos and the way the package describes it, I'm not sure if it's some kind of creature or not. "Drathos attacks with its dual heads, cutting any surface with its razor sharp, jagged teeth."
Huh. It's definitely functions like a backpack and fits on the Brute or most other Kharn members, and the blend of an excellent sculpt and a metallic green color makes this a rather cool looking tool that stands out. 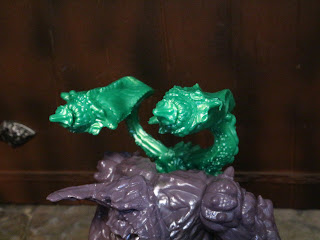 * The dual heads of the weapon look like some sort of sea creature to me. So they cut surfaces, huh? Doesn't the Brute have to be pretty close to do that. I guess that wouldn't be too big of a stretch since the Brutes are heavily armored. Shortly after I opened the package on this one, however, I noticed that the tips of the.... well, whatever they are, seemed like separate pieces. 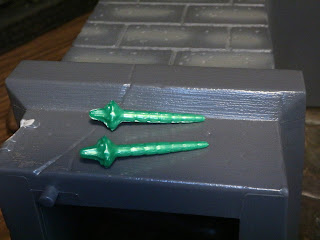 * It turns out they're removable! They're detailed down the shaft so I'm presuming these are some sort of projectiles that the drathos can fire. Imagine something launched that rotates with razor sharp teeth. When it hits its target it continues to spin, basically eating its way through armor, walls, or even enemy combatants. #brutal. 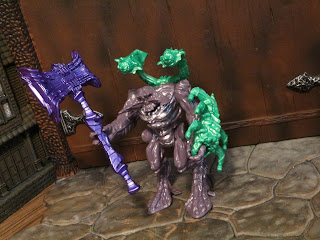 This is a Great set that really adds a lot of coolness to the Brute or any other larger Kharn villains who need some more weaponry. The glaven is pretty darn sweet, the strather has a great sculpt and design, and the drathos is incredibly cool with those removable missiles. I'm loving the design and just the fun of this line and the accessory sets are really making it one of my favorites out there right now. Plus, you can't beat the price of these at $1.25. I've got more reviews from Final Faction so stay tune and let me know if you're a fan of this line, too. It's a gem for sure.
As mentioned above, I've also reviewed the Brute figure. For more reviews from Final faction check out the following:
A.C.R.M.
Amari
Arrow ATV
Arrow ATV Weapons & Armor
Brute
Churro & FD-0
Crawler
Decimator
Diabol
Drone
Drone Scourge
Huntra
Krepitus
P-131
Riptide
Ruck
Shift
Spc. Scope
Steadfast
Torn
X4 Turret
Posted by Barbecue17 at 5/06/2022