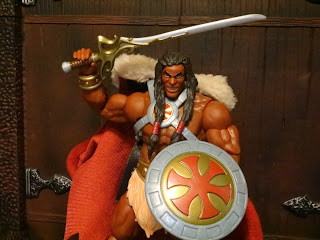 I still haven't received my preorder of the next series of Masterverse figures (Teela, Mer-Man, and New Eternia He-Man and Skeletor) but I was surprised to receive my preorder of the Masters of the Universe: Revelation King Grayskull from Target last week. Originally King Grayskull wasn't scheduled for release until August but it appears Mattel got him in stores a bit early. King Grayskull wasn't introduced into Masters of the Universe until the 2002 Mike Young Productions animated series and he wasn't a major character in the show. Up until Revelation, his biggest claim to fame might be that he was pretty important in the development of Masters of the Universe Classics (AKA, the greatest toyline of them all). Apparently the original idea for a MOTU toyline on MattyCollector was conceived of by Scott Neitlich as a continuation of the 200x series with the first figure planned being King Grayskull using the Ice Armor He-Man figure's body as the base. When the Four Horsemen showed off their "Classics" styled He-Man, however, the game changed, though King Grayskull was the initial figured offered up as a 2008 SDCC exclusive. He showed up in the bios for MOTUC but Revelation was the character's biggest role yet. And yes, he's been reimagined in Masterverse as a black man. It definitely makes for a more interesting figure than just having He-Man in slightly different armor. Voiced by Dennis Haysbert, King Grayskull leads a pantheon of Eternian heroes in Preternia in MOTU. Let's take a look at King Grayskull after the break... 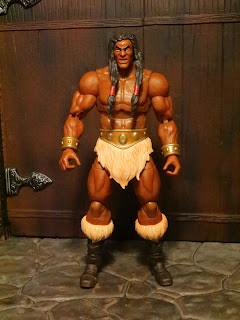 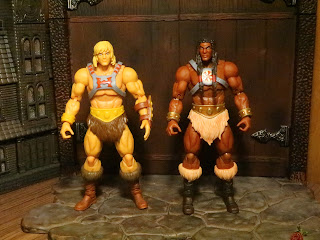 Comparison:
* The standard Motu Revelation He-Man is on the left while King Grayskull is on the right. What's different? The headsculpts, of course, and the harnesses. After that, it's actually just the paint. These two guys use the same bodies. Well, King Grayskull's left forearm is different as he has matching gold cuffs rather than a removable bracer like He-Man has. 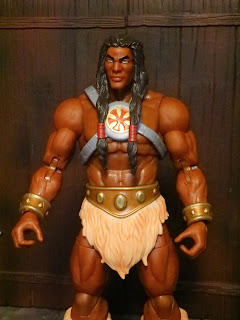 The Positives:
* King Grayskull's outfit definitely shows the influence of He-Man's classic outfit (though, in universe, Grayskull influences He-Man!) as they're wearing very similar outfits. King Grayskull has a more beige loincloth and his wrist cuffs and belt are a goldish copper with a really nice paint job to add some more detail and weathering to them. His harness uses the asterisk styled logo of the 200x He-Man and King Grayskull, so that's pretty neat. It's a removable piece so you could always mix things up or use it to create a 200x Masterverse He-Man. 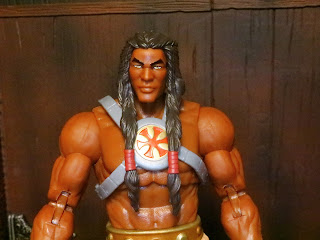 * King D'Vann Grayskull comes with two interchangeable portraits, the first of which is a standard, fairly neutral portrait. His hair is similar in style to the 200x King Grayskull with two braids hanging down the front though the hair is designed differently. The back has a longer braid and cool metal decorative piece woven into the hair. 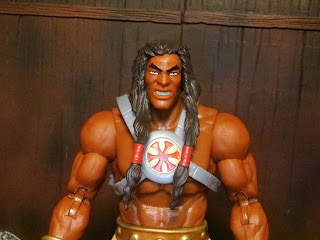 * King Grayskull's second portrait is more battle ready. Teeth bared, braids hanging slightly askew; this version of Grayskull is ready to stomp on some Snake Men for sure. 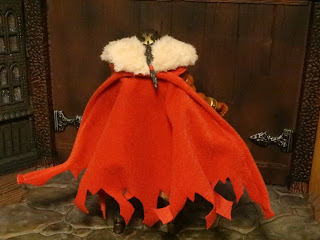 * King Grayskull comes with a really nice cape. it's made from fabric with a wire for posing running down the sides and has big, furry shoulder pads. it also attaches to the figure via two Velcro straps that hook onto Grayskull's harness. it's a nice looking piece that definitely helps the king stand out from the other Masterverse figures released so far. 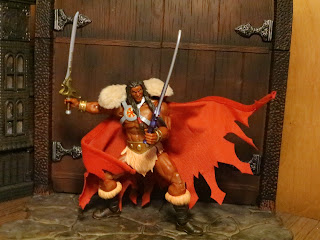 * The Masterverse line has really solid articulation and King Grayskull is no exception. If you've handled almost any of the figures in the line then you probably know what to expect. He's durable, fun to pose, and looks great in battle, particularly with the dynamic cape he's sporting. 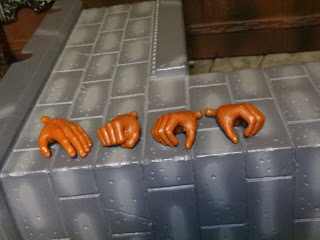 * King Grayskull also comes with the same four hand sculpts as He-Man: An open right palm, a left fist, and two standard grips. They swap in and out easily and seem quite sturdy. 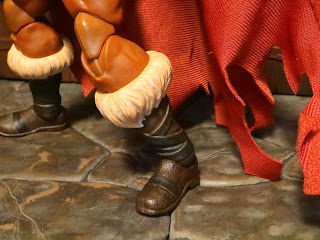 * King Grayskull's boots are really nice: The furry cuff has another shade on it, almost an orangish, that makes it look more like real fur, while the straps around his boots are two different colors. It's a good design that's really enhanced through paint applications. 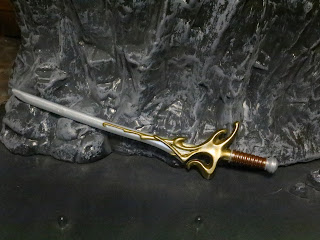 * King Grayskull comes with both halves of the Power Sword, though they don't connect together. The heroic half has a straight blade with an elaborate gold hilt. It's an interesting take on the Power Sword and the early concept of the sword being divided into two halves. 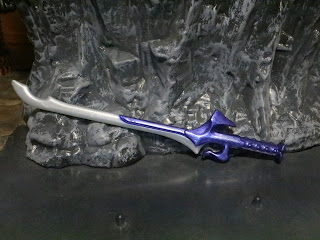 * He also comes with the dark half of the Power Sword. This blade has a slightly more curved blade and a more angular, sharper looking metallic purple hilt. 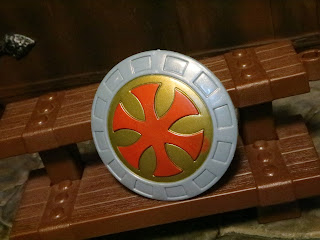 * I really like his shield. It's built the same as the Masterverse He-Man's shield with functional straps on the back so it's very easy for King Grayskull to use the shield, particularly when using the flat palmed right hand piece. The design in the center is really nice as well, matching the 200x inspired design on Grayskull's harness. 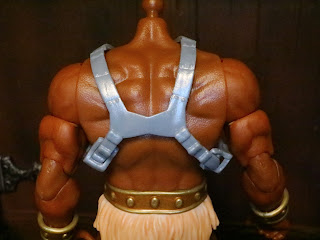 The Negatives:
* Sadly, I've got some negatives for King Grayskull. First up are the straps on his harness. They're either too short or not designed well as they keep popping out. It's really tough to keep this on him at all, particularly when you use the cape with it. 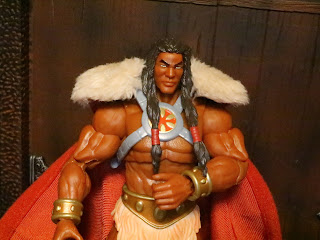 * Next up are the furry shoulder pads. I just cannot get them to look right. They seem like they just don't fit in the right place on his shoulders. Anyone else having better luck with these than I am? 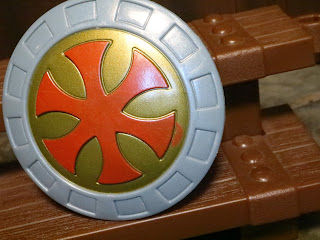 * I love King Grayskull's shield but mine has a big paint error running out from the symbol in the middle of the shield. That's unfortunate. 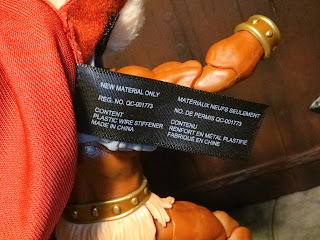 * Like the Mattel Creations exclusive Scare Glow, King Grayskull's fabric cape has a massive tag on it. Huge. The clothing I'm actually wearing right now doesn't have tags this large, so why the heck does an action figure need this? 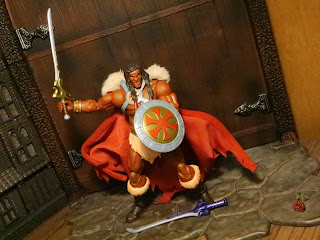 I really was looking forward to King Grayskull. I love the design of the figure and the extra head, soft goods cape, and accessories definitely made him seem worthy of the price tag. Unfortunately, the fact that getting his harness and cape on him is such a pain really makes this guy frustrating. King Grayskull deserves better than this! He's still a Good and a 1/2 figure but he's definitely suffering from some design flaws. Is everyone else having trouble with his harness and getting the cape right? He looks great if you get things in place but they seem to just tumble apart shortly afterwards.

For more Masterverse reviews check out the following: