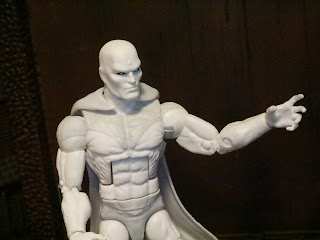 Interestingly, GameStop and some other retailers have been jumping back and forth on their Marvel Legends Series prices with some of the newer Retro Collection figures being sold for $22.99 and some for $24.99. I was interested in the all white version of Vision, particularly due to the character's appearance in the WandaVision TV series last year (though the TV version did get a figure as well) and when I stumbled upon him a week or so ago for lower $22.99 price I decided to snag him. The all white version of the Vision appeared in 1985 in West Coast Avengers #4 as a deprogrammed version of the Vision. Fearful of his power and access to the records and databases his role as an Avenger would give him, a group called Vigilance had him disassembled and wiped clean, leaving him devoid of his personality and memories. This is a very simple figure but I definitely give Hasbro kudos for getting a comic version of this incarnation of the Vision out so soon after his MCU appearance. Often it seems like it takes a long time to see comic based versions of characters from the films and TV shows. Let's take a look at the Vision after the break... 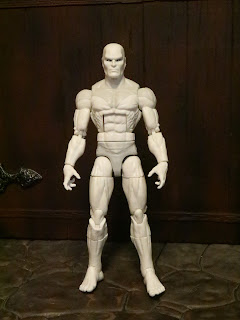 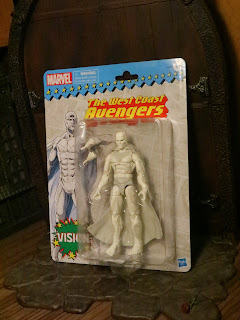 The Packaging:
* Here's a quick shot of the cool Toy Biz styled packaging. I collected some of the figures on this packaging when they were originally out and while the Vision wasn't released like this, it's still pretty fun to see the packaging and imagine what might have been. 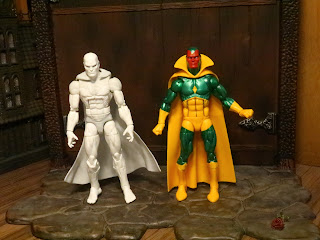 Comparison:
* On the left is the new white version of the Vision while the original Retro Collection Vision is on the right. It turns out that these are two rather different figures built on different bodies. The heads might be the same, but that's about it as far as I can tell. 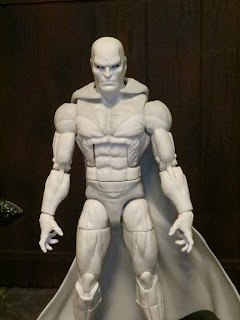 The Positives:
* The Vision looks pretty plain in all white but that's how he looked in the comics, so it makes sense. It's also how he looked in the 1991 Captain America and the Avengers video game which I recall playing at the arcade as a kid. Man, that one ate quarters for sure, didn't it? To keep him from just being a solid white figure Hasbro did give him some grey details on his trunks and upper chest. John Walker/ US Agent gave Vision crap out having no standards for walking around without clothes on so maybe this was Hasbro's attempt to appease him? he also has bare feet, another feature of the character's in his first appearance. 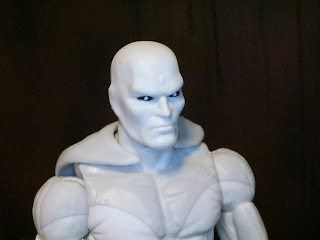 * The head looks good. I think it's the same as the classic Retro Collection Vision. It looks sterner in white, though. Kind of like one of the guys from Prometheus. 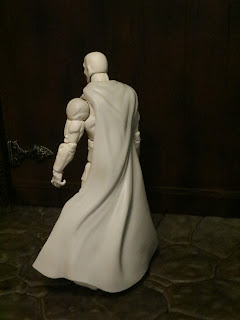 * Vision comes with a cape. It's a sleeker, slimmer cape than the classic version coms with and it simply attaches to his back via a peg. Easy on, easy off. Looks good, though, and doesn't interfere with his articulation too much, either. 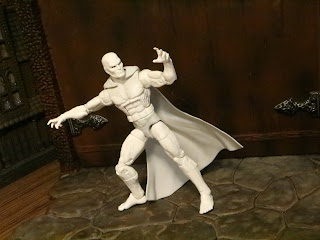 * Vision uses a fairly standard styled body but it's still pretty decent articulation wise. It's a bit dated compared to some of the newer releases but there's nothing wrong with the body itself. The joints are rubbery, though (I'm getting to that in a minute). Otherwise, he moves exactly like you'd expect. 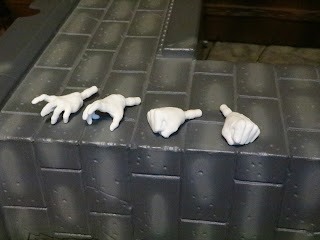 * Hasbro included two sets of hands with Vision: Two gesturing hands with the fingers splayed open and two fists. They swap easily enough and at least give you a couple opportunities to get some variation in your posing. 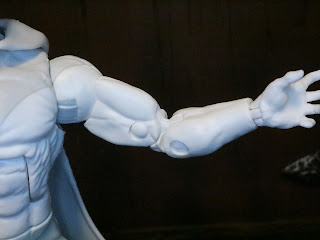 The Negatives:
* The elbows and knees are double jointed but, unfortunately, they have rubbery plastic at the elbow and knee joint. I haven't see that plastic used in awhile so I was disappointed to see it show up here. It just feels off to me and seems like it makes things feel wiggly. 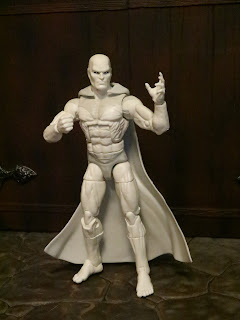 The Vision looks OK and does fill a nice role on the shelf but he's not particularly exciting or anything. I mean, this is the white variant of the Vision, so I expected him to be all white, but surely Hasbro could have figured something else out to make him a little more exciting. Maybe some energy effects for his hands or something or perhaps an alternate portrait? Maybe even some blue on the inside of his cape like many of the comic depictions? He's a Good figure, a solid average Marvel Legends figure, but definitely one that's sold on the popularity of the character and not because it's a particularly exciting toy. I wonder if this will end up being a massive pegwarmer or if people will snap this up and he'll end up skyrocketing in price? What are your thoughts on this version of the Vision? Worth it or not. Also, how do you feel about the upcoming "plastic free" packaging for the Marvel Legends figures? Comment below and let me know.
This is actually the first figure of the Vision I've reviewed on the site. For more Marvel Legends: Retro Collection reviews check out the following:
Marvel Legends Retro Collection by Hasbro
Loki
Scarlet Witch
Marvel Legends Retro Collection: Fantastic Four by Hasbro
Psycho-Man
Marvel Legends Retro Collection: Spider-Man by Hasbro
Hobgoblin
Shocker
Symbiote Spider-Man
Posted by Barbecue17 at 5/20/2022