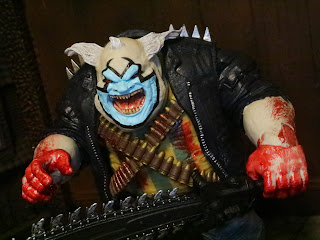 Ready for another visit from the Clown? Last week GameStop did a McFarlane day where there were some special toys and preorders available from Mcfarlane Toys. While the Gunslinger Spawn with Horse set is a preorder (though it's supposed to ship this month), the bloody version of the Clown was available in stores on Saturday. In fact, I actually saw him in one of my local GameStop's the week before. I really liked the look of the figure and his sweet chainsaw accessory but overall he's very much a retread of the previous release, complete with an oversized weapons pack. I kept telling myself I was going to hold off on this one but when I learned that the Clown's backpack has two completely different weapons, I caved. I also had my monthly GameStop $5 coupon, too, so that helped. I'm loving the new Spawn line and while I'm not picking up everything, I'm finding I like stuff more often than not. Let's take a look at the bloody version of the clown after the break... 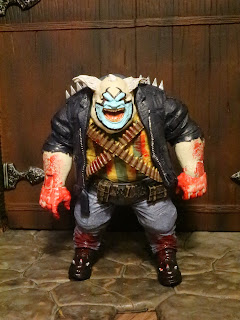 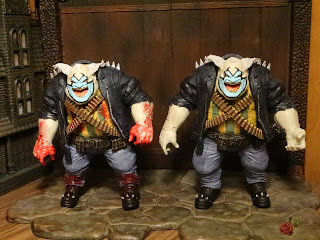 Comparison:
* The bloody version of the Clown is on the left while the standard version of the Clown from last year is on the right. What's different? Figure-wise it's really just the presence of the bloody paintjob. the accessories are different, though. The gun rigs have different firearms and rather than a knife and a straight razor, the bloody variant comes with a chainsaw sword. Since the figure is the same, a lot of my review is going to be pretty similar to last year's. 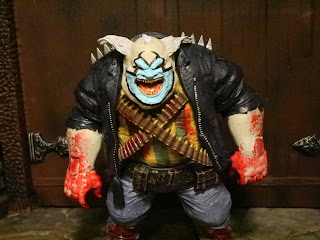 The Positives:
* The Clown is a short, rotund guy who kind of reminds me of Frank Reynolds if he really let himself go. He's wearing his recognizable green and yellow striped shirt (now blood stained), a tattered punk rock styled leather jacket, and a few belts of ammunition in case he needs to reload. Or maybe he just likes the look? The Clown's weird, pale skin really stands in sharp contrast to the bloody covering his hands and arms. 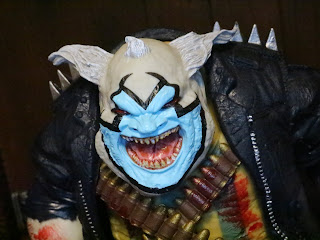 * I do kind of wish we'd gotten a new headsculpt but this one is still is excellent and it's full of personality. It's not the kind of personality you'd really like to interact with or even be around, but it's personality none the less. The face paint looks fantastic and menacing and his teeth are hideous. The paint is really good on his mouth and teeth as it actually looks "wet" inside there. Gross! 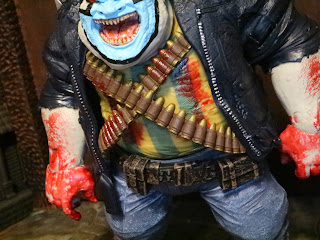 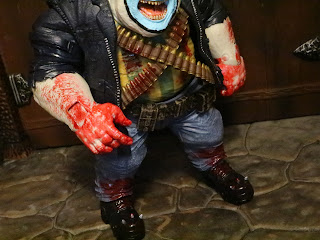 * The blood effect on this guy is impressive. McFarlane Toys has done a few bloody variants lately and they've been really good. There's just something about some of these Spawn characters that bloody variants work oh so well for. 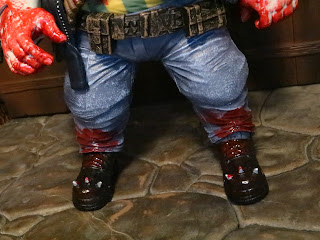 * The Clown's sporting some seriously detailed jeans but here they're covered with blood. It's tough to see here but the pattern on the denim of his jeans is just eerily realistic. It really does look like worn denim! That's a heck of a paint application for something that seems like a very mundane part of the figure. Plus, killer boots, man. 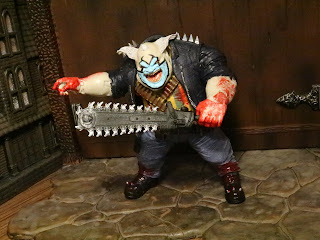 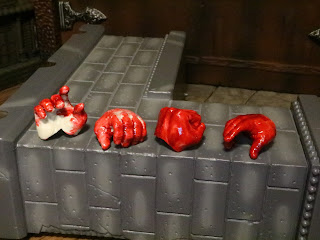 * The Clown comes with four interchangeable hands that are now slathered in blood: Two right hands in different grips, a left hand fist, and a standard left hand grip. The hands pop off easily and the pegs are incredible sturdy. Consideringing the size of the Clown's meaty paws, is that any surprise, though? 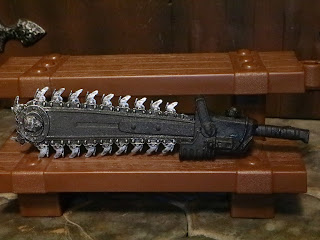 * This version of the Clown's new accessory is a chainsaw. It looks less like a standard chainsaw and more like a weird chainsaw sword. It's pretty cool and definitely helped sell me on this figure. The teeth on the chain are really nasty looking. I wonder why McFarlane didn't put any blood on this piece? I guess it's more versatile without it, though, right? 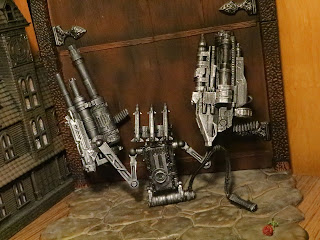 * The Clown's main accessory is... well, it's larger than him. It's a massive backpack with two humongous guns (which are different than the guns from the standard release) and a missile launcher on top. This thing is crazy and has a ton of articulation on its own: Swivel control stick base, swivel/hinge missile launcher, and two arms with swivel hinge shoulders pivots, hinged elbows, and swivel/hinge gun turrets. I guess when the Clown doesn't want to go hand to hand as the Violator he whips these out instead. 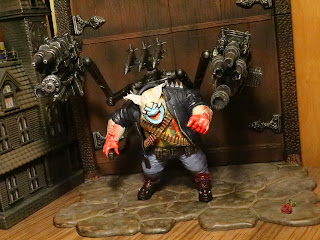 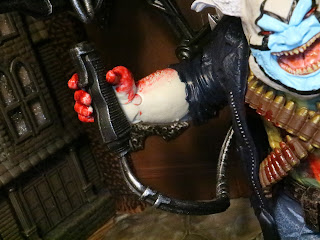 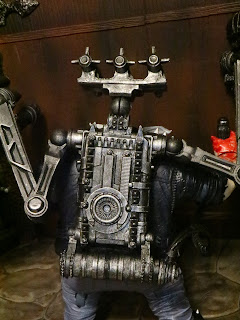 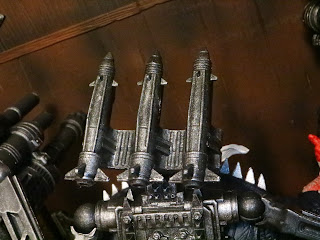 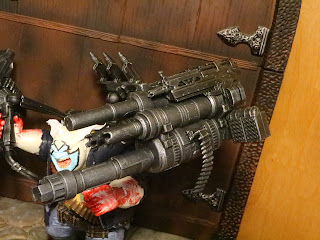 * The weapons on the gun rig for the bloody Clown are different from those on the standard release. The left gun is a massive monstrosity that looks like it's composed of multiple weapons melded into one massive machine of death dealing. There's a massive cannon with an ammo belt and a box of projectiles of some sort, two smaller round cannons, one longer barreled cannon, and two smaller machine guns. The sculpt is awesome and the paint effect gives off a realistic gunmetal appearance. 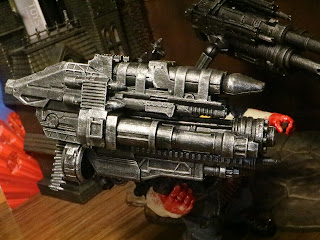 * The right gun set has another ammo belt, a drum magazine, rockets, a gatling gun barrel, at least five other gun barrels, and what looks like a bayonet on a tube of some sort. Wild! 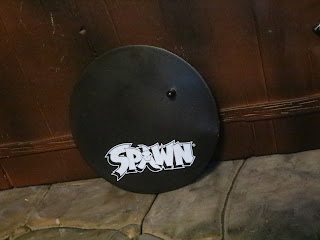 * McFarlane Toys continues to include a simple disc stand with each release. I like these and wish every company included a stand with their action figures. 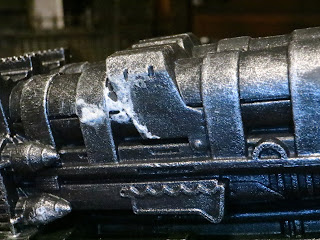 The Negatives:
* The right cannon has some sort of weird glue on the outside. I'm guessing it's for keeping a few of the gun parts together but it's definitely off-putting. 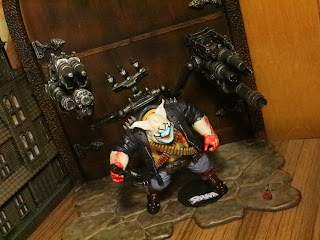 * Like on the original release the giant gun rig is awesome but the amount of articulation and the weight of the guns themselves does give me some hesitation about the long term stability of the piece. The plastic quality is good but I still get the feeling that overtime things might warp. So far my original is good, though, and that's been about 6 months or so. As cool as this piece it still feels very cumbersome and some of the articulation doesn't quite feel like it adds anything to the display of the piece. I would have preferred fewer joints and more stability. 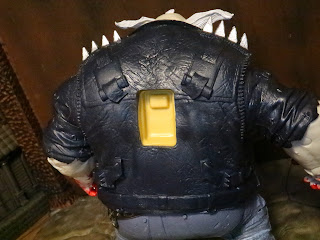 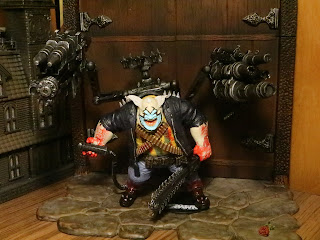 I actually like this version of the Clown a bit better than the standard release. It's overall the same figure, yeah, but the guns are a bit cooler here, I'm loving the chainsaw weapon, and the bloody paint effects are awesome. I really do kind of wish that maybe McFarlane had just went with the standard figure and maybe a new jacket piece rather than including the backpack again but they definitely did try to include some nice variations here rather than just making this a simple repaint. He gets a Great and a 1/2 from me. The design and paintwork is excellent and makes for an even creepier version of the Clown!
Looking for more of the Clown/ Violator? Then check out my review of the 1994 series 1 The Clown and the modern The Clown and The Violator (Bloody).
For more Spawn reviews check out the following:
The Clown
Cy-Gor
The Dark Redeemer
Mandarin Spawn Deluxe
She-Spawn
Soul Crusher
Spawn (Deluxe Set)
The Violator (Bloody)