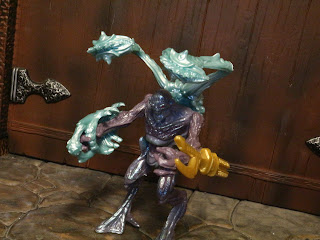 I was on vacation a couple of weeks ago and while out of town I managed to find all of the new Final Faction accessory packs. Are you ready for some more dollar store goodness? Then let's jump in with one of the Kharn set: The Drone Scourge. The Drone isn't included in this set (I reviewed him a few weeks ago, though) but these accessories are designed to work with him and I've got him in most of the pictures to show this gear off. It's pretty cool to get actual accessory packs available for a retail toyline as while many online collector lines release accessory packs, it's not common to see them on store shelves for mass market retail lines. The Drones are the basic grunts of the Kharn and this set gives you the opportunity to beef up some of your Drones with three different weapons. Let's take a look at the Drone Scourge after the break and see if it's worth adding to your collection... 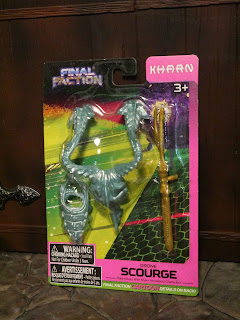 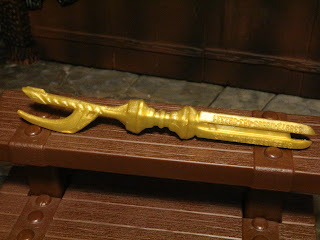 The Positives:
* First up is the scythen, a gold, bladed weapon that supposedly "bridges the distance between enemies in a most painful fashion." The middle of the shaft seems to be the handle, so perhaps it's a dual sided weapon with a double-bladed sword on one end and... something else on the other. I'm honestly wondering if the straight shaft on the left side is a short range blaster of sorts with a blade affixed underneath. 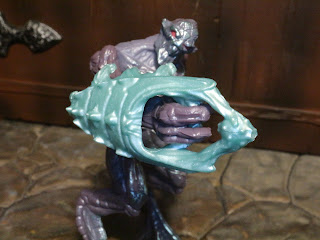 * Next up is the luminar, "an energy weapon of extreme power." The luminar is a ranged weapon, according to the packaging, and it fits over the forearm of the Drone. It stays on fairly well and has some sort of energy launching device at the front. It also seems like it serves as something of a shield as the weapon seems to be made from the shell of some sort of insect or sea creature. 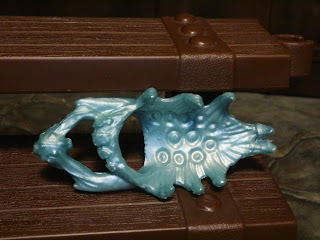 * The inside of the luminar has lots of little details sculpted in which definitely makes this seem like some sort of bizarre amalgamation of an organic creature and Kharn technology. 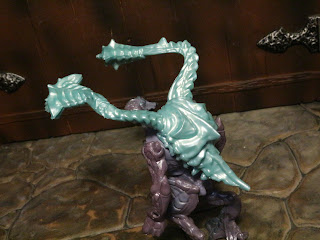 * Last up is the druksyl, a backpack mounted weapon that's supposedly inspired by a serpent from the Kharn homeworld. The backpack also looks organic and simply plugs into the back of the Drone (other Kharn figures with more humanoid shapes can wear it, too). 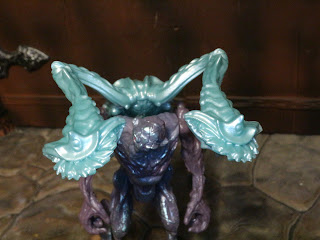 * The dual weapons on top are supposed to fire venomous acid rounds that dissolve their target. The launchers do look like the heads of some freaky space snake with a mouth full of sharp barbs. Wicked. 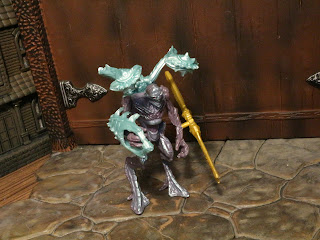 The Drone Scourge set definitely has some fun accessories for your Drones or some of the other Kharn. It's fairly versatile and the weapons are overall pretty creepy and creative. This one gets a Good and a 1/2 from me. If you're a fan of the line and actually messing around with the figures or even army building this isn't a bad set at all. I like the druskyl; those serpent heads firing venomous acid barbs just seem really outrageously cool. If you've got multiple Drones, this set could always outfit three of them with unique weapons rather than just giving you one overpowered Drone. Or build an army of OP'd Drones. You do you.
I've also reviewed the standard Drone figure in this line.
For more Final Faction reviews check out the following:
A.C.R.M.
Amari
Arrow ATV
Arrow ATV Weapons & Armor
Churro & FD-0
Crawler
Decimator
Diabol
Drone
Huntra
Krepitus
P-131
Riptide
Ruck
Shift
Spc. Scope
Steadfast
Torn
X4 Turret
Posted by Barbecue17 at 5/05/2022