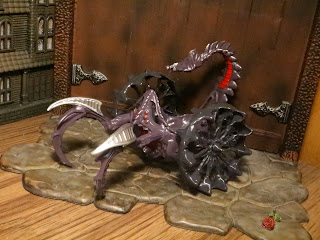 Since I reviewed the Kharn vehicle The Rumbler earlier this week it's now time to check out the weapons and armor kit for it. What's the idea? Simple: Buy the basic vehicle for $1.25 and then buy the weapons and armor kit for $1.25 to complete it/ armor it up. It's a novel concept and while it might come across as a money grab in a more expensive toyline, considering the price of these toys it really just seems like a creative way to get these on shelves at Dollar Tree for the now largely standard $1.25 price point. Let's take a look at the Rumbler Weapons and Armor kit after the break... 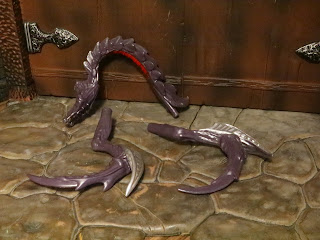 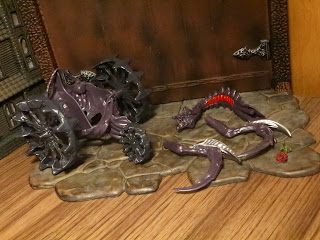 * Like the Arrow ATV Weapons & Armor kit, the Rumbler Weapons & Armor kit comes in a small cardboard box with instructions on where to place the armaments. There are only three pieces in this set but they're fairly large, feature paint applications, and definitely alter the overall look of the vehicle. 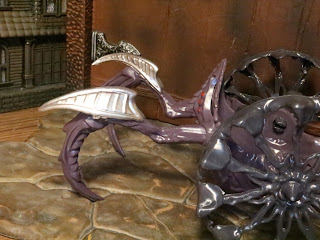 The Positives:
* The first pieces are the armored Thrasher claws which fit on the front of the vehicle. They're too techno-organic looking insect-like claws with bladed weapons on the front. They make the Rumbler much larger and quite a bit more fearsome looking. They're solid pieces and I love how they look. 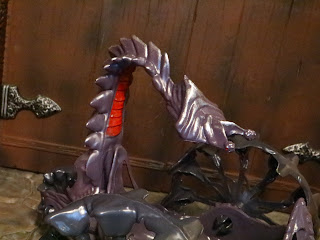 * The final piece is the "Armored Scorpion Whip." It's a scorpion like tail that simply plugs into the back of the vehicle. It also makes the Rumbler look more impressive though I'm not sure how this would work. I guess that, in-universe, it's supposed to whip around and attack enemies? 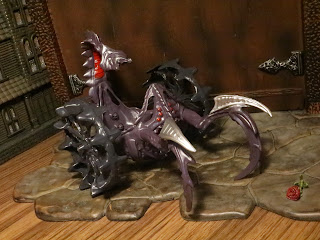 The Rumbler accessories definitely feel pretty vital to the Rumbler rather than just add ons. With the scorpion-like tail and the claws on the front the Rumbler really takes on its own identity. It's a Good and a 1/2 set but when combined with the Rumbler itself you're getting a pretty cool little vehicle. I was underwhelmed by the Rumbler on its own but the accessories really do improve things, making for a complete package. The Final Faction comic book shows off some sort of harvesters used by the Kharn to mine precious minerals and such from the Earth. Could that be the next vehicle we see?
I've also reviewed the basic the Rumbler vehicle.
For more Final Faction reviews check out the following:
A.C.R.M.
Amari
Arrow ATV
Arrow ATV Weapons & Armor
Brute
Brute Striker
Churro & FD-0
Crawler
Decimator
Diabol
Drone
Drone Scourge
Huntra
Krepitus
P-131
P-131 Thunderbolt
Riptide
Ruck
The Rumbler
Scope Long Range
Shift
Shock Arms
Spc. Scope
Steadfast
Torn
X4 Turret
Posted by Barbecue17 at 5/14/2022