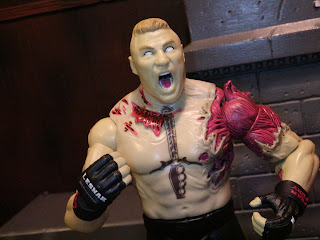 Oh my gosh! Bork Laser is a zombie! Yes, indeed: The newest series of WWE Zombies action figures includes a zombified action figure of Brock Lesnar. I am absolutely not that big of a fan of Brock Lesnar for quite a few reasons, but that doesn't mean that I'm not going to pick of a zombified version of the guy. I can respect that many collectors of wrestling figures are not that into this line but I'm digging them. I'm digging them hard. Like a madman digging up corpses in a graveyard. That's how much I dig this concept. Despite being a champion who rarely shows up at shows and who is devoid of almost any personality, Brock is a big deal and I couldn't pass him up as he makes for a pretty terrifying zombie. Let's take a look at zombified Brock Lesnar after the break... 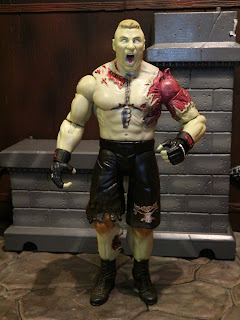 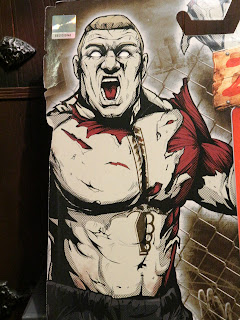 Before jumping in fully to the Suplex City that I call this review, I do want to point out how cool the art is on these packages. I really like the zombie artwork for the WWE Zombies! The design team working on these is clearly having a great time and getting the chance to be creative. 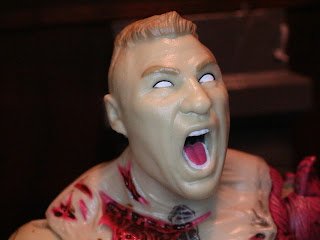 * Brock shares the extreme, pterodactyl scream headsculpt with the Elite Series 37 Brock Lesnar  and I dig it. It works really well for a zombie face, especially the milky white eyes. I know that extreme facial expressions on action figures can be a bit of a contentious issue among collectors but this one just makes zombie Brock more interesting. Is he letting out a zombie moan, in the middle of zombification, or getting ready to bite someone? You decide! 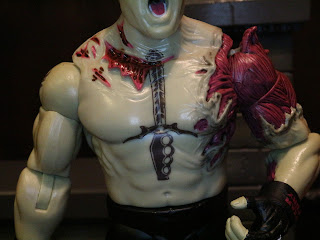 * Mattel always does great work on the tattoos on their WWE figures, so the dagger on Brock's chest is not unexpected, but the fact that they delivered a really impressive torso sculpt with multiple slashes and tears is just incredible. look at the work around his left shoulder! It reminds me of some old school McFarlane work, and I mean that as an absolute complement. It's fun and gory! 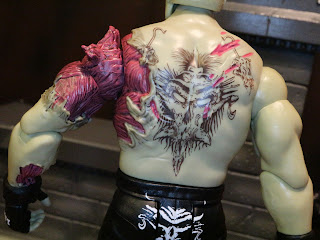 * Turn Brock around and you can see the exceptional work on his back, too! Not just the tattoo but more damage including sculpted slashes. Does that shoulder not look incredibly nasty with chunks of flesh missing? Icky stuff! 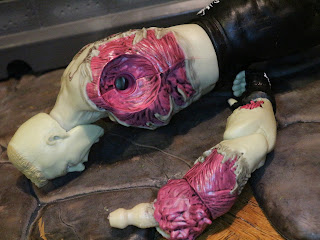 * While I was playing with reviewing Brock, his arm came out. You know what? It goes back in perfectly fine. I actually think this is an unadvertised action feature, similar to zombie Dean Ambrose's detachable hand. I dig it. This really reminds me of an action feature from some of those great toylines of the late 1990s like McFarlane's Monsters or Toy Biz's Resident Evil line. 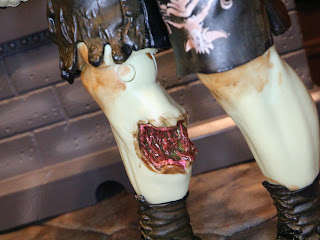 * Check out Brock's frayed trunks and the giant chunk of missing flesh in his right calf. That is some gruesome stuff, and the paintwork helps to really sell the infect. I'm no doctor (not even of thuganomics) but from everything I remember from my fourth grade First Aid curriculum, that thing looks infected. Order some Neosporin, stat! 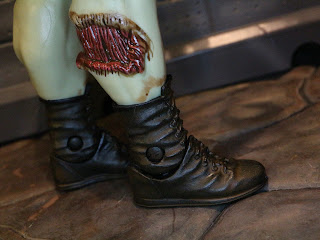 * Here's another angle on that crazy gash on Lesnar's leg. Yikes! I wonder who bit him? Probably zombie Paul Heyman. Or just regular Paul Heyman. Could be either. Darn, now I really want a zombified Paul Heyman action figure. 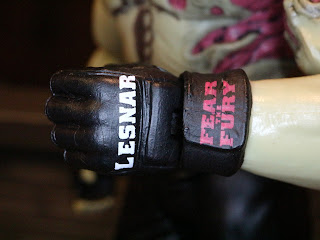 * It's not a specific zombie feature or anything but the printing on Brock Lesnar's MMA gloves is really neat and clean with the very legible text "Lesnar" and "Fear the Fury." 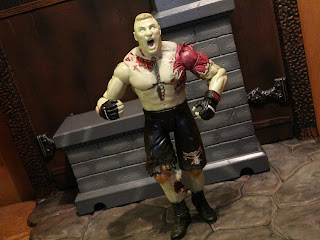 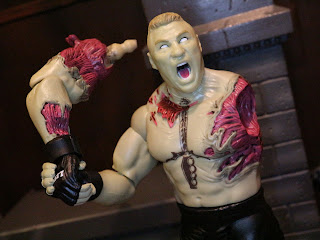 Considering the price of action figures these days, I doubt you'll find much cooler figures than the WWE Zombies for around $12 to $14 bucks each. The articulation is pretty generous, the sculpt and paintwork is wicked, and the concept is just plain fun. This line just works for me. Brock is a pretty Epic figure and I really can't find anything wrong with him. Whether you love WWE, are just a Brock Lesnar fan, or you like big, angry zombies, Lesnar doesn't disappoint. Feel free to pair him up against the zombie Undertaker and have your own grudge match!

If you're looking for more WWE Zombies, check out these other reviews: