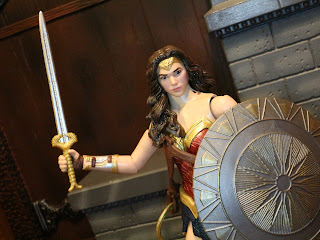 As Patty Jenkins' Wonder Woman enters it's third weekend at the box office it's probably not going to come out as the number #1 film (I imagine that will be Pixar's Cars 3) but it most likely will still come in #2. The movie is having a great run in theaters and I'm really curious how merchandising tie-ins are performing. Mattel has put out a pretty decent line of Wonder Woman action figures, particularly the Wonder Woman subset of the DC Comics Multiverse line. Today I'm looking at the Toys 'R Us exclusive standard Wonder Woman whom has been relatively easy to find (Mattel and Toys R Us have both done a great job of making sure their joint DC Multiverse exclusives have been available both in stores and online!) and whom I picked up the week the movie was released. It's kind of interesting that Mattel chose to make the "standard" Wonder Woman the exclusive, isn't it? While there are rumors that we may get one more figure in this series (possibly another Amazon exclusive or an SDCC exclusive), this could be the last figure in the line. While it would have been cool to have received a Dina Prince figure from her time in London or Wonder Woman undercover in her blue part dress, we did get three variants of the character. Let's take a look at this classically styled Princess Diana after the break... 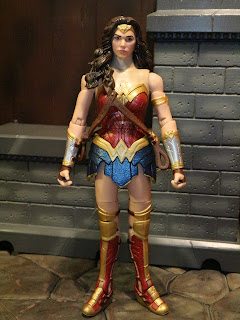 Accessories: Sword, lasso, shield, and a shield for the build-a-figure Ares. 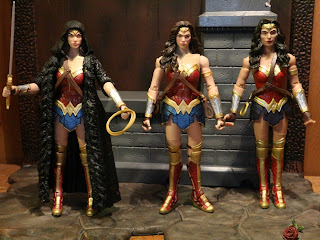 Since Wonder Woman's basic outfit didn't change much her appearance in Batman V. Superman, Mattel has reused the entire body from that toy for both this figure and the cloaked Wonder Woman figure. This figure also shares the harness and paintjob with the cloaked figure, which I've already looked at. The main differences from this figure and the previous two are the new headsculpt and the shield accessory. For the full scoop, check out those previous reviews for my thoughts on the articulation, sculpt, and paintwork. 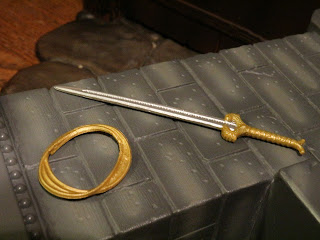 Wonder Woman includes the super cool "God-Killer" sword and the Lasso of Truth, the same as the cloaked Wonder Woman. The sword doesn't feel at all brittle; it's actually a pretty sturdy accessory and fits well in Diana's hands or in the belt loop. The Lasso of Truth, for being Wonder Woman's signature item, it seems like toy makers always either neglect to include it or make it an non-removable part of the figure. This comes off so Diana can carry it around and use it. 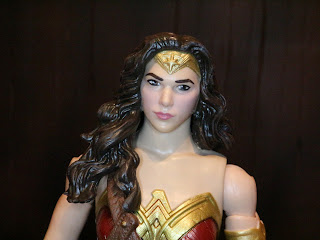 * I really like this headsculpt. Mattel really has improved the likenesses and the quality of the portraits in this series from their previous movie and TV based Multiverse lines. To be honest, especially considering this is a $20 figure, I think the quality is nearly as good a the images we're seeing from other more expensive versions of Wonder Woman. Nice sculpt and really solid paintwork. 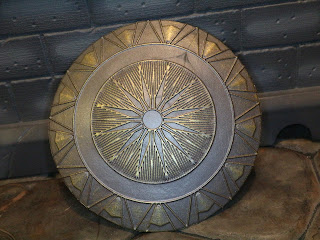 * Wonder Woman also includes a really cool shield. It's completely different from the BvS shield and has an incredible sculpt. I love the paintwork on this, too. It looks very realistic! 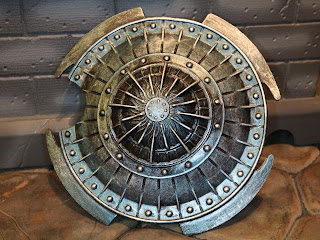 * Wonder Woman also includes... another shield? Yup, but this one is for Ares, the build-a-figure for this series. This is a pretty large shield and it's even cooler than Wonder Woman's shield. This looks great with Ares, but could fit in with a number of figures from other lines (MOTUC) or even the DC Universe Classics Ares). 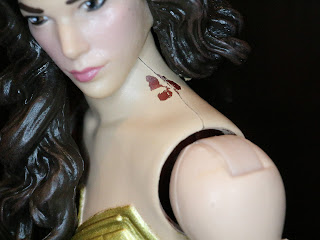 * Wonder Woman actually has some decent head articulation. Unfortunately, there are some odd brown paint rub spots on her neck and shoulders. It's probably just paint rub from the hair but it's pretty noticeable when moving Diana's head. 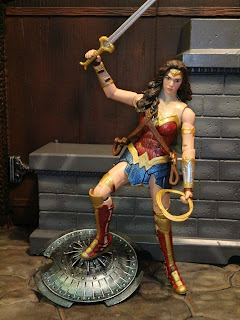 I really, really like this figure. While she has a few of the problems of the previous figures using this sculpt (some limited articulation) she's also much improved. Plus, she comes with some great accessories and a cool shield that can be used for Ares or any other action figure needing a wicked cool shield.  While I still question the logic of making this version of Wonder Woman an exclusive, she's a solid figure. I'd give her a Great rating. She's an improvement over the previous Gal Gadot inspired Wonder Woman figures and is just a darn fine Wonder Woman on her own. Since the upcoming Justice League version of Wonder Woman doesn't appear to be much different from this one (DC doesn't seem to be all about changing the movie costumes like Marvel), you could probably get away with picking this one up now to be the default Wonder Woman in your Mattel movie-based Justice League.

If you're looking for more DC Comic Multiverse action figures, check out the following: