Action Figure Review: Talon Fighter from He-Man and the Masters of the Universe by Mattel 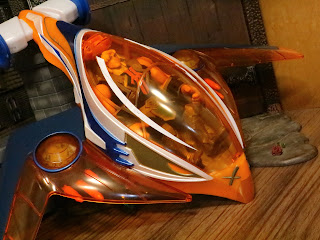 Maybe I just forgot I saw it somewhere before but I was pretty surprised to walk into a Walmart a couple weeks ago and discover a Talon Fighter on the shelf. Based on the new Netflix CG animated He-Man and the Masters of the Universe series, this is a slightly more futuristic take on the Talon Fighter that really does have some of the characteristic of the vintage vehicle. It's a sleek, single pilot flying vehicle that is bright, colorful, and perfect for swooshing around the house. I'm pretty sure I've talked about swooshability before, right? That's the satisfactoriness level of a toy based on something that flies. You know, how fun is it to take it in one hand and make it "swoosh" around the house or yard. I was never a big Captain Planet fan but as a kid I had the Geo Cruiser from Tiger Toy's Captain Planet toyline and, man, that thing had some major swooshability. I used to pick that thing and up and rollerblade around my cul-de-sac with it, pretending like I was flying it. I was definitely influenced by Star Fox. When I discovered Star Wars I was definitely met with no end of swooshable vehicles but, being a bit older and starting to consider myself a collector, my swooshing was mostly reserved for inside the house. That little trip down memory lane is simply to say that while this is meant for kids and completely different than the excellent MOTUC Talon Fighter from 2015, this is a very swooshable toy. is it worth picking up? Let's take a look at it after the break... 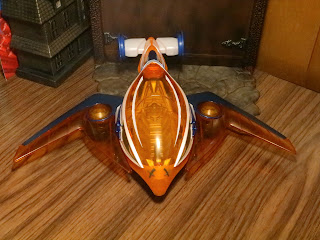 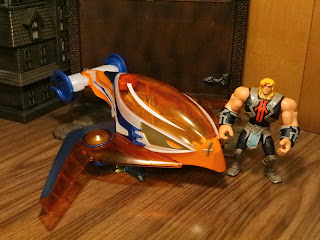 * The Talon Fighter is a pretty decent sized vehicle. The box it comes in is pretty large already though the wings come unattached. The plastic quality feels really solid, too. Nothing cheap about the durability. There's the standard He-Man from this line to give you a sense of scale. 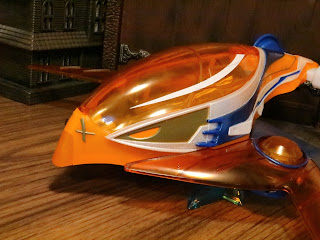 * The design of the Talon Fighter in this line does nicely borrow from the colors and design of the vintage toy. It's bird-like, especially with that cool beak at the front, and it has translucent blue talons in place of landing gear. The orange and blue color scheme also harkens back to the vintage toy, making this one easily recognizable as a modern take on the original. 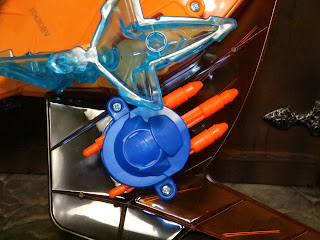 * Under each wing is a missile launcher with three missiles. The center launcher fires a projectile while the two side launchers are for storing extra missiles. You press the round buttons on top of the wings to launch the missiles. It works pretty well. 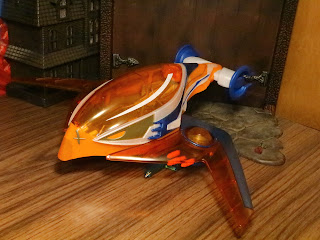 * The wings are translucent, giving this a very high-tech feel. It reminds me of a toy we might have seen during the 200x era, but sleeker and less intentionally over-designed. 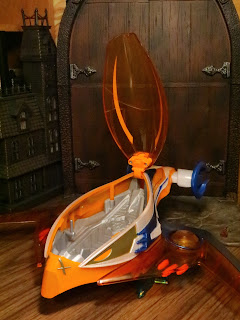 * The canopy opens up and there is room inside for one figure to safely control the vehicle. No real unique features inside but there are some handles for a figure to hold onto. Most figures fit inside, though obviously some with more unusual body shapes don't work (like Orko). 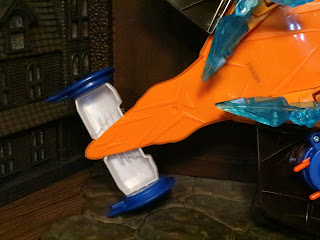 * There's a piece at the back that looks like spinning thrusters or cannons or something but it ends up not doing anything. Those little blue discs seemed like they'd be an extra play feature but they're locked in place. A couple more play features would have been really fun here. Even just a place to store the Power Sword or a removable engine compartment. Little stuff like that always goes a long way towards making a vehicle fun. 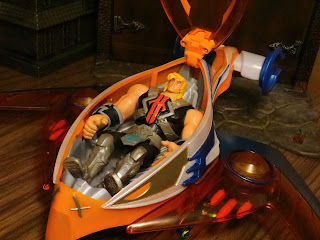 * My daughter is not a big fan of this new take on MOTU (my wife and I actually like it quite a bit) and she tends to refer to it as "Fat He-Man" due to He-Man's bulkier, more Pixar/ Dreamworks-ish build. That being said, getting He-Man in here is a tight squeeze and I had trouble getting him in and out. The cockpit probably should more easily accommodate the main character, wouldn't you think? 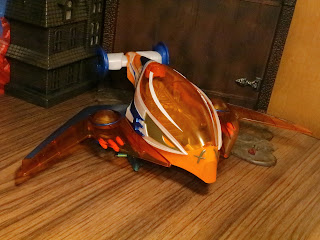 The Talon Fighter gets a solid Good from me. I like the design, I like the quality, but there's not much more to it than what you see. The missile launchers are fun but another more imaginative feature or two would have been welcome. I imagine this is one kids will have more fun with than collectors. It is a rather decent sized vehicle, though, and I'm still trying to decide how to display it since I'm not planning to make it a centerpiece item or anything but it does need a decent amount of space.

For more of the Talon Fighter check out my review of the Mega Construx Panthor at Point Dread set.