Action Figure Review: Stratos from He-Man and the Masters of the Universe by Mattel 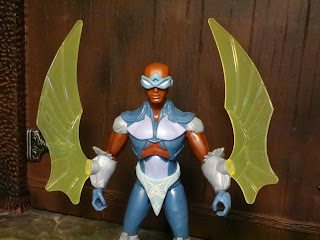 Back in March I reviewed the 8 1/2 inch Stratos figure from Mattel's He-Man and the Masters of the Universe line but now there's a standard version in the 5 1/2 inch line, too. Stratos played a major role in season 2 of the show, sometimes as an antagonist to the Masters, sometimes as an ally, and sometimes he was just doing his own thing. The original concept for Stratos in the vintage line was intended to be a villain (he even appears that way in the minicomic "He-Man and the Power Sword"), so maybe that was a source of inspiration for having Stratos start off in conflict with the heroes? Stratos is one of the designs in this new series that is the most unrecognizable from his vintage design as his color scheme is completely different. I do like the character, though, and he looked like he would make a fun action figure. How did he turn out? Let's check him out after the break... 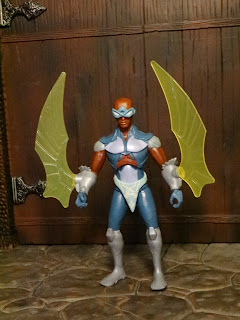 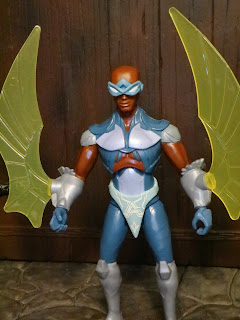 * I'm repeating myself from my review of the 8 inch Stratos but this version of Stratos definitely does not look like the bird man that the vintage toy did. The original Stratos even had some unusual, non-human body and facial features, but this version of Stratos seems like a regular human (Eternian) in an elaborate costume. His outfit is made up of armored pieces, like the boots, gauntlets, and shoulder pads, with a blue outfit that has a feather like design. There are some feathers at the ends of the wrist bracers but it's tough to tell if they're actually Stratos' feathers or just part of his costume. The paintwork is still neat and clean here though there's not a ton of extra applications. The detail on his loincloth is cool, though, with a nice print. 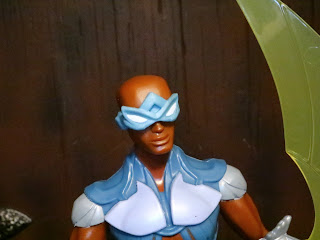 * The Stratos figure looks like Stratos on the show, so that's a plus. The visible parts of his portrait look good and his goggles are pretty cool. They look like a separate piece glued on, so they're not removable. 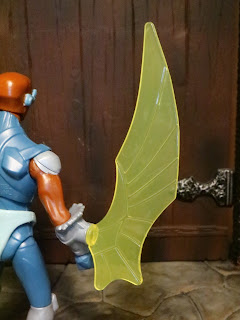 * Stratos has translucent yellow wings on both of his forearms. They're not removable like the wings on the larger figure but they do rotate so you can position them. I imagine they'd be pretty cool swapped back and forth as wings used for flight and as weapons. Swing the tips forward and they look like dual energy swords. Nice! 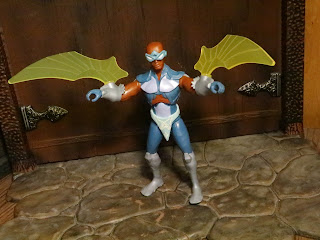 * I still wish these figures had balljointed shoulders rather than just swivel joints (the 8 1/2 inch figures have better articulation) but everything else I'm fairly OK with, especially at this price point. These are sturdy figures designed for play and the Power Attack feature is still pretty cool, functioning like an updated version of the vintage action waist feature from the original toyline. These are fun to mess around with and Stratos' wings make him really fun to swoosh around. 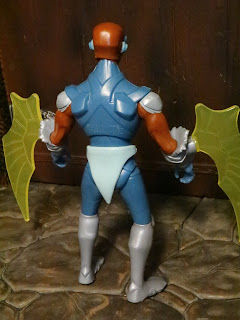 
* Most of the figures have unpainted backs and Stratos is no exception. A few details would have definitely just improved things overall. He's a bit dull from the back. 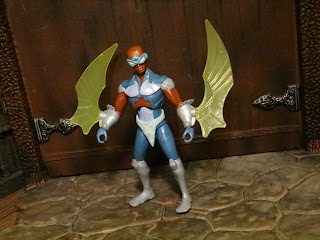 Stratos has a fun design; armored character, translucent wings, sleek aesthetic. He definitely seems like a figure that many kids would have fun with. As a MOTU collector and action figure enthusiast, I like the toy but I do wish for a bit more. An accessory would have been nice, or removable goggles. Maybe a jetpack of sorts? Something that gave him just a bit more of an edge and a bit more detail. Still, he is fun and well made. I'm giving Stratos a Good and a 1/2. He matches his appearance on the show well and those yellow wings do have quite a bit of presence in person.

If you're a Stratos fan then check out my review of MOTUC minicomic inspired Stratos, Trap Jaw, and Prince Adam, the Origins Stratos and Stratos (Minicomic), the Netflix He-Man 8 inch Stratos, the M.U.S.C.L.E. green Stratos from series #2, the minifigure Stratos from the 200x Heroes Vs. Villains Gift Pack #1, the Mega Construx Stratos and the Mega Construx Heroes Stratos, the ReAction Stratos (Blue Wings), the deluxe Play Set from Colorforms, the Monogram International Stratos bag clip, the Club Grayskull Stratos, and Super7's Neo-vintage Stratos.