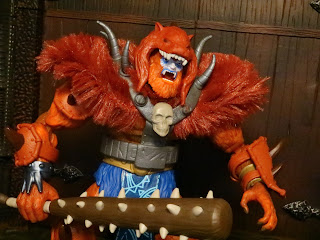 Around a year ago Mattel's Masterverse line started showing up in stores and quickly delivered us a fairly nice roster of characters from Masters of the Universe: Revelation. While the figures were clearly based on that show, most of the figures were also quite true to their classic/vintage designs. Ever since the Masterverse line hit, though, Mattel has assured us that it wasn't just going to deliver figures based on Revelation; Masterverse was always intended to be an umbrella line for multiple area of Masters of the Universe.  Figures from the second sub-line from Masterverse, New Eternia, have been showing up lately and I'm kicking things off with a figure that surprised me when I stumbled upon him on a Target shelf: Beast Man. The New Eternia Beast Man is a rather impressive figure who just oozes personality and that classic MOTU feel. So classic, in fact, that he's based on some of Mark Taylor's legendary concept art, especially drawing elements from the Ursis Prime concept (it was deemed to be too similar to Chewbacca and thus continued to evolve). I love MOTU more than about any other property and getting a line that both draws from the concept art and does something new with it is a dream. Let's take a look at the New Eternia Beast Man after the break... 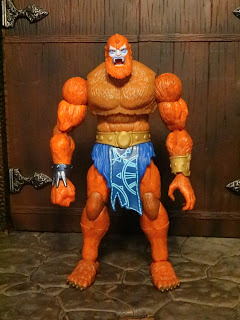 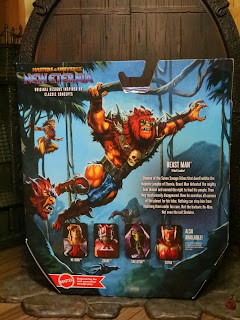 The Packaging:
* I don't usually show much of the packaging but Beast Man has some really cool art on the back and a neat bio that tells the details of his role in the New Eternia concept. This version of Beast Man is the shaman of the Seven Savage Tribes and he wears the fur of the bear demon he defeated. Guess who that bear demon is? It looks like Ursis Prime from Mark Taylor's concept sketch. Neat-o! Beast Man is the leader of his tribe but ever since they disappeared under mysterious circumstances he has been on a quest to find them. Interesting backstory for Beast Man. He's definitely not just Skeletor's dumb lackey here, which is pretty cool. 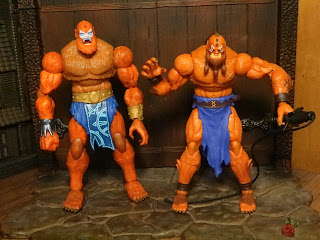 Comparison:
* Guess what this version of Beast Man and the Revelation Beast Man have in common? Other than the colors, nothing. This guy is a completely unique figure. He's taller, wider, and somehow even more ferocious looking than the previous Beast Man figure. 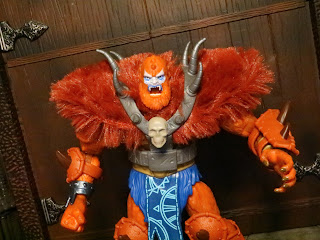 * Beast Man comes with two separate outfits and the first is his New Eternia inspired outfit. It's based on the armor of the Ursis Prime sketch with actual soft goods fur coming out from underneath the harness. That's supposed to be the pelt of the mighty bear demon mentioned in the bio, by the way. It's a cool look for Beast Man, especially with those crazy spikes on top and the skull in the middle of the harness as a decorative flourish. It's a smaller skull and definitely not from a bear, so I wonder who it belongs to? 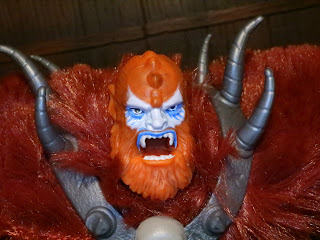 * The headsculpt for Beast Man is very classic and faithful to the vintage toy with more detail and better paint applications. I love the detail in Beast Man's "beard" and the look of his eyes. He's a crazy looking guy who looks more intelligent and cunning than most renditions of Beast Man out there. 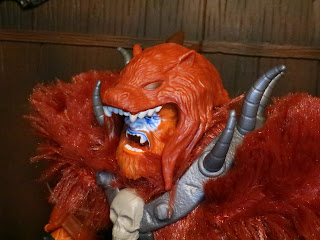 * What is Beast Man wearing on his head? He's turned the demon bear's head into a hood. You know, like the Ewoks. What an interesting concept. It definitely makes this feel like a more barbaric toyline than most MOTU stuff and nicely differentiates it from other Beast Man figures that have come before. 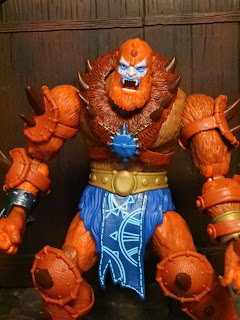 * Beast Man also comes with a classic styled harness. The MOTU: Revelation Beast Man didn't come with this, so it's a completely new piece. It looks really nice with excellent paint applications. I'm loving how most of these deluxe MOTU figures come with alternate outfits. It's a cool feature that really makes them feel deluxe. 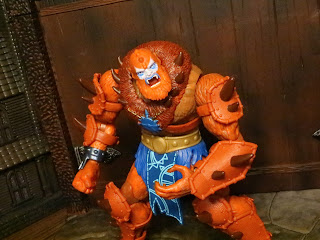 * Beast Man is sporting two pieces of armor on each arm! He's got his classic bicep pads but he also has forearm armor. The forearm spiked pads are different with a larger pad on his left arm and a smaller, single spiked pad on his right forearm. They stay on quite well and really add some more heft to good ol' Biff Beast Man. You can also add it on to the Masterverse Beast Man as he didn't come with any armor. 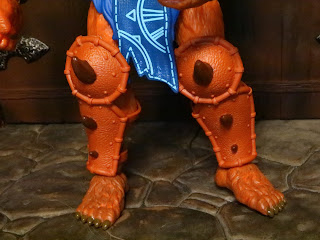 * Beast Man must have gotten some inspiration from Man-At-Arms as he's now sporting kneepads and shin guards. These are one piece and they stay on quite securely as well. There's no part of Beast Man that isn't covered with spikes, claws, or teeth now! 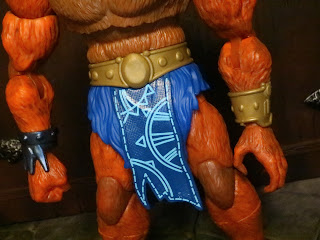 * Beast Man's furry trunks and loin cloth combo are great. The design on his loin cloth definitely seems more sophisticated than what Beast Man usually wears, so perhaps it's something connected to his role as the shaman of the Seven Sages Tribe? 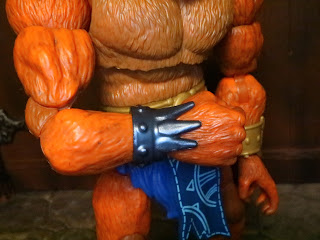 * The vintage Beast Man figure had a spiked weapon sculpted onto his hand. it wasn't painted and wasn't terribly noticeable, but it was there. This version of Beast Man has a larger spiked wrist weapon that is a separate piece (though not removable) and which seems to be based on the claws on the Ursis Prime sketch by Mark Taylor. This little detail really thrilled me, probably more than it should have. 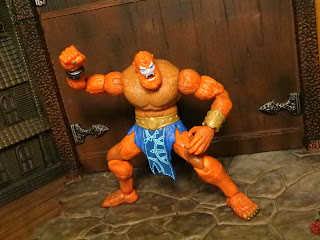 * Beast Man has the same articulation as most other Masterverse figures which, for the most part, is a good thing. Some of the joints were a bit tight at first but they got moving nicely after a little work. You shouldn't have any trouble getting Beast Man into any some awesome battle poses. 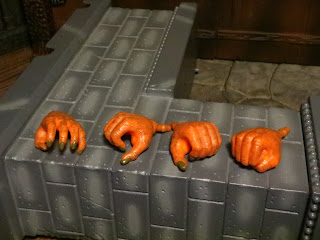 * Beast Man comes with four interchangeable hands. There's a slash left hand, a pair of standard grips, and a right handed fist. They swap easily and give you some options, including the option to allow him to wield both of his weapons at one time. 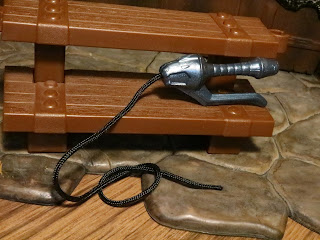 * Beast Man's know for using his whip and this figure comes with a well made toy whip. It's different than the Revelation version but still features a string for the whip itself, like the vintage toy. There's also a face of some sort on the handle. Beast Man is the master of beasts, after all. A Beast Master, if you will. 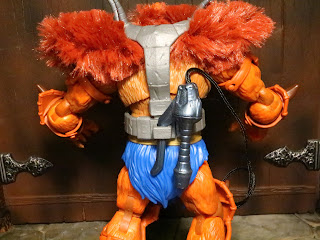 * There's a slit on the back of Beast Man's armor that his whip can fit right into. Coil up the whip itself in a loose knot and it works perfectly. 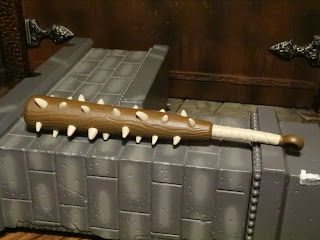 * Beast Man also comes with a massive spiked club. Even cooler than just being a huge spiked club is that the spikes are separate pieces (or part of a separate piece) that stick through the shell of the club. I feel like I've seen this in some art before but I can't quite identify it. Is this based on something from MOTU lore and art or is it a new creation from the Masterverse team? 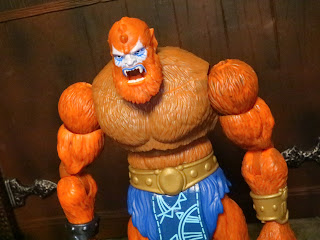 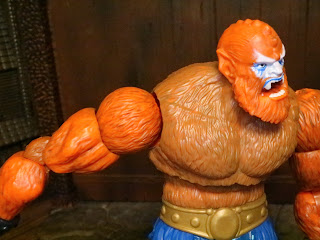 * The shoulders are kind of funky looking. I think this was done to improve the articulation when Beast Man is wearing his New Eternia armor but in his classic outfit or shirtless it looks a bit off.

Despite some issues, I have to admit that none of those problems actually take away from my enjoyment of this figure. He's crazy impressive and the design is such a tribute to the concept art and designs of Mark Taylor but with some additional added features that continue to bring a freshness to the line. Beast Man is a deluxe figure who feels deluxe and who is loaded with cool accessories and multiple armor pieces to change up his appearance. He's an Epic figure and he gives me very high hopes for the future of the Masterverse New Eternia releases.