Action Figure Review: Mo-Squit'ra from He-Man and the Masters of the Universe by Mattel 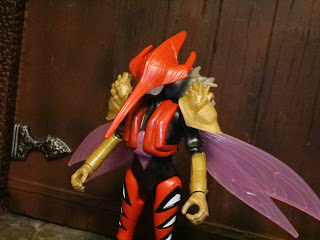 I love Mosquitor but there's always been a problem with the character: Only female mosquitos bite. OK, yeah, Mosquitor isn't really a mosquito. Not an Earth mosquito, anyways. He's a Kribleen insectoid vampire, so who knows what his deal is. In the Netflix He-Man and the Masters of the Universe series there have been some major changes to characters and (presumably) in place of Mosquitor, we now have Mo-Squit'ra. Mo-Squit'ra first appeared in the second season as a villain but ended up kind of reluctantly working with Stratos to defend Avion. Along with Ram Ma'am, Mo-Squit'ra is the second character in this show to kind of get gender-swapped, though both of these characters are really unique and so different than their predecessors that I kind of have a hard time of seeing them as just a gender-swap. Krass/ Ram Ma'am is one of my favorites in the new show and since Mosquitor has rarely appeared in any MOTU media, Mo-Squit'ra is far more developed than he's ever been. Let's take a look at Mo-Squit'ra after the break... 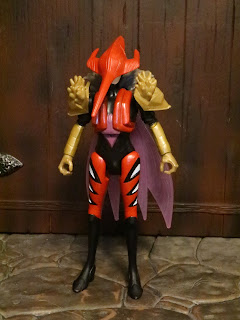 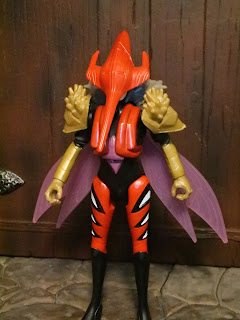 
* The He-Man and the Masters of the Universe figures are definitely simplified from their animated counterparts but they're still quite colorful and capture the newly designed characters fairly well. Mo-Squit'ra really doesn't have too many things in common with the vintage Mosquitor design other than the shape of the helmet. She still has a cool design, though, with a sleek, insect inspired look. Her pants are really cool with a red, black, and white design that reminds me of the vintage Mosquitor's eyes. She's got some tanks or something on her chest that store the energy she steals (it's pretty cool how she steels energy in the show; she can track different energy signatures and they give her different abilities) along with some spiky shoulder pads for a bit of extra protection. 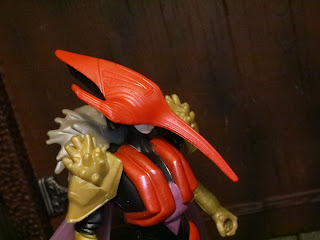 * Mo-Squit'ra's helmet is definitely her most distinctive feature and the design elements that really ties her back in with the vintage Mosquitor. It's shaped like Mosquitor's head, complete with a proboscis for draining energy. There's a little bit of her face visible underneath the helmet but no real facial features on the helmet itself. There's some detail and lines, but nothing really like eyes or anything (maybe some simple rectangles that she can somehow see through?). 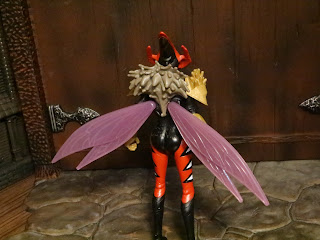 * Mo-Squit'ra has wings that are removable and can swivel. They're translucent and purple, so they look really cool when light hits them. 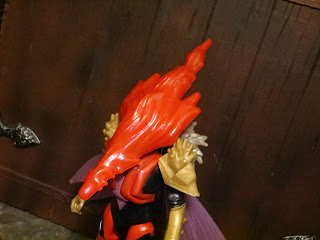 * So... Mo-Squit'ra's accessory actually fits over her head. It's like an aura of energy or something. It fits on top of her head rather loosely but does look interesting. It's cast in a a semi-transparent plastic and functions as sort of an "effect" piece for the figure. 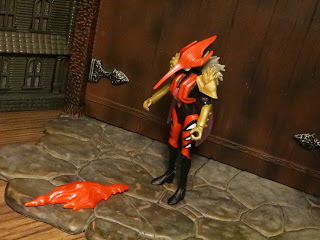 * This line has rather basic articulation so there's not a ton of movement, but Mo-Squit'ra is a rather durable figure. She also has the Power Attack feature, which for her is a springy mid-torso hinge. You can pull her upper torso back and release her to launch the energy projectile. It works... OK. Kind of silly, kind of fun. These are very clearly designed for a younger audience so it's cool to see some unique play features. 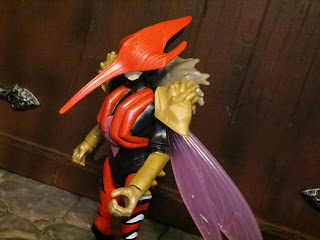 
* My only real problem with Mo-Squit'ra is that her shoulders can't actually rotate any higher than this. The shoulder pads hit against the spiky thing on her back and prevent any motion. This is simply a design flaw, and a pretty egregious one at that. 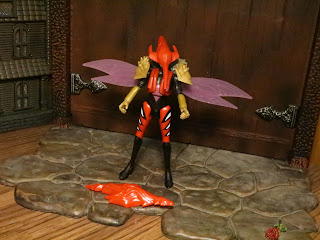 I really enjoyed Mo-Squit'ra on the show and was excited about the prospect of the figure. She's OK. Cool design, great color scheme, interesting energy blast idea, but the weird issue with the arms and some of the lack of detail and paint definitely brings things down a bit. Overall, I'm giving Mo-Squit'ra a Good and a 1/2 rating. Not a great figure by any means but fans of the new show and fans of different takes on classic MOTU characters should definitely find something of interest here. Plus, these toys can still be found for less than $10 bucks, so that makes them a bit more appealing.


If you're just looking for Mo-Squit'ra, this is the first figure of her that I've reviewed. If you're counting her as a variant of Mosquitor, I've also reviewed the MOTU Origins Mosquitor and the Funko POP! Mosquitor #996.