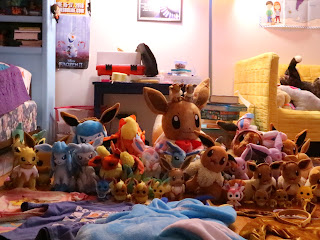 Hey guys! It's Umbreon 13 (AKA Adora) and, if you do not know, I collect Pokemon. I mainly collect Eevees and I want to show you my collection.  I have many more but my whole room would of had Eevees in it.  I thought that before I talk about my collection I would tell you how I started collecting.  When Super Smash Bros. Ultimate came out my dad got it for me and we started playing and got a trophy. It was the Eevee trophy and I thought it was the cutest thing ever!  On Christmas morning of 2015 I got my first Eevee (She's the one on the left of the Sylveon Pop!), and that is how I started collecting.

In this picture there are 52 items that are part of my collection.  I will start from top to bottom. First, big Eevee; she is the largest of my collection and is 17 1/2 in. and on top of her are the two smallest stuffed Eeves in my collection. They're 4 in.  There are three of the the Build-A-Bear Eevee's: Glaceon, Flareon and Eevee and, yes, Glaceon and Eevee are wearing fake ears. In the back there is Evoli ( Eee-voo-lee) a French and English speaking Eevee.  And then we have my medium Eevees with my giant Eevee Pop! The Jazwares and Tomy plushies are some of my favorite brands of Pokemon toys because I like that they're sitting. Then there are my Funko Pops. I like to collect them the most since they have shiny Pops, flocked Pops ,and all of the characters.  And last, but not least, my outfits I have four different outfits including my Vaporeon blanket.
Before it's finished I'd like it if my dad, AKA Barbecue 17, would say a few things about it.

Hey everyone! Barbecue17 here. Pokemon came out when I was a freshman in high school and while my friends and I liked it and played the games and the card game, I secretly wished it was something that had been around when I was a kid. I always liked the characters but I sort of lost interest in Pokemon until I introduced it to Adora when she was quite little. It was seeing that Eevee trophy in Super Smash Bros. Ultimate that seemed to seal the deal for her, though, as this kid is now obsessed with Eevees! Seriously, she goes crazy over these little guys and goes nuts when she find a new one. Eevee and her evolutions are all incredible designs and they're absolutely adorable. She really loves all things Eevee and it's been fun to help share in her collecting. I always wonder if she'll still be enamored with Eevee when she's my age in the same way I'm still enamored with Masters of the Universe, G.I. Joe, Star Wars, and the other things of my childhood. I think it's probably a given.