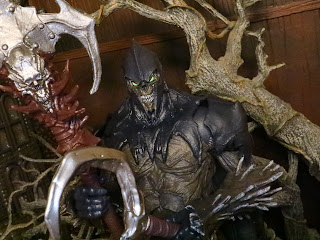 Let's take a look at another Spawn figure, but one who isn't Al Simmons. This time it's Raven Spawn, AKA Kray-Von Gore. Kray-Von Gore is one of Malebolgia's Death Knights and an adversary for Al Simmons who is still around in the comics. Raven Spawn first appeared a little over 20 ago in Hellspawn #7 and had a figure shortly after as part of Spawn series 21: Alternate Realities. This is actually the second Raven Spawn figure in the modern Spawn line as Raven Spawn was released last year (2021) as part of the first series of standard releases. I never picked that one up but I ended up grabbing this one. This one is officially called Raven Spawn (Small Hook) and the weapons do seem to be the only legitimate differences between the figures. That's kind of weird, right? He sure is a creepy looking figure, though, so let's take a look at him after the break... 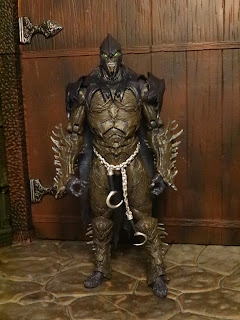 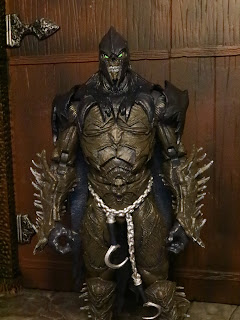 
* Raven Spawn definitely has an impressive sculpt. It's the same as the previous figure so far as I can tell but if I'm wrong about that let me know. There's a lot of detail on his body which look more like some sort of exoskeleton rather than regular armor. There's visible musculature and stuff though there are decorative flourishes, too, like the scull on his waist. He's wearing a non-removable cloak that's a very dark blue (almost black) and a chain around his waist with some small sickles hanging off of it. It's a separate piece made from a more rubbery material but it's not removable or anything. 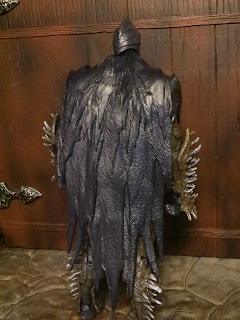 * Here's a shot of the back of Raven Spawn's cloak. It hangs down to his calves and looks like it's made of layers of different material (though it's really one solid piece). 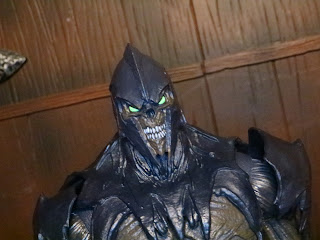 * Kray-Von Gore is a spooky looking guy! He's wearing a very medieval looking battle helmet with only a sliver of his face invisible. It's a pretty gruesome face, though, with bright green eyes and a very zombie-like face. The teeth look fantastically wicked, as does the hole where his nose used to be. 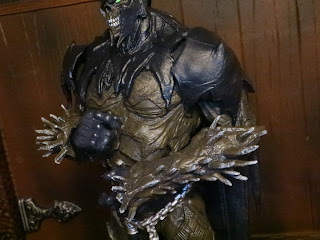 * Raven Spawn is wearing some spiked bracers that have some smaller spikes (almost like the little teeth on a parasite) on the insides and huge spikes slanted back on the outsides. 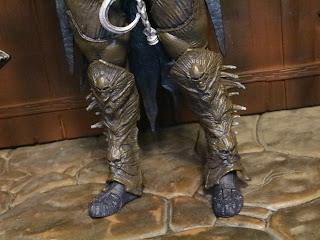 * He's also rocking some pretty epic boots. Check them out! The detail is fantastic with lots of spikes and skull designs on them. 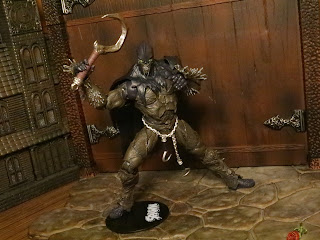 * While the cape restricts his movement a little bit, overall the articulation is quite good on Raven Spawn. He has the same articulation as most other recent Spawn figures which means solid, sturdy joints with a great range of motion. His joints aren't as smooth as some other figures but you shouldn't have a problem getting him in cool poses, particularly using the nasty looking bladed weapons he comes with. 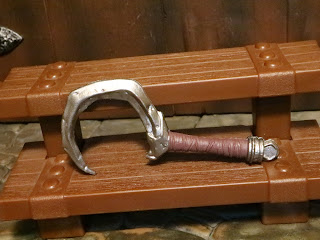 * Since this is Raven Spawn "Small Hook" I'm reviewing today, we'd better take a look at his small hook. He comes with a smaller sickle than the previous figure that doesn't have a chain attached. It's a neat melee weapon that you don't see all that often in action figure accessory sets. The blade looks very worn and weathered but still capable of inflicting some nasty damage. Since a sickle is used for reaping and harvesting, it ties in nicely with the theme of Raven Spawn as a Death Knight, similar to the Grim Reaper carrying a sickle or scythe. 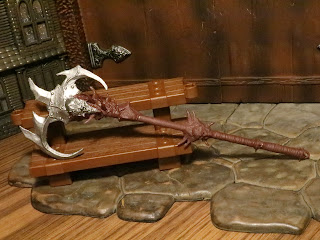 * The second accessory is a long staff with a series of bizarre hooked blades on top. There's a lot of detail here and it's a nicely sculpted weapon molded in sturdier plastic than some of the other Spawn accessories. It could have definitely used some more paint on the handle, however. 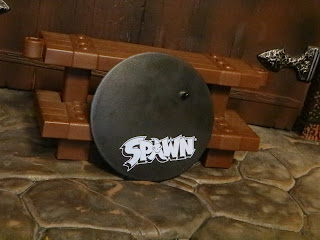 * Raven Spawn comes with the same basic disc stand as the rest of the figures in the line. I'm glad we always get a stand with these figures as it makes them easier to display and they just look so darn classy with them included. 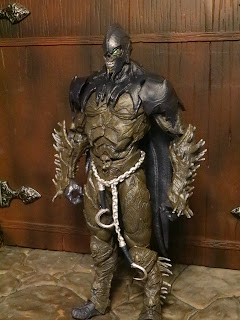 * I love the sculpt and the overall ancient and rotted feel of Raven Spawn but he really feels like he needs some more paint applications to bring out all of that excellent sculpted detail. While many of the older McFarlane figures, especially those from the late 1990s to 2010s, had fantastic paint but limited articulation, the newer figures seem to often have the reverse issue: Limited paint but fantastic articulation. A few extra paint apps would definitely break up all of the brown on this guy and help him stand out a bit more. 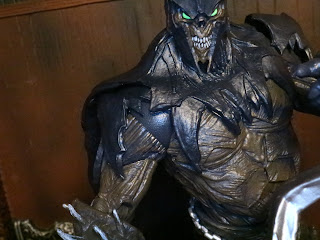 * The way Raven Spawn's cape is attached is interesting, but a but problematic. The main cape simply fits over the shoulders but there is a piece of the cape attached to the biceps as well. It looks OK but tends to interfere with shoulder and bicep movement. There's also a plastic piece between the shoulder and the torso that's dark blue which is intended to hide the longer ball joint peg that fits in Raven Spawn's torso. It's an interesting design feature but it does look kind of weird since it's solid blue around his mostly brown body.

Raven Spawn has a really cool sculpt and fantastic accessories but the paintwork is just a little too bland for such a neat looking figure. He definitely feels like a figure that needed a little something extra to highlight that incredible exoskeleton and the interestingly designed cape. Overall, I'm rating Raven Spawn as Good and a 1/2. He's not one of the best figures in the modern Spawn revival but he's not a bad figure, either. It's just weird that, for such a frightening character, he feels kind of dull. It's also weird that the only differences between this figure and the previous one, so far as I can tell, are the weapons. That's a weird variant to put out less than a year after the first figure dropped, don't you agree? I would have though a really unique paint scheme would have really set him apart.

While this is the first figure of Raven Spawn/ Kray-Von Gore I've reviewed, I've looked at many other Spawns: For Al Simmons, the classic Spawn, I've reviewed the classic Commando Spawn and Nuclear Spawn, the movie based Burnt Spawn and standard Spawn, the Mortal Kombat 11 Malefik Spawn (Bloody Disciple) and Spawn (Bloody), and the modern Spawn with throne, for Chenglei, there's the modern Mandarin Spawn Deluxe, for Sir John of York there's the classic Medieval Spawn, and the still mysterious Ninja Spawn from the modern line.