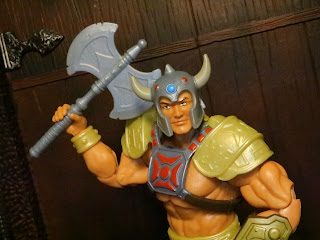 Ready for another review from Mattel's Masterverse: New Eternia subset? I just reviewed the New Eternia Beast Man and now it's time for the New Eternia He-Man. The idea behind the New Eternia line seems to be taking the vintage concept designs, so far all from Mark Taylor, and changing them up a bit with new story elements. It's a cool idea that pays tribute to the history of the brand while also exploring some new territory. The packaging for New Eternia He-Man paints He-Man as an explorer of Eternia, a world on the edge of destruction, who must stop Skeletor from forging the Scimitar of Chaos. It's an interesting, seemingly darker take that would be really intriguing if explored as a comic series or something. Of course, Masters of the Universe has always been about the toys first and foremost and that's what we've got here. This take on He-Man looks to be based on Mark Taylor's concept art (which evolved from his creation, Torak) with the Viking-like helmet, the classic axe, and the boot dagger. Masters of the Universe Classics found great success with adding concept art based characters to the line and it's nice to see the trend now continue with Masterverse. Let's take a look at New Eternia He-Man after the break...

(I want to add a special thank you to the Battle Ram Blog. They are probably the best resource on the internet for Masters of the Universe information about the vintage toyline and have a wealth of knowledge. Check them out as I refer to them frequently for their fantastic art collection and image galleries.) 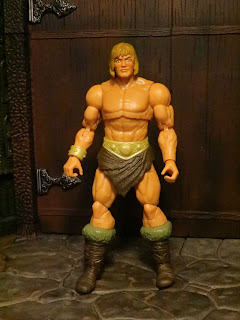 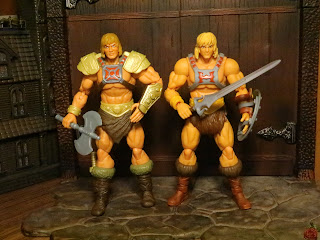 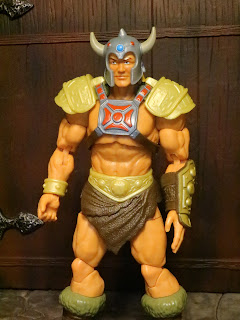 The Positives:
* Here's what New Eternia He-Man looks like right out of the package. This is still clearly He-Man but with more armor. Mark Taylor's original idea of He-Man was that he didn't use magic, so his power was from his strength and desire to stand up to evil. Having more armor made sense, hence the helmet. Mattel has added on some shoulder pads, too, which look really cool and definitely remind me of the movie He-Man. They're separate pieces that fit over the harness and stay in place nicely. There's some really cool design work on them that reminds me of the mixture of ancient metal and technology seen in some of the earliest MOTU vehicles and Castle Grayskull itself. Rather than furry trunks this version of He-Man is sporting a wrapped loincloth and a more elaborate belt. The body is the same as the Revelation figure but a bit more tanned. 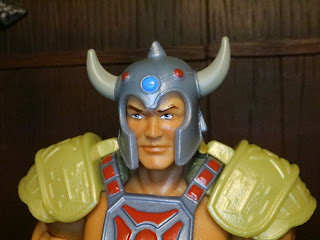 * The helmet is definitely the biggest connection to Mark Taylor's concept art and also calls to mind Tony Guerro's first sculpt of He-Man (painted by Roger Sweet). It's a different look for He-Man but that's what nicely separates this figure from the previous releases. Other than in New Adventures and probably some crazy 200x variants, He-Man doesn't wear a helmet. the helmet is a separate piece on top of the portrait (though it's not removable). 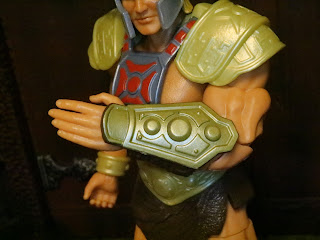 * He-Man has a much more elaborate bracer here, too. It is removable (just pop the hand off and it slides right off) but why would you want to take off something this cool? It kind of reminds me of the Dwemer armor designs from The Elder Scrolls. 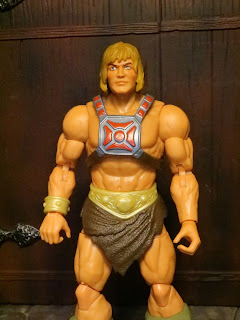 * Do you want a standard He-Man? Mattel included that too. Swap out the helmeted head for the un-helmeted head, take the shoulder pads off, pull off the oversized bracer, and you've got a pretty classic look He-man. I love the design on his chest piece. It's very unique looking from the classic design while still being recognizable. 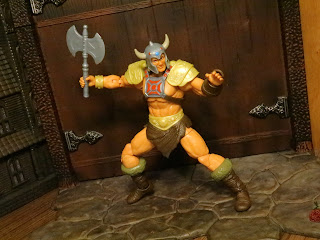 * He-Man's articulation is the same as last year's MOTU Revelation He-Man: It feels very modern with double jointed knees and elbows and most everything has a good range of motion to it. It's not as smooth as most of Hasbro's modern offerings but it rivals most everything else out there in this scale and price point. 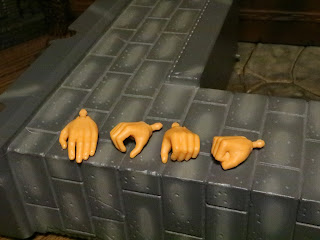 * New Eternia He-Man has the same set of interchangeable hands as the Revelation He-Man had. There is a pair of standard grips, a right handed fist, and an open left hand for smacking the jaw off of Skeletor's face. They swap easily and the pegs all feel nice and sturdy. 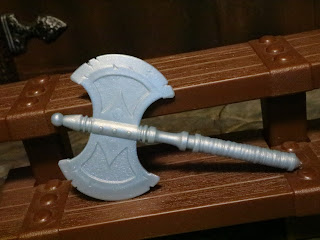 * For the past few years most of the axes that have come with He-Man figures have been based on the minicomic axe design from Alfredo Alcala's art. This axe is definitely much closer to the vintage toy axe I've always loved which matches the Mark Taylor He-Man concept art fairly well. This axe has more detail to capture the blade designs of the vintage figure, though some wear and tear has been added to the edges of the blade. This version of Eternia is a rougher, more violent place it would seem. 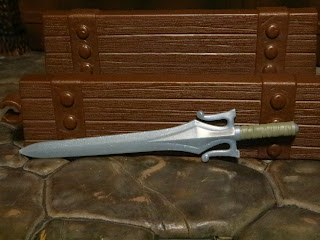 * He-Man also comes with a Power Sword. It is different from the Revelation design with more pronounced tips on the quillons and a wrapped handle, though it still has the longer, thinner blade. It's a nice looking sword that's perfect if you're displaying this figure as a classic He-Man. 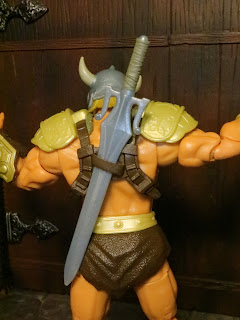 * The Power Sword can fit comfortably in the slit on the back of He-Man's harness. Also notice that the harness straps go through two slits, so it stays on very securely. 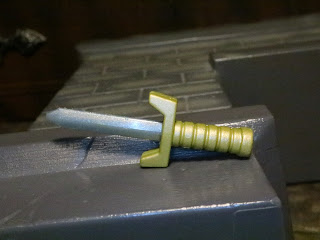 * Another throwback to the concept artwork is the inclusion of a dagger for He-man. It's a simple but neat little dagger perfect for some up close fighting. 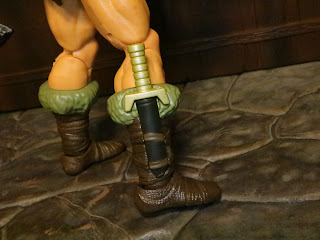 * The sheathe for the dagger is permanently attached to He-Man's right boot and the dagger fits inside securely. It looks great and turned out even cooler than the Origins boot dagger. 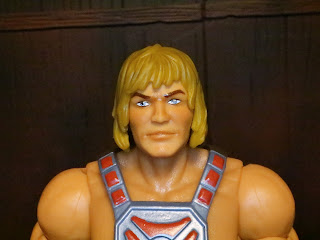 * I think it's difficult to get He-Man's look right because we all have such an idealized version of He-Man in our head. From the mouth up I really like the look of this He-Man. Great work on the hair and the eyes. But...
The Negatives:

* There's something off about the mouth. It looks like it belongs to a different figure. Or to the kid from the Pajama Kid meme. 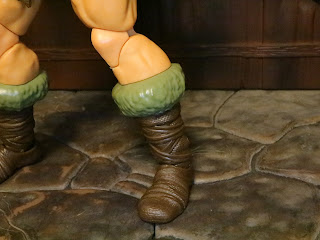 * The bottom of He-Man's boots look cool as there are lots of individual straps keeping them held on tight, but the furry collars are off. The furry texture looks too soft for this line, especially considering the crispness of some of the other details. 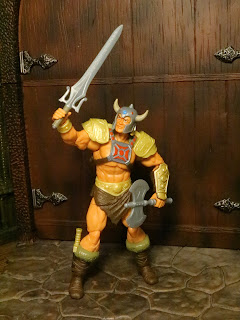 It's really exciting to see such a different version of He-Man. OK, maybe not crazy different, but he's still pretty unique from most other versions. The extra armor pieces are fantastic and the fact that you can change up his appearance is very welcome, especially considering Mattel and most retails still seem to be keeping these guys at around a $20-$23 dollar price point. The weapons are excellent, too, and there's a lot of fun to be had here. I'm really enjoying the direction of Masterverse and hope to see it continue to expand. It's been a wild couple of years for Masters of the Universe and it seems like more awesomeness is yet to come. New Eternia just seems like a really cool way to tell some new stories while paying tribute to the creation and creators of the brand and I hope Mattel really allows it to blossom into something fantastic. Seriously, a comic book based on the early concepts would be such a neat experiment, almost like a MOTU Elseworlds kind of thing, or Star Wars Infinities.


Are you a fan of He-Man/ Prince Adam? I am too! I've reviewed a variety of different He-Man figures, so check out Fabulous Secret Powers for dozens of He-Man reviews.