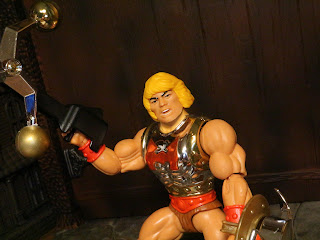 Just a little under two years ago I reviewed the vintage Flying Fists He-Man. I never owned him as a kid so it was interesting to get my hands on one, though after having him I was a bit disappointed. While he's shiny and gimmicky, the proportions are weird and the figure just doesn't appeal to me the way most other vintage He-Man variants do. Mattel is revisiting the vintage He-Man and Skeletor variants in Masters of the Universe Origins and this year they've released modern updates of both Flying Fists He-Man and Terror Claws Skeletor. I still haven't found Terror Claws Skeletor but I did manage to get my hands on Flying Fists He-Man and I have to say that he's a real improvement over the vintage toy. The proportions are better and the awkwardness of the vintage toy's neck and torso are largely remedied. While I really want Mattel to focus on getting more unique figures out in this line rather than continuing to revisit the same characters, I can understand that they want to keep He-Man and Skeletor on shelves. Let's take a look at Flying Fists He-Man and see how he turned out after the break... 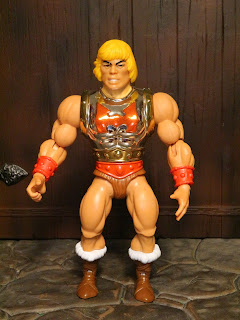 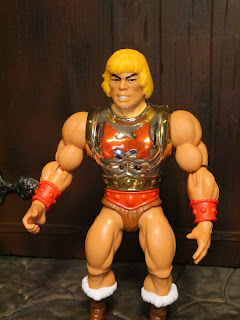 The Positives:
* Like the vintage figure, this version of He-Man is wearing armor similar to the Battle Armor He-Man figure but it's a bit sleeker and shinier with more of a bronze or gold look to it. The army is vac-metallized, just like the original toy, and it has the stylized "H/M" logo on the torso. He-Man is also sporting red details such as red wrist cuffs and a red belt, which tie in with the logo on his armor. 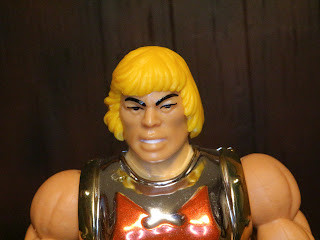 * We've seen this headsculpt a few times before. it's Mattel's take on the vintage He-Man portrait. It isn't bad and while the hair's a bit too bright, overall it looks fine and is completely recognizable. 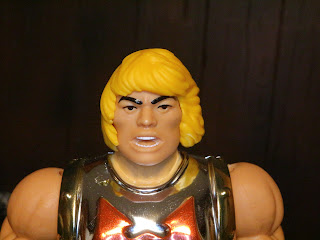 * This second portrait is even better than the first, though. He-Man's yelling and his hair's blowing everywhere, just like you'd expect in the middle of battle. This first came with the Battlefield Warriors set last summer but here the paint looks a bit sharper although there isn't a red paint app in the mouth. I love this portrait and it's my preferred look for Flying Fists He-Man. 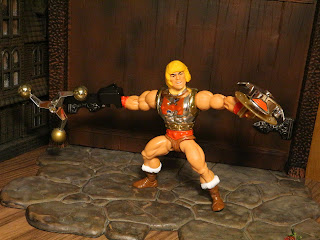 *  The MOTU Origins figures are built like the vintage toys but with modern articulation. While their bulky frames make the articulation a bit clumsy, they do feel like an evolution of the vintage line. Imagine what you would get if you mixed a vintage figure with a MOTUC figure. They're quite fun to play with and they feel very sturdy. This He-Man has some limitations due to the waist swivel being part of the action feature but overall he's quite similar to most other figures in the line. Not as modular, however. You can't break this guy down. 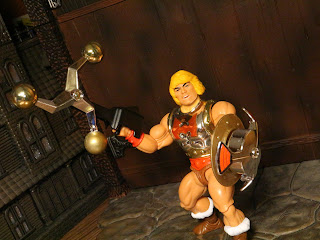 * The action feature is pretty cool and more than makes up for the lack of the ability to disassemble the figure. Spin his waist and He-Man's right and left arms go up and down as he swings his three headed mace and his shield with a rotating blade. it works nicely. I really hope Mattel does more deluxe figures to get out some of the vintage characters who are yet unmade that demand lots of new tooling and accessories. Characters like King Hiss, Rio Blast, and Modulok could really benefit from the extra features this range seems to get. 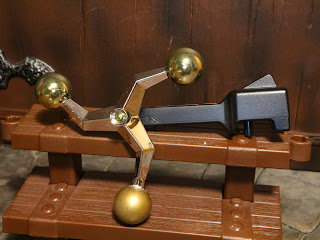 * Here's He-Man's triple headed mace. The mace wheel spins freely so that when you have He-Man's arms move up and down the balls rotate around a bit. The vintage accessory definitely isn't one of my favorite pieces as it's bulky and awkward but Mattel did a nice job recreating it here, so that's what counts. 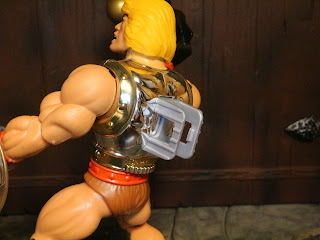 * The vintage toy had a red clip on the back but here's it silver. Why? Who knows? It's handy for more easily spinning He-Man, though there is a small thumb grip at the bottom for spinning his waist, too. 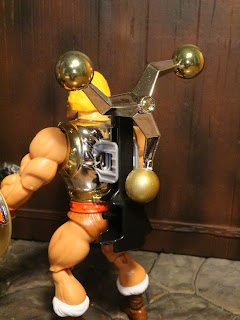 * The mace can also fit in the clip on He-Man's back for storage. Remember the G.I.Joe Windmill figure from Funskool with an actual propeller/ windmill on his back? That's what this makes me think of. At least it gives He-Man a place to carry this thing. 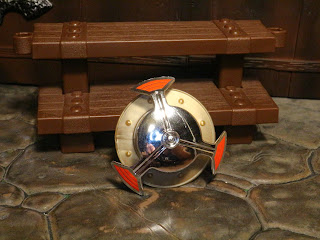 * The shield is cool, though. It's a standard small shield with rotating blades on the front. That's pretty useful, right? I'd imagine that would cause some enemies to give you some room for sure. 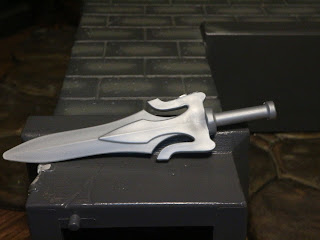 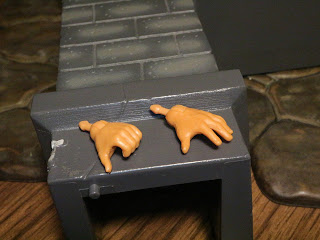 * Like most of the other deluxe figures Flying Fists He-Man comes with two interchangeable left hands. If you want a figure closer to the vintage figure then you can use the open palmed left hand. If you want this guy to be able to wield his sword and mace at the same time then use the grip. It's not a big thing but it's a welcome feature that makes the figure just a bit more versatile. 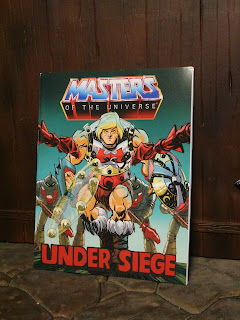 * This figure also comes with a minicomic, "Under Siege." Steven Segal is not present. 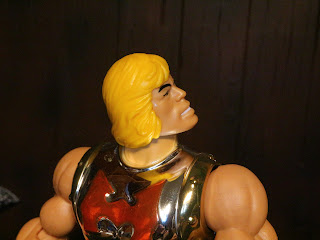 The Negatives:
* I don't know why but this head sets really loose on the body. Like, "spin his waist and his head flies around" loose. The hole is either too large or he's possessed. Fortunately, I prefer the other head, though you could always just stick something in there to pad out the joint. 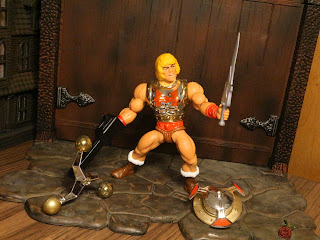 This guy is pretty darn Epic. Seriously, this variant of He-Man went from a vintage version I didn't much care to one of the best Origins He-Man figures released. Lots of weapons, vac-metal, two portraits, a minicomic, and an action feature? This guy is loaded with extras that really does make him feel very deluxe. If you shop around you can still find him for $20 bucks or less, too. Nice! Seriously, this guy is definitely Epic and well worth tracking down. Will Terror Claws Skeletor be as great of a toy? When I track him down and review you'll be the first to know!