Action Figure Review: Sorceress from He-Man and the Masters of the Universe by Mattel 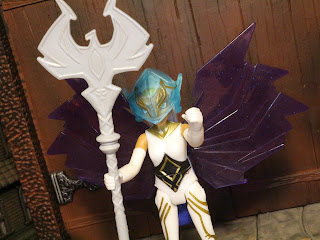 Since the next season of Netflix's He-Man and the Masters of the Universe is scheduled for release tomorrow I thought I'd check out another figure from Mattel's toyline based on the series. Today I'm excited to check out Sorceress from the 5.5 inch line. This isn't the Sorceress, Teela-Na, however; instead this is Teela in her powered up form. I think I've stated this in most of my reviews for this series but I'll say it again: In this show, all of the characters are able to draw upon the Power of Grayskull to transform. Adam becomes He-Man, Cringer becomes Battle Cat, Krass becomes Ram Ma'am, Duncan becomes Man-At-Arms, and Teela becomes Sorceress. There is a more mature classic Sorceress-like character in the show but her name is Eldress. She resembles an older Teela and is voiced by the same voice actress, however (Kimberly Brooks) so perhaps there is a connection between the two? We'll have to see. Sorceress seemed to leak out at the end of last year but I didn't manage to get her until a week or two ago, and I imagine most of you haven't found her yet, either. Let's take a look at Teela as Sorceress after the break... 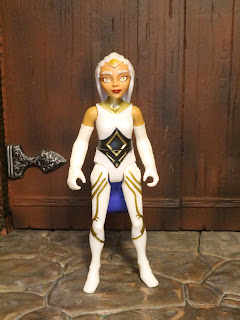 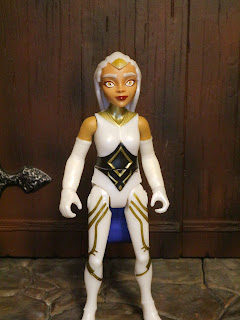 The Positives:
* Teela looks quite different from her classic depictions in this new series and her powered up form as Sorceress is even more different. Wearing a white suit with lots of metallic details on it with long, multicolored hair, she looks more like a sci-fi anime character than a traditional swords & sorcery character. While she's not the Teela I grew up with, she really does look pretty cool, focusing on the magical side of the character that most MOTU media has only alluded to. I'm digging the design and the figure matches the animated style of the show quite nicely with great colors. 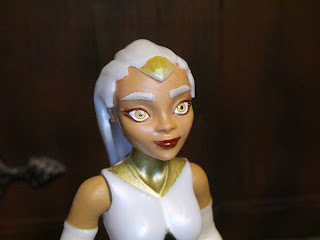 * The portrait on Sorceress is quite lovely. Good, clean paintwork and a simple yet stylized design. She has one of the better portraits I've seen in this line so far. 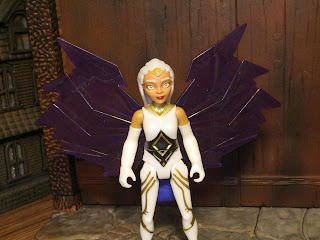 * Sorceress has some massive purple wings that look like they're made out of energy. They're translucent and speckled with glittery flecks in the plastic. They're removable but stay on securely when plugged into the back of the figure. 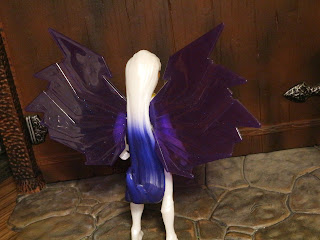 * Sorceress has some cool hair. It's a solid piece that's not too pliable, but it looks neat and hangs down her back. The colors are great and definitely liven things up a bit. 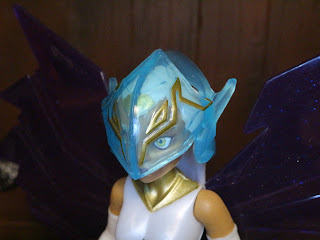 * In her Sorceress transformation Teela wears this cool helmet. The accessory is translucent with gold paint and looks really neat. Usually Teela has some sort of communications devices floating around her head but as the Sorceress she gets this. I like it. It fits on her well and you can see her face through it. Does it remind anyone else of Man-At-Arms' classic helmet? 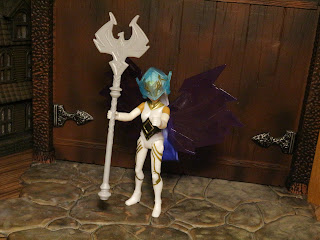 * This line isn't known for great articulation but the Sorceress moves pretty decently. She feels sturdy, can hold her staff in both hands, and her Power Attack waist allows her to swing her staff by twisting her waist left and right. 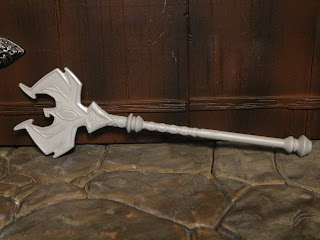 * The staff is great. It definitely looks like a more sci-fi version of the vintage Sorceress' staff. He-Man and the Masters of the Universe leans into the sci-fi side a bit more than most MOTU shows, though not as much as The New Adventures of He-Man, which I'll admit I kind of like. 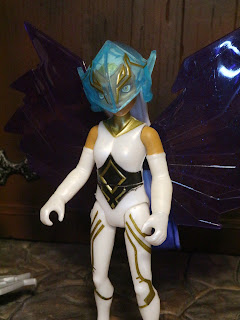 The Negatives:
* The Sorceress' costume is really cool but it's even cooler on the show. The black diamond in the middle actually is a cut out surrounded by a purple, starry material and the gold lines from her outfit extend across her shoulders. The paint applications have been one of the weaker parts of this line and while the figure does look cool it doesn't capture the outfit from the show as well as I'd like. 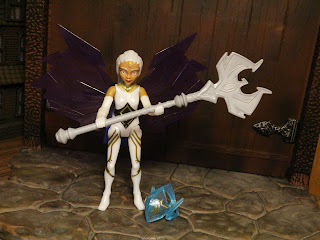 You know what? I really like this figure. These are clearly made for kids and definitely there are some shortcuts taken but I like the results here. Teela's Sorceress transformation is pretty unqiue looking in Masters of the Universe design and it's fun to see something so different. She kind of looks like something inspired by Gatchaman or something. She's a Great figure and a fun addition to the collection. I'm excited for the next season of the show and for more toys from it.
Are you a huge fan of Teela? Check out my archive of Teela reviews, Teela: Warrior Goddess, for a bunch of Teela goodies from across MOTU's 40 year history!
For more reviews from He-Man and the Masters of the Universe 2021 check out the following:
He-Man and the Masters of the Universe by Mattel (2021)
5.5 inch
Battle Cat
Chaos Snake Attack
Evil-Lyn
He-Man
He-Man and Ground Ripper
Man-At-Arms and Sky Sled
Skeletor
Skeletor and Panthor
Trap Jaw
8.5 inch
Battle Armor He-Man
He-Man
Man-At-Arms
Skeletor
Role Play
Power Sword
Posted by Barbecue17 at 3/02/2022