Minifigure Review: He-Man and Battle Cat from He-Man and the Masters of the Universe Eternia Minis by Mattel 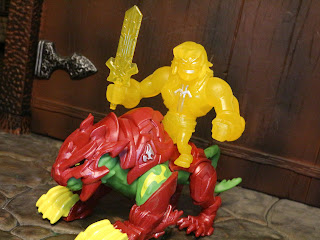 I really wish Mattel would continue releasing the classic styled Masters of the Universe Eternia Minis as there are still so many characters they have yet to make in that line. Through the end of last year and so far this year, however, a large part of Mattel's focus has been on products that tie in with the two new animated series that debuted on Netflix last year: Masters of the Universe: Revelation and He-Man and the Masters of the Universe. While Revelation received a fairly nice action figure selection as part of the Masterverse series, the MOTU: Revelation Eternia Minis line was rather small. This year Mattel has released a small subset of figures for He-Man and the Masters of the Universe, the kid targeted CG animated series. I haven't received my set of the three basic Eternia Minis yet but I did stumble upon both two-packs in stores a couple weeks pack. Today I'm going to take a look at the He-Man and Battle Cat two-pack. While Battle Cat is clearly a new sculpt I'm guessing that this He-Man is a color variant of the standard Netflix He-Man version. He's bright yellow! Mattel released a 5 1/2 inch action figure of He-Man in this bright yellow color scheme ("Powers of Grayskull" He-Man) which I own but neglected to review last year (it's this figure, but yellow). Ready to take a look at this set? Let's check it out after the break... 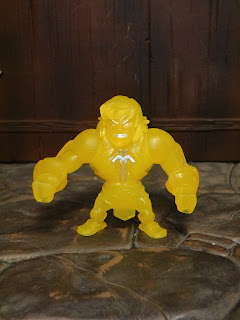 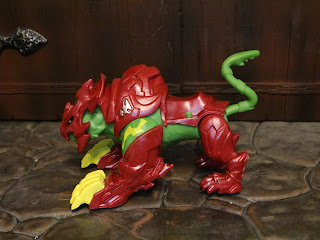 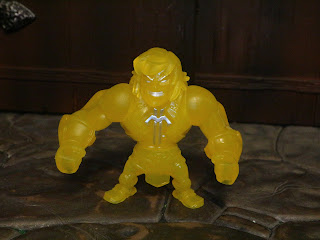 The Positives:
* So... this is a bright yellow He-Man. He's molded in a translucent yellow plastic with just a few silver details on him such as on his face and the Sword of Grayskull detail on his armor. It's hard to get a feel for the standard figure from this but the yellow is eye-catching. Glowing effects and such are kind of part of the show's aesthetic so this guy isn't as out there as it might seem. 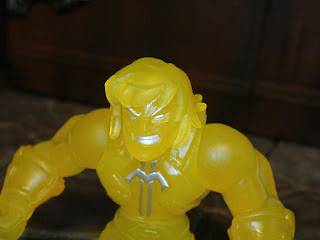 * The portrait looks pretty good. From what I can see, I might even like it better than the standard Eternia Minis He-Man portrait. The silver paint on the face at least makes this feel like an actual character rather than a statue or something. 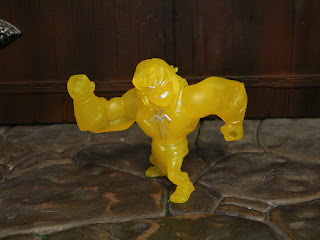 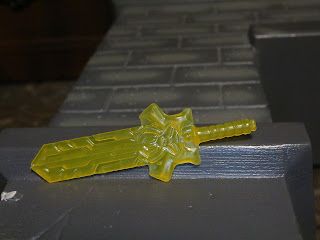 * He-Man comes toting the Power Sword from the Netflix series as well which is big and bulky, kind of like the 200x Power Sword. It's translucent, too, and it fits perfectly in either of He-Man's hands. 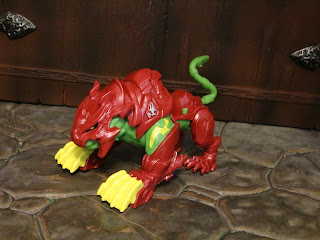 * I really like Battle Cat in the Netflix MOTU series and I'm really glad that Mattel included him here. It's strange they never did a classic Battle Cat in Eternia Minis though, right? He's a decent sized minifigure. Perhaps a bit undersized but this line's stylized so much it's not really that big of an issue. He looks cool decked out in some very sharp fantasy armor with a silver Grayskull logo on the side. 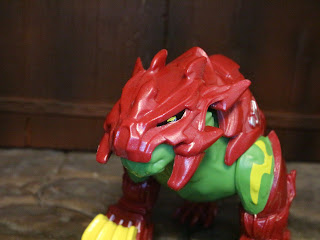 * The helmet isn't removable but it does seem to be a separate piece that is attached to Cringer's head. The only paint work is around his eyes but that detail is net and clean and makes him look pretty good. 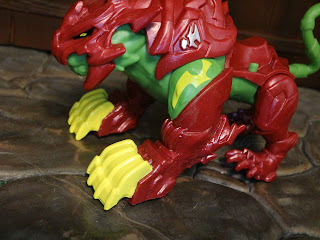 * Battle Cat is sporting some wicked cool claws, too. They glow yellow in the show just like the ones here. 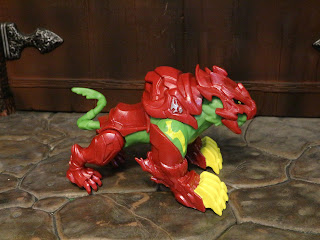 * While you can't get many poses out of him Battle Cat does have some articulation. His hips swivel, so you can kind of have him standing in different ways, and his tail rotates. It's enough to have some fun with the little guy and to give him a bit more expression on your shelf. 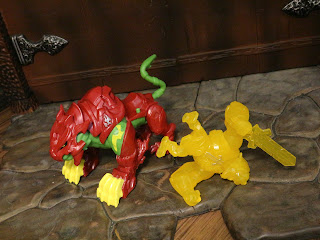 The Negatives:
* To keep He-Man on Battle Cat you simply plug his left foot onto the peg on the left side of Battle Cat's saddle and hope for the best. Sadly to say He-Man tends to tumble off pretty easily. The saddle needed to be a bit higher for He-Man to straddle for this work better. 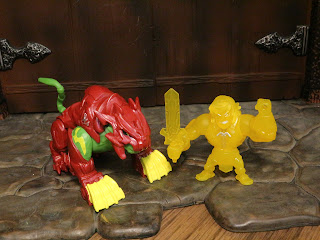 This isn't a bad set of Eternia Minis. I like the look of the funky powered up He-Man and Battle Cat is really cool. My only real complaint is how easily He-Man falls off of Battle Cat. If you're just sitting him on the shelf it'll be OK but if you try to move him around He-Man is going to tumble off, I think. This is a Good and a 1/2 set and for $10 there's a fair amount of value here. While I'd really like to see Mattel continue on with the classic characters they haven't made in this scale yet, at least this set adds Battle Cat to the roster.