Action Figure Review: Man-E-Faces from He-Man and the Masters of the Universe by Mattel 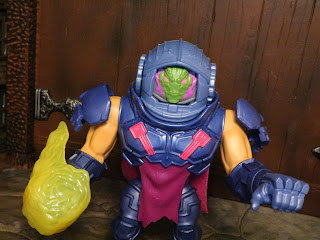 I haven't gotten the chance to watch any of the new episodes of the Netflix He-Man and the Masters of the Universe yet but I have found quite a few of the new figures recently. Man-E-Faces didn't appear in season 1 but shows up in season 2 voiced by Stephen Fry. I'm pretty excited to see his appearance. I still believe that Man-E-Faces is one of the greatest MOTU characters and vintage figures just because of how unusual and cool his action feature is. What a concept, right? This figure definitely has a different outfit but the colors are similar to the vintage toy and the action feature is still present. Ready to see how this human...robot...monster translated in this new line? Let's check him out after the break... 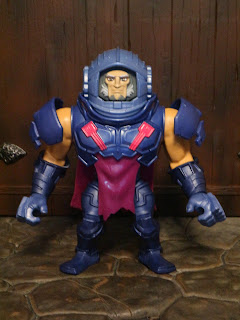 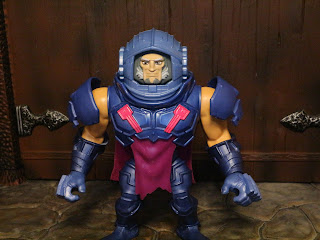 The Positives:
* Man-E-Faces is pretty big and bulky, closer in size to He-Man than most of the other Masters are in this series. While the original Man-E-faces was dressed like some sort of spaceman or miner, this guy's outfit that does seem to have some flourishes showing off his role as an actor. I'm assuming he's still an actor in this one, though who knows? The cape and drape in the front definitely seem very stylish. Also, I'm loving those shoulder pads. 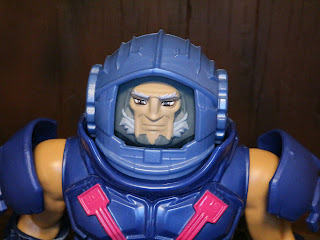 * Man-E-Faces is still wearing a dome shaped helmet to hide the mechanics of his face switching action feature. His standard face is pretty cool. He definitely looks like he's going to be a fun guy. Is that grayish-white hair hanging out the side? Is MEF sporting mutton chops? Groovy! 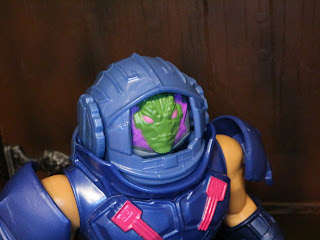 * The heads actually spin vertically rather than horizontally like every other Man-E-Faces figure previously released and you can see the knob on the left. The second portrait is the monster face. It's cool looking kind of lizard-like this time around. 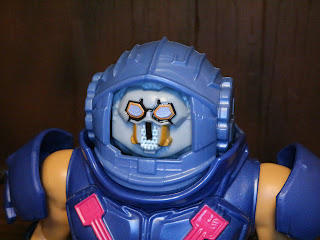 * The third portrait is my favorite! It's a really unusual but very cool robot face. The paint details on the face look really cool here. I love the copper highlights. 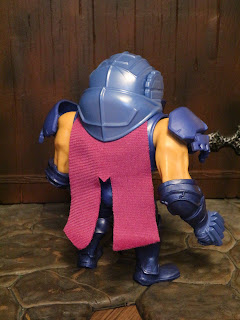 * Man-E-Faces is wearing an actual soft goods cape. it isn't removable but it looks pretty sweet and seems to be shaped like an M. For "Man-E-Faces I guess? 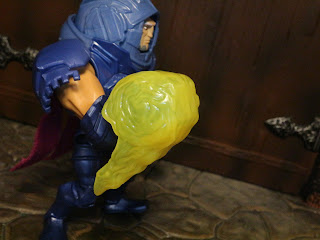 * Man-E-Faces doesn't come with a weapon. Instead, he has an energy effect that can fit over either of his hands. It's a simple, hollow piece of yellow plastic but I dig the way it looks on the figure. 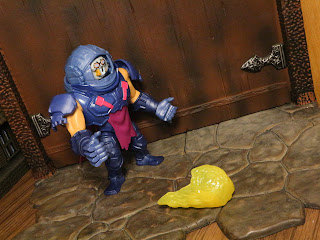 * If you pull Man-E-Faces back using the "Power Attack" torso (the balljointed mid-torso is a springy balljoint) you can have him "launch" the energy burst. It's kind of silly but also kind of fun. 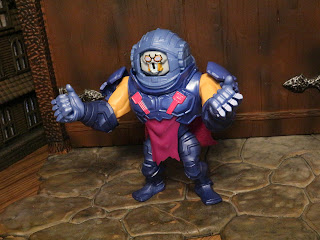 * Man-E-Faces is sturdy, his hands swivel to show off his cool armored gauntlets, and the Power Attack feature is pretty fun.
The Negatives:
* Unfortunately, Man-E-Faces doesn't have balljointed hips. They're standard swivel/ hinge his which, when paired with the swivel shoulders that are standard with this line, makes him fairly static. 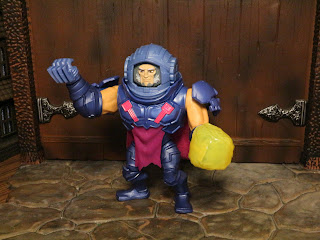 This is a very cool version of Man-E-Faces. If you're not a fan of this show or the style then you probably won't be too thrilled with most of this line but I think Man-E-Faces is just a really fun version of the character. With the "Power Attack" energy burst and the rotating faces, Man-E-Faces is pretty fun to mess around with. I wish he had his classic red blaster, but the little details on his costume like the swanky cape and the cool shoulder pads definitely make this a fun, new take on the character. He's a Great and a 1/2 figure and probably the best standard figure released in the line to date. Hopefully he's pretty cool in the show, too!