Action Figure Review: Anti-Eternia He-Man from Masters of the Universe Origins by Mattel 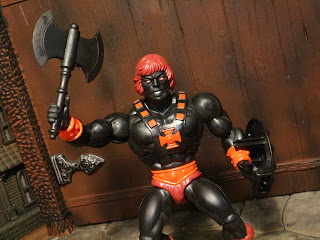 I received half of the newest series of Masters of the Universe Origins figures over the weekend and I'm going to try to review them as quickly as I can. First up is the variant figure for this series, Anti-Eternia He-Man. Mattel (and most toy companies, to be fair) love a good, straight up repaint of their main hero and MOTU is filled with them. Faker, Slime Pit/ Horde Zombie He-Man, and Anti-Eternia He-Man. This guy has gone from being a rather obscure character from a German audio play to being a variant figure that reliably shows up in toylines. Heck, DC's Masters of the Multiverse comic series cast this guy as the primary antagonist. Multiverses are all the rage these days, so he's living the high life, baby. Let's take a look at Anti-Eternia He-man after the break.... 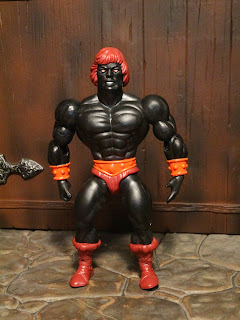 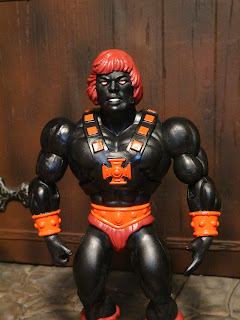 The Positives:
* Body-wise, Anti-Eternia He-Man is pretty basic. He's the standard He-Man figure molded in black with red and reddish-orange highlights. The harness is removable (it's the same as He-Man's) and the black and red color scheme looks pretty striking. This is a really interesting color variant that catches your eye. 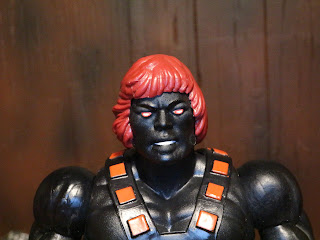 * Rather than the original head used on the Origins He-Man, Anti-Eternia He-Man uses the more recent vintage styled head. It looks pretty cool here with the Faker-ish red hair and the creepy eyes with no pupils. 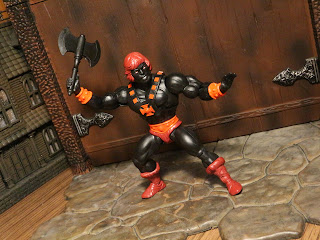 * The MOTU Origins line figures are built like the vintage toys but with more modern articulation. While their bulky frames make the articulation a bit clumsy, they do feel like an evolution of the vintage line. Imagine what you would get if you mixed a vintage figure with a MOTUC figure. They're quite fun to play with.
* They're also modular. and can be easily separated to make your own lazy boy customs! 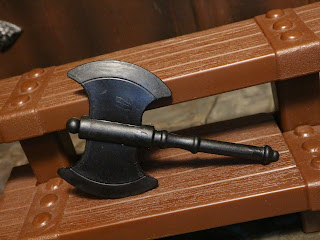 * Anti-Eternia comes with the three standard He-Man weapons though now they're molded in black. First up is the minicomic styled axe. 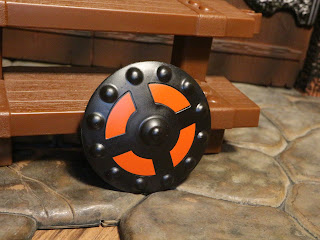 * Second up is the shield. We've seen this sculpt before and it's still quite good,  though rather simple. The paint applications on the red insets are clean and it works like the vintage shield with a handle inside and a clip for He-Man's wrist. 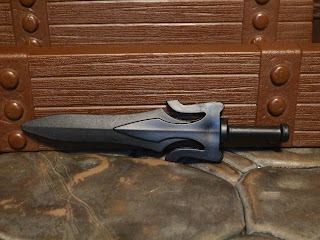 * Last up is the minicomic inspired Power-Sword molded in black. I like this sculpt and it looks pretty cool with the figure. Kind of makes me want a Wun-Dar figure, too. 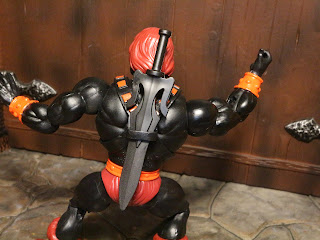 * When Anti-Eternia He-Man needs to stow away his sword he can fit it right into the loop on the back of is harness. 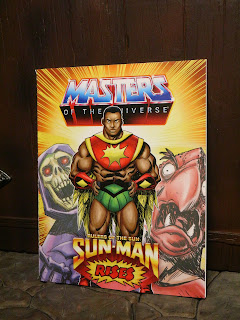 * I'm never going to turn down a minicomic and I love that Mattel brought them back. This one looks cool as it introduced Sun-Man into Masters of the Universe but what the heck is going on with Clawful on the cover? He looks like a bird or something! There's just way too much going on here for 6 pages. Anti-Eternia He-Man shows up to beat down Skeletor and Clawful and then Sun-Man shows up to defeat him. There are Horde Troops randomly running around, too, and He-Man and Sun-Man never even exchange dialogue. Sun-Man deserves better! 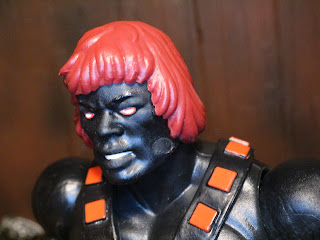 The Negatives:
* Check out the left side of Anti-Eternia He-Man's cheek: He's sporting a big anti-quality control blemish. 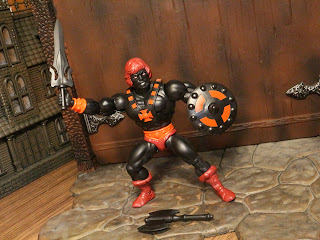 Anti-Eternia He-Man turned out to be a really cool figure. Yeah, he's a He-Man repaint, but he's a really cool He-Man repaint. Great color scheme, lots of cool accessories, and fun toy. Not much to complain about here. Yeah, mine has a little blemish, but it's doubtful yours well. This is a Great Masters of the Universe Origins figure and it gives me confidence that the latest series to going to be a really good one. Sun-Man is new, the Horde Trooper is an excellent figure who only has appeared in an exclusive set in different colors, and we've got Clawful coming up. Who will be the star of the series?