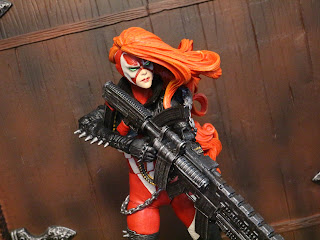 I've been selectively picking up new figures from Todd McFarlane's Spawn line here and there and recently I decided to pick up She-Spawn. I will openly admit that I haven't read any of the newer Spawn stuff yet (I'm making my way through the compendiums, so I'm in the #60s), so everything I know about Jessica Priest as She-Spawn is from stuff I've read online. I certainly remember the vintage She-Spawn coming out in series 4 in 1996, though I'm not sure she really appeared in the comics, right? There is a character named Nyx but I'm not sure those figures were really based on her. A lot of the McFarlane Toys stuff was just designed to look cool. Jessica Priest was also introduced in the movie and it's accompanying toyline (as a replacement for Rob Liefeld's Chapel) and quickly entered the comics as a retcon of the true killer of Al Simmons. Anyways, this version of Jessica Priest as She-Spawn is based on the events of Spawn #300 and depcits Jessica Priest as a Hellspawn who has apparently now teamed up with Al Simmons/ Spawn. I just thought she was a really cool looking figure with some massive guns. Seriously, her arsenal is unreal in the most awesomely 90s way possible. Let's check out She-Spawn after the break... 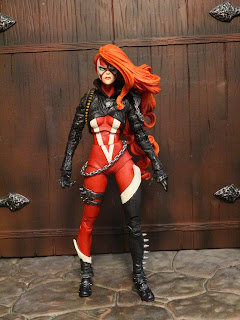 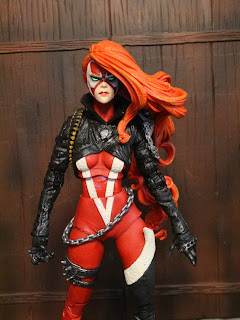 The Positives:
* Jessica Priest as She-Spawn looks very different from the older toy versions of She-Spawn. Her looks is a bit more superhero inspired and a bit less traditional Spawn, though she still has plenty of chains, spikes, and skulls. She's wearing a red, form-fitting body suit with some white details on the torso and it's partially covered by a black leather jacket with a skull clasp. She's got a bandolier of ammunition on her right shoulder, a (rubber) chain around her hips, and lots of nice textures on the different parts of her outfit. She really looks pretty cool. I just watched Shartimus Prime's interview with Todd McFarlane and while I know Todd's remarks about boys not wanting female action figures haven't been well received by all, he still clearly puts a ton of effort into these figures. Considering She-Spawn gets a completely new sculpt with so much detail, it's a testament to quality of McFarlane's work. 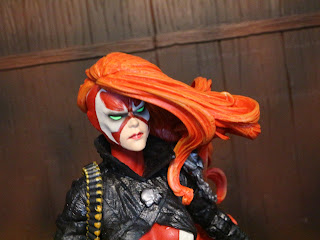 * About 2/3rds of She-Spawn's face is covered by a red and white mask, similar to Spawn's, but the lower third of Jessica Priest's mask is exposed to reveal her nose and mouth. It's a great sculpt though it's mostly overshadowed by her amazing hair. Are we going to talk about her magnificent hair? You bet we are. 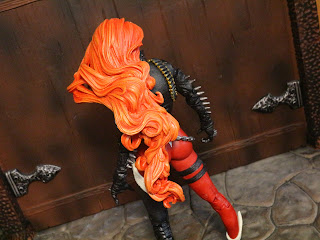 * Jessica Priest's hair is fantastic. It sits a little high on her head and runs down her back to about her thighs. It's wavy with very noticeable detail in the sculpt and some nice, subtle paint effects to bring out the detail. Fantastic work here, folks. 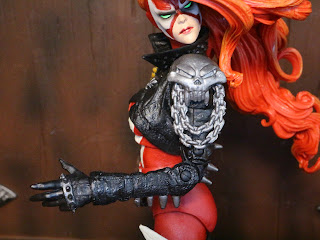 * Be careful! Jessica Priest's costume is pointy and pokey with lots of spikes. Seriously, they're way pointier and sharper than anything you'd find in the standard toy aisle. The skull shoulder pad is really cool too. Functional? Probably not, really. Awesome. You bet. 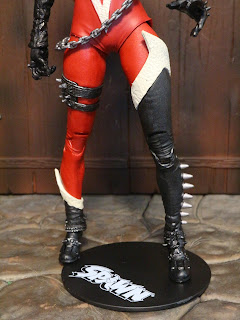 * She-Spawn is rocking some asymmetrical boots (long a McFarlane staple) and even more spikes. She's got a spiked collar on her right thigh and a seriously long thigh high boot on her left. Nifty. 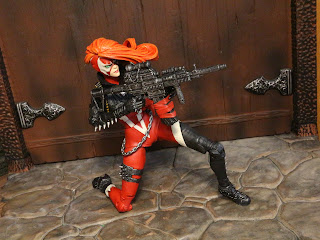 * One of the biggest changes of the new Spawn line is that the articulation is really good overall. Each figure is built very uniquely and seems to have their own articulation model. The plastic has a really good feel to it and doesn't feel at all brittle or flimsy. I only own one of the DC Multiverse figure from McFarlane but I believe they feel rather similar. She's Spawn's articulation blends in with her sculpt rather nicely and gives her a very fluid appearance. She's quite mobile and looks great holding all of her accessories, especially her massive rifles. She can take some excellent firing poses. 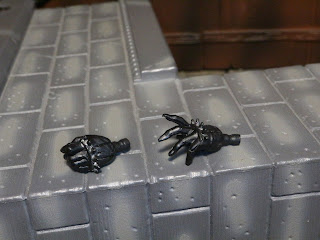 * She-Spawn comes with two left hands you can swap in and out. It's a pain (literally) due to the spikes but they swap in and out OK. One is a standard grip and the other is more of a cradling hand for holding the various rifles. 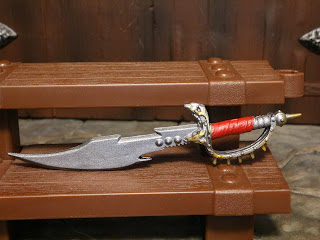 * She-Spawn comes with some really cool weapons and first we'll check out this sword. It's a pretty cool weapon with a wicked looking blade, spikes on the knuckle guard, and a skull cracking spike on the bottom. There's a lot of neat detail on the hilt and the paintwork is impressive. 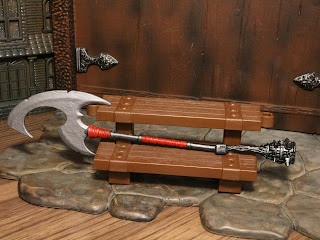 * Next up is a giant...spear axe thing? I have no idea what you'd call something like this. Metal. Epic? Who knows. It's taller than her, though, at 8 3/4ths inches. The blade is elaborate as is the base. It has what looks like a spiked mace on the bottom, sort of like a pugil stick designed to maim. There's even some sort of electronics box on there with wires, so maybe there's some extra features hidden away inside the device? 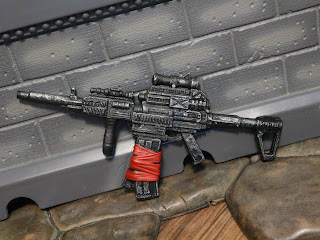 * Let's get into the firearms, now, because that's where this set delivers some absolute 90's style awesomeness. First up is a rather standard assault rifle, so far as McFarlane styled assault rifles go. It's insanely detailed with lots of crazy stuff like a foregrip, a top mounted scope, and an extra magazine tethered to the active magazine with a piece of red cloth. McFarlane styled weapons just have their own feel as they look incredibly detailed with elements of real world firearms without actually looking like anything specific. 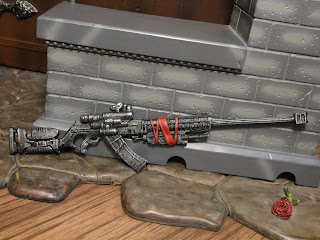 * Next up is a really long sniper rifle. At 7 1/4ths inches it's as tall as Jessica! Again, you'll see elements of real world weapons here (maybe bits of a Dragunov) but the idea is just to look cool. Three side mounted scopes? Yup. An absolutely massive magazine. Indeed. Some sort of barrel mounted under the main barrel? Why not? There's some cool, more realistic stuff here, too, like the elaborate stock and the muzzle break, but this thing overall is pure 1990s goodness. 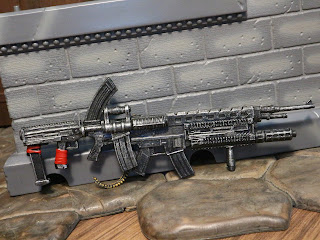 * The final weapon is an oversized assemblage styled assault rifle. This monstrosity comes directly from the comic art of She-Spawn and looks like it's assembled out of no less than six different firearms melded together. I see four different magazines and an ammo belt, four different grips and triggers, two foregrips, a handle, and maybe four or five barrels. How would this even work? Who cares. It looks pretty crazy cool and definitely matches the McFarlane style of art. McFarlane can do realism and accuracy when needed but this piece is here just to look cool. 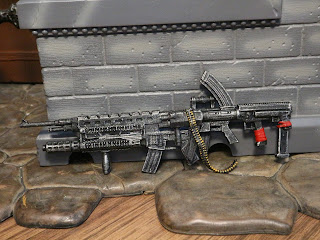 * Here's a look at the other side of this incredibly detailed weapon. I love the little pistol tied on the back. Sure, why not, right? I guess if all of the other magazines run dry it's a weapon of last resort. 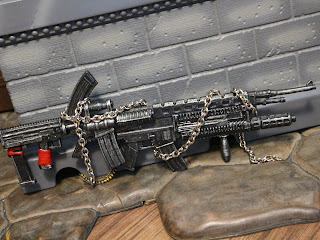 * She-Spawn also comes with a length of metal chain that is intended to be wrapped around one of her weapons. It looks great wrapped around the massively crazy amalgamation of firearms, especially because there are so many places the chain can wrap around. 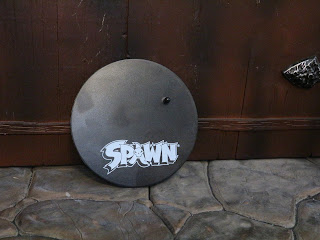 * McFarlane has been including a simple plastic disk stand with all of the Spawn figures and you probably need it with She-Spawn. Because of the heels on her boots she can be difficult to keep standing in certain poses, so this simple stand really helps. 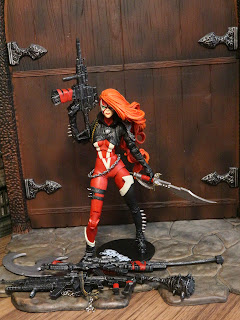 I'm really impressed with She-Spawn. She's sold as a deluxe figure which off the bat might seem a bit strange she's a regular sized Spawn figure rather than a massive character like the Violator or Cygor, but she does come with quite a few weapons. And these aren't puny little weapons, either. They're incredibly well sculpted and painted weapons, two of which are the same size or larger than Jessica Priest herself. She's really cool and tons of fun to mess around with. She-Spawn is an Epic figure who is well worth picking up if you're a fan of the character, the brand, or just love cool toys that are awesome in a 1990s comics sort of way. In the recent interview with the Toddfather that I mentioned above, you really get how much McFarlane loves doing things his own way. Spawn is a line that's just so different than most other lines these days but it's definitely resonating with fans.

For more reviews from the new Spawn line check out the following:
The Clown
Mandarin Spawn Deluxe