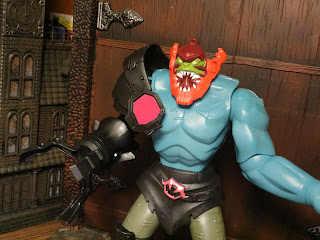 The newest series of 8 1/2 inch figures from Mattel's He-Man and the Masters of the Universe line inspired by the Netflix animated series includes Stratos (who I reviewed Wednesday) and Trap Jaw. Trap Jaw was already released in the 5 1/2 inch series last year but not he's bigger and badder than before. This series of figures definitely seems geared towards younger kids and I'm guessing lots of collectors are simply skipping them. That's probably a safe bet for most collectors as the designs are so similar to the 5 1/2 inch line. Still, some fans dig this kind of stuff, so let's check out Trap Jaw after the break... 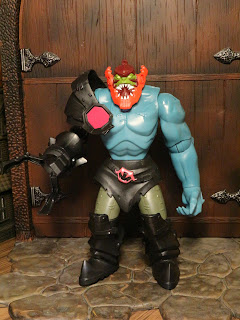 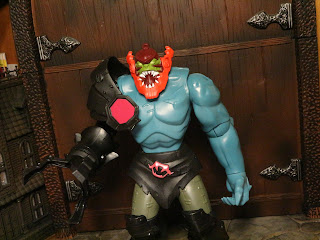 The Positives:
* Trap Jaw is one of the characters in this line that's easy to identify. While he's more stylized in a Dreamworks/ Pixar kind of way, he still has the major Trap Jaw hallmarks (helmet, jaw, big mechanical arm) and his colors are pretty recognizable. These are very stylized but there are some cool details like the different scars on Trap Jaw's torso and the painted snake logo on his belt. 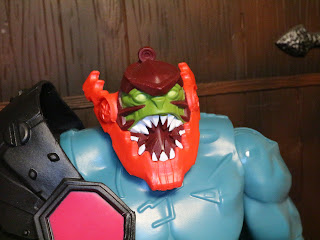 * The headsculpt is really good here. It definitely matches the animation well and shows off Trap Jaw's freaky mouth. Yikes! 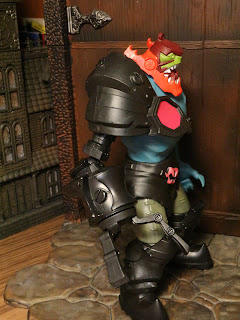 * Not only does his mechanical arm look cool here but it has elbow articulation, too. It's all one color but the detail isn't bad (again, looking at how simply styled this line is) and it does make for a fun addition to the toy. A robotic arm is always much cooler than a regular arm. 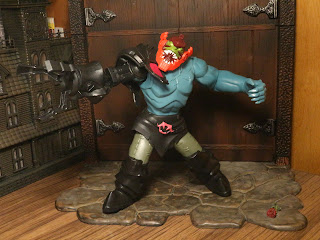 *  The 8.5 inch figures are built differently than the 5.5 inch figures with a better range of motion in the arms thanks to the swivel/hinge elbows and shoulders. Trap Jaw doesn't have the Power Attack feature of the smaller figures but instead has a standard swivel waist. He does feel sturdy and durable, though, and seems like he'd handle plenty of play. 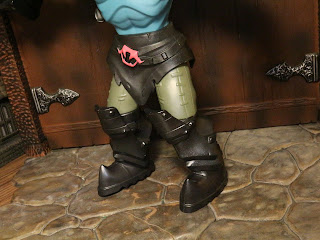 * Like the smaller versions of the Netflix inspired Trap Jaw this guy has the cool medieval styled boots and stitched pants. This really reminds me of the 200x version of Trap Jaw. 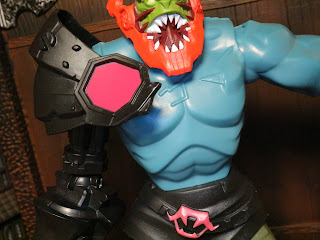 The Negatives:
* Trap Jaw's shoulder pad was warped right out of the package. I've tried to straighten it out some but it still looks pretty wonky. If you get a chance to grab this guy in stores definitely check to see if this piece is bent or not. It's very rubbery and having it flapping around just looks odd. 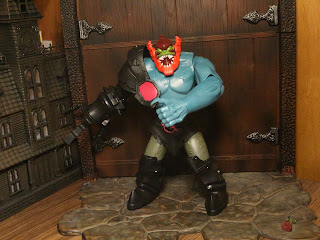 Trap Jaw isn't bad. These definitely aren't the most exciting Masters of the Universe toys ever but their larger size is kind of cool and they're priced pretty reasonable for being 8.5 inches and articulated. If you know a younger kid who likes the new show they might like these. Trap Jaw gets a Good and a 1/2 from me. He's kind of basic but he's fun. Not as much fun as the smaller 5.5 inch Trap Jaw, though. The smaller figures are still cooler than the larger guys.