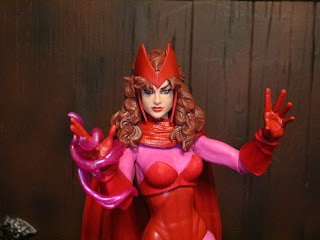 With the recent price jumps in Marvel Legends figures I've definitely found myself being much more selective in what I purchase. While I did preorder her for the $22.99 price point of last year's price hike, I imagine this updated version of the Scarlet Witch, AKA Wanda Maximoff, would have made it into my collection regardless. I missed out on the "Family Matters" set of Magneto, Scarlet Witch, and Quicksilver from a couple years back and while I've managed to acquire Magneto, Wanda and Pietro have been outside of my preferred price range. I've still been using the 2015 Marvel Legends: Infinite Series Scarlet Witch in my Avengers display but now I'm finally able to move her to my X-Men villains shelf and add this new and improved version of Wanda to the Avengers. She's part of the Marvel Legends Retro Collection line which features packaging based on the 1990 Toy Biz Marvel Superheroes line. I had a few of these as a kid to mix in with my X-Menand X-Force toys but it's interesting to note that Scarlet Witch never appeared in that series. Toy Biz didn't even release a Scarlet Witch until 1997's Avenger's toyline. Still, this is a fun line that's kind of a "greatest hits" line and since I prefer the classic looking Marvel figures the best it's a hit with me. Let's check out this new and improved version of Scarlet Witch after the break... 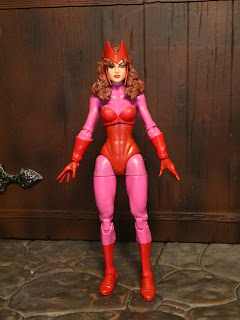 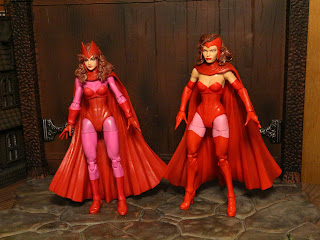 Comparison:
* This Retro Collection version of Scarlet Witch is on the left while the 2015 Marvel Legends: Infinite Series Scarlet Witch (Maidens of Might) is on the right. They actually share torsos, capes, hands, and I believe the upper legs as well. The headsculpts are different as are the arms and lower legs. The Retro Collection is a repaint of the Scarlet Witch from the "Family Matters" collection, which I don't own. 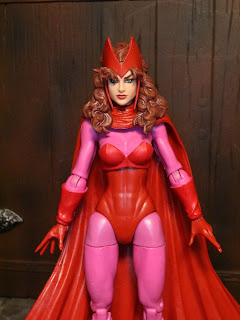 The Posiitves:
* This is a pretty good sculpt that is enhanced with a very classic looking paintjob. The red and pink outfit really pop and make Wanda one of the standout figures on your shelf. It's amazing how different she looks from the previous releases with a color change and a few new parts. Everything bends together quite nicely. 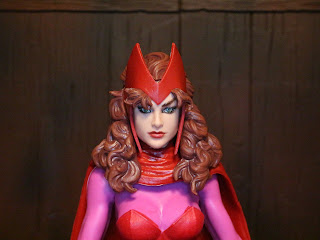 * This headsculpt is a huge improvement over the 2015 version. Her face is much prettier and her headpiece looks fantastic. The paintwork is really neat, especially on her eyes. I like her auburn hair more than the brown hair of the previous releases, too. 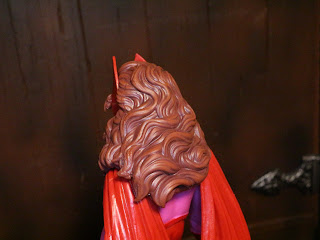 * Seriously, Scarlet Witch's hair looks really nice. There's a lot of detail here and it looks fabulous, even from the back. 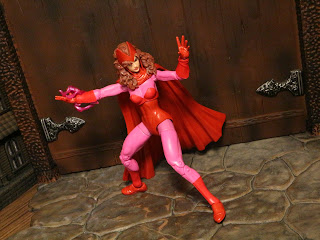 * While there are definitely some older parts on this figure overall it still feels pretty modern thanks to the sturdiness of the plastic and the newer elements like the arms and lower legs. Wanda is nicely articulated and looks great in a variety of poses. If you've  picked up a comic styled Marvel Legends female in the past 5 years or so, you already know what to expect here. 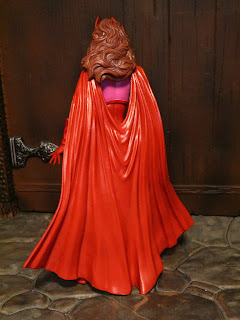 * The cape still looks good. I like how it hangs from her shoulders but low in the middle. It stays on securely and doesn't shift around thanks to how it rests over her neck. it's removable if you feel the need to have a capeless Wanda. 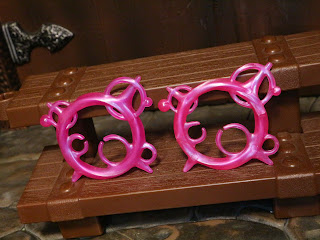 * The 2015 Scarlet Witch came with these same energy effects, as have at least a dozen other magic users and such. They're not brittle like the earliest versions of these accessories and they look much better molded in this pearlescent pink plastic. 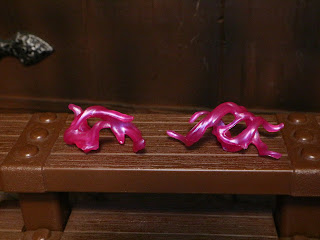 * To give her further powers Hasbro also threw in a set of these rubbery energy effects that fit over her wrists and hands. We've seen these with Scarlet Witch before, and I actually prefer them to the discs. 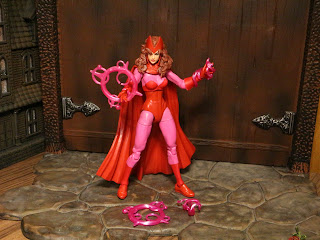