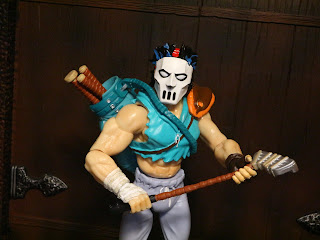 I was super into Teenage Mutant Ninja Turtles by 1989 and I still remember going to the store with my dad and finding some of the series 2 figures at a Venture. Remember those? Anyways, I can't remember who else I got on that trip (maybe Baxter Stockman and Leatherhead?) but I definitely picked up Casey Jones. He's always been one of my favorites, even before the 1990 film. Of course, the 1990 film just made him cooler. Back in 2020 I picked up series 1 of Super7's Teenage Mutant Ninja Turtles line and while I liked them, I ended up selling off most of series 1, only keeping Raphael. Recently I decided to get back into the line a little, only picking up a figure here and there. Casey Jones was one I just didn't want to miss so I snapped him up. These have been easier to come by from e-tailers than many of Super7's other Ultimates lines and it seems like they're doing reruns of the earlier figures, too. That's pretty cool. Basically every company on the planet is releasing Teenage Mutant Ninja Turtles figures right now but I'm really drawn to Super7's vintage toy accurate designs. They're big, bold, and colorful. Let's take a look at this vintage toy inspired Casey Jones after the break... 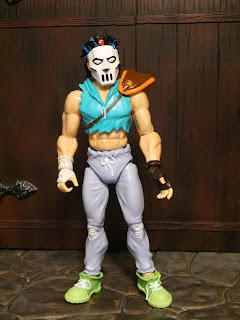 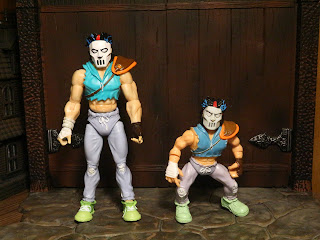 Comparison:
* Here's a quick shot of Super7's TMNT Ultimates Casey Jones with the vintage Playmates Casey Jones from 1989. Other than the proportions and scale being different, the figures are extremely similar detail wise. 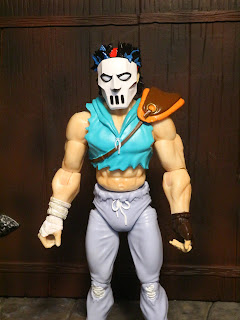 The Positives:
* I really like the look of this version of Casey Jones. He's pretty cool looking. While Casey Jones has definitely been given a lot more depth in the various films, comics, and animated shows he has appeared in, the original idea for the character was a guy who watched too many police shows and who decided to just go out with some sporting goods equipment and be a vigilante. He's a parody of the comic book vigilante character of the 1980s, but looking at him he's pretty modern, too. Bright sneakers, ill-fitting sweat clothes, and a mask? He looks like basically everyone over the past two years, doesn't he? Super7 has done a nice job of capturing the feel of the vintage toy while also modernizing the proportions a bit. He stands about a head taller than the turtles themselves. 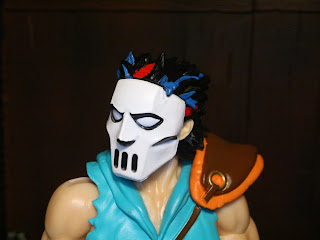 * The headsculpt on this is awesome. I love the really dark lines on the hockey mask, giving Casey an almost cel-shaded look. It's a really cool sculpt, especially the crazy hair. The blue lines are great, too, adding a very comic book inspired feel to it. 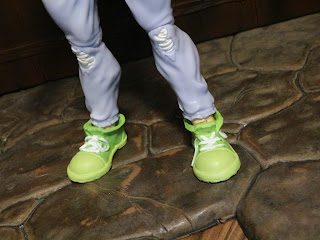 * I'm not a sneakerhead or anything but I can definitely appreciate some lime green tennis shoes. Groovy. 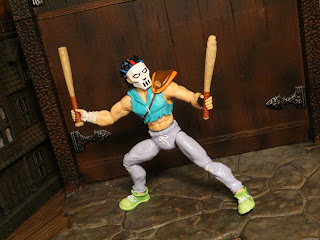 * The articulation on Casey Jones is very similar to the articulation on most other Super7 Ultimates, particularly the Foot Soldier from series 1, but it's much tighter, especially around the hips and knees which gave me trouble with some of the series 1 figures. The quality just feels better. The articulation on the Ultimates isn't as smooth as many other modern lines but it's solid and durable. 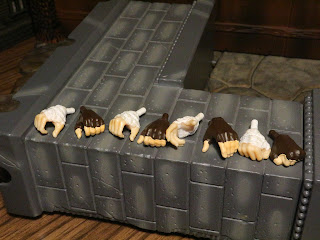 * Casey comes with eight interchangeable hands that swap in and out quite easily. There are two pair of differently sized grips for the different pieces of equipment, a pair of gesturing hands, and a pair of fists. 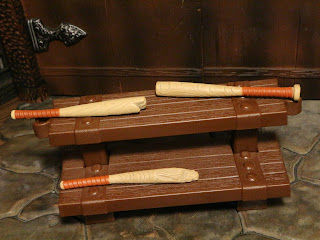 * So... does Casey Jones come with some stuff for bashing the baddies and fighting the Foot? You better believe it! First up, he comes with three baseball bats, one for each strike. There's a solid bat, one with a chipped end, and one that's missing a good chunk of the bat. They're fantastic with a rather realistic texture in the wood and some neat and clean paint applications. Does he come with three bats or is the same bat in different conditions? 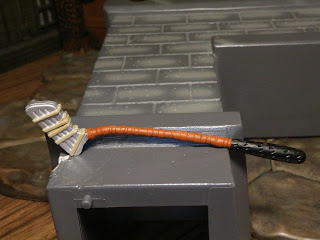 * Next up is a golf club. Again, solid paint, great sculpt, and another item the vintage figure came with. 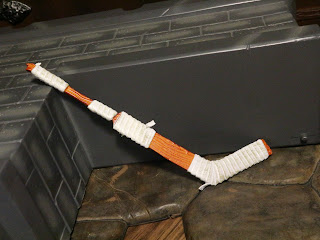 * Check out this goalie stick! The vintage toy didn't have one of these, so it's a cool new accessory that's perfectly fitting with the character. I mean, he's also used it plenty of other times, to, but it's new for a "vintage" version of Casey Jones. This is pretty slick with some really nicely done tape sculpted around the wooden stick. 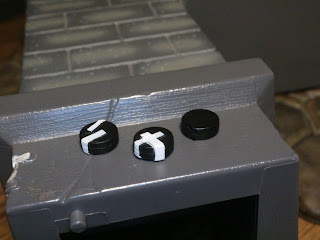 * To go with the hockey stick Super7 also threw in three hockey pucks. One is standard while the other two have various strands of tape on them. Do you think he chucks these at bad guys like the turtles toss throwing stars? 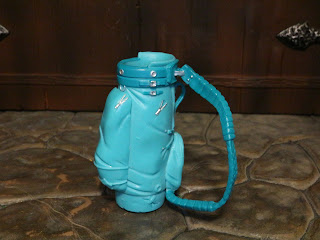 * To store some of his goodies Casey comes with a green gold bag. It's actually about the same size as the vintage accessory (a little smaller) and comes molded in more of a seafoam green rather than a basic green. The bag is hollow for holding gear (you can fit three or four things inside of it) and all of the zippers and such are given some silver paint hits. 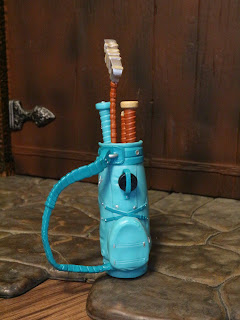 * Here's a shot of Casey's golf bag loaded up with three bats, a club, and a hockey puck. There's a little loop that the hockey put can fit in. Cool stuff. 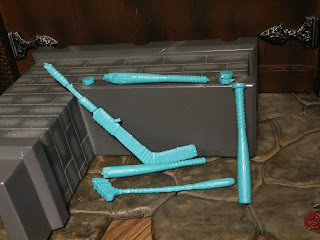 * While it seems that Super7 will be dropping the single colored weapons on the sprues in the future (only the earliest TMNT figures had them, anyways) Casey comes with an extra set of light green weapons. You get three more bats, another golf club, another hockey stick, and three more pucks. While I wasn't a huge fan of the single colored weapons in series one, I can definitely appreciate someone wanting to display Casey Jones with his traditional green accessories. 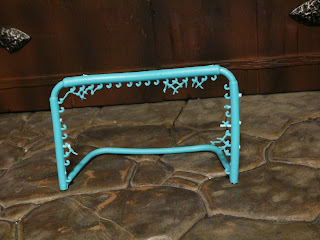 * Rather than having a weapon stand attached to the weapons, Casey Jones comes with a ripped up hockey goal. It's small but kind of cool nevertheless. 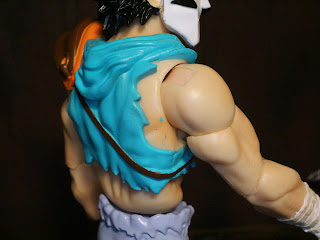 * Time for the penalties! First up is some paint slop on Casey's skin where the right sleeve is ripped away. 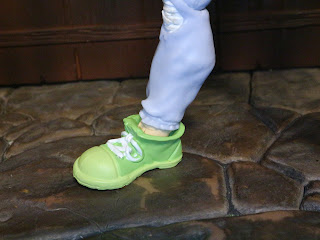 * Next up is some really limited ankle movement. It's tough sometimes to get Casey Jones' feet to stand firmly on the ground. The ankle movement it quite limited here. 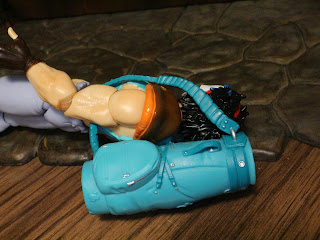 * Last up is Casey's bag. It's incredibly cool but it's tough to get it over his shoulder and head. To do so you really have to stretch the rubbery strap which I'm just not too comfortable with. His head isn't easily removable (and you'll need to use heat to get it back on), so that doesn't seem to be the intended manner of putting on the golf bag. the vintage one had a detachable strap. Why not use that here? 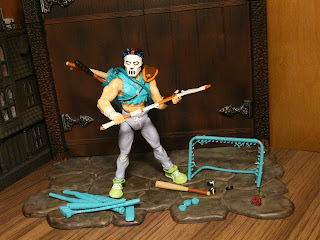 Super7's Ultimates figures definitely are one of the lines I'd consider a middle range priced product at around $45 or so a pop. They're slightly larger than your standard figure, though, and do come with a decent amount of stuff. I like Casey Jones' extras quite a bit as he comes loaded with plenty sporting goods weapons. He's a Great and a 1/2 figure that makes up for any of his minor flaws by looking fantastic and being incredibly fun. The next TMNT Ultimates I'm planning to pickup is probably Leatherhead but who knows? If I see someone else I like I might snag them, too.