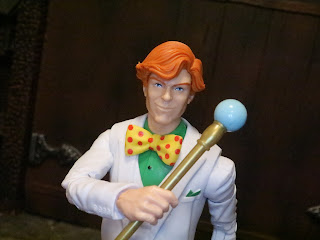 I'm back with another review from the Super Villains/ Xemnu series of Marvel Legends and this time it's Arcade! While Arcade has been plaguing the Marvel Universe since 1978 I remember him from the wicked cool artwork of the 1989 PC game X-Men: Madness in Murderworld (which I probably saw in some gaming magazines) and from the 1992  game Spider-Man and the X-Men in Arcades Revenge which I recall renting for SNES as a kid. While he's just a dweeby guy in a white suit Arcade really stands out and makes for a very cool figure in this series chock full of super villains. Arcade and his Murderworld have challenged many heroes over the years but I'll probably be placing him on a shelf with my X-Men villains as that just seems to be who he has battled with the most. Let's take a look at Arcade after the break... 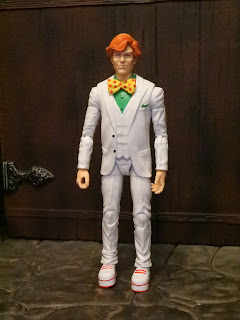 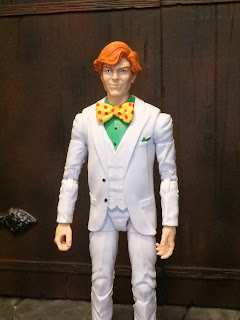 The Positives:
* While Arcade certainly dresses rather flamboyantly he doesn't necessarily look like a super villain. His bright white suit is complemented with vivid, almost tacky, colors such as a polka-dotted bow tie and a bright green shirt and pocket square. His suit is a separate (but non-removable) piece that sits over his torso. It all looks really good and while I'm sure there's quite  a bit of reuse here from previous suited figures but it all seems to fit Arcade perfectly. 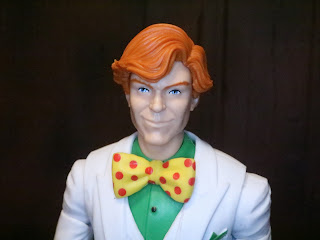 * While his outfit doesn't necessarily scream super villain his face sure does. This is really a fantastic sculpt and it shows how much attention Hasbro gives even to a B-list villain. The expression is just so obnoxious that you know your heroic Legends are just lining up to punch this guy who kind of reminds me of an evil version of Rick Astley. That bow tie is also worth pointing out again just because it's so groovy. It's a clip on, you know. 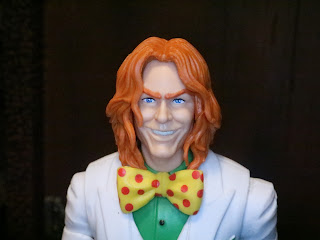 * Yikes! What the heck is wrong with Arcade?! He has a swappable portrait with longer, messier hair and a really intense look. This guy is definitely unhinged looking and has a very sinister and creepy grin. Check out those eyebrows! This guy's nuts! 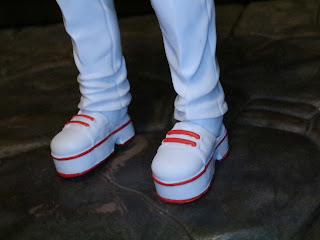 * Arcade's not supposed to be the tallest guy around so he's sporting some platform shoes to give him some extra height. They look pretty cool and add something else unique to the figure. 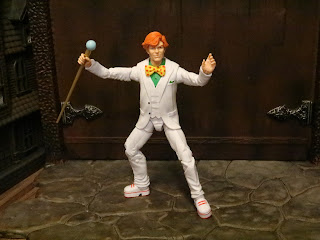 * The articulation is excellent on this guy. He's got all the joints you'd expect and even though his mid-torso hinge is hidden by the vest you can still utilize it a bit. He's durable and really fun to mess around with. Far more fun than I thought he'd be since he's a guy in a suit. Arcade is very Riddler-ish at times and it's fun to give him some expressive poses that bring out his character. 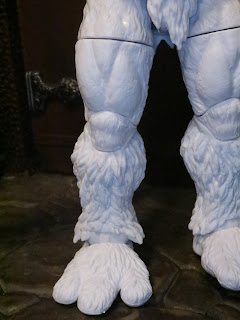 * Six of the seven figures in this series come with parts for the Xemnu build-a-figure (Dr. Doom is the figure without a piece) and Arcade comes with the right leg. After realizing I really wanted four of the figures in the set and was interested in Xemnu I decided to pick up everyone except Doom so I could  go ahead and complete him. If you're buying them all the BAF is a nice extra incentive. Otherwise, you can sell it and probably make a good percentage of your money back or trade it for something you need. 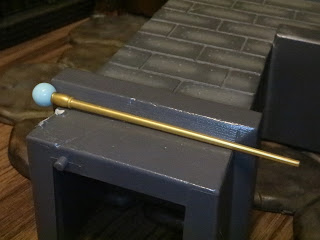 * Arcade's final extra is a staff for himself. It's gold with a blue top. Maybe he conceals some sort of gadgetry in there given that he's an inventor and technological genius? 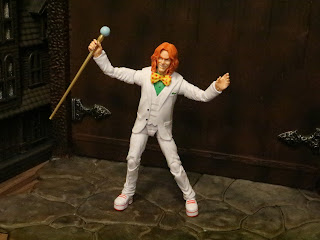 Arcade is definitely one of the standout figures in this series! He has a fantastic color scheme, two incredible portraits, and he's super fun to pose. I know lots of collectors joke about suited bodies being used over and over again but Hasbro did a nice job with Arcade. He's also a character who I believe has never had an action figure made in his likeness before. He's a Great and a 1/2 figure and definitely worth picking up. So far he's my favorite figure in the series and I think he'll be rather tough to beat. Who could be next in this series of Super Villains? Stay tuned and you'll see...