Action Figure Review: Evil-Lyn from Masterverse/ Masters of the Universe: Revelation by Mattel 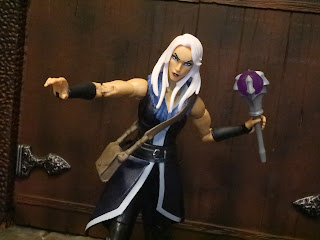 The release of Masters of the Universe: Revelation on Netflix is almost here and I am absolutely thrilled! I'm also pretty excited that Mattel actually managed to get the figures out in time for the show. I didn't have a hard time at all finding the first series of Masterverse figures and since it seems like they're reliably popping up in large display bunkers at Walmarts I'm guessing lots of you are having success as well. I'm super excited that MOTU:Revelation seems like it will do some pretty exciting things with the property while still being a semi-transitional MOTU show. While some of the characters look very traditional (He-Man and Battle Cat) others are getting some different looks that seem to signify new roles and directions for them. Today I'm checking out Evil-Lyn and of the four basic figures in the first series of figures I think she's the least traditional looking. I've tried to keep myself fairly in the dark about most story elements of the new show but I'm speculating that at some point Skeletor becomes so powerful that Evil-Lyn turns against him or attempts to usurp his power. It's a look for Evil-Lyn that retains some of her classic design elements while also offering up something new. Let's take a look at the Masterverse Evil-Lyn after the break... 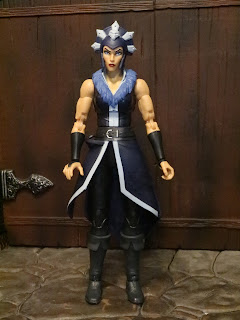 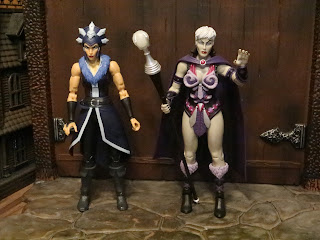 * Here's a quick comparison of the Revelation Evil-Lyn (left) with the Battleground Evil-Lyn variant from Masters of the Universe Classics. The size isn't as different as I thought it would be although the Masterverse Evil-Lyn is definitely thinner with more angular features. If you wanted to display this version of Evil-Lyn with your MOTUC figures (maybe as the Evil-Lyn during the He-Ro, son of He-Man era?) I don't think she'd look too out of place. 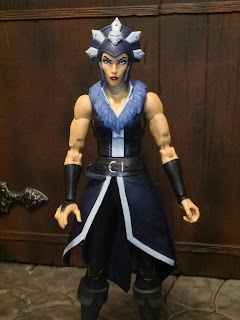 *Rather than wearing her traditional one piece or the gothic dress of the 200x figure this version of Evil-Lyn is sporting what seems like more of a traveling outfit. Clad in dark blues and greys Evil-Lyn seems more subdued and perhaps a bit more serious. That's not a knock on her traditional costume in any way, but this outfit definitely seems to convey a different attitude for the character. The sculpt and paintwork on Evil-Lyn's outfit is all quite neat and clean and there are quite a few more details on the outfit than you might expect at first. Also, I should mention Evil-Lyn's skin: It's not as yellow as the vintage toy but it's still yellow, more in-line with the Filmation version of the character. 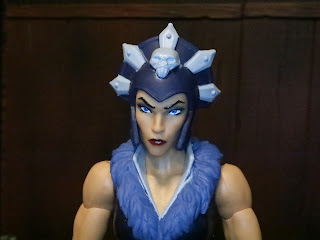 * Evil-Lyn comes with two heads, the first of which is a very classic head. She's wearing a spiky looking helmet with an elaborate headpiece which is very classic. The helmet actually looks to be a separate piece, though, and Evil-Lyn's face is perfect. Still lovely but vert severe with strong, angular features. The paint on her eyes is excellent and really makes her quite intimidating. 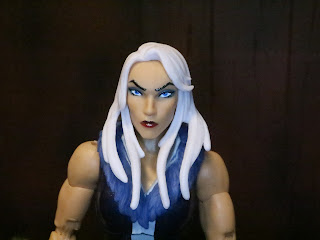 * The second portrait is actually my preferred of the two as it shows an un-helmeted Evil-Lyn with long, white hair. I love this look for her! I've never been a huge fan of Evil-Lyn having short hair (as depicted in the Filmation series) so this one absolutely does it for me. She looks fantastic, right? The heads swap really easily, too, so changing up portraits is a breeze! 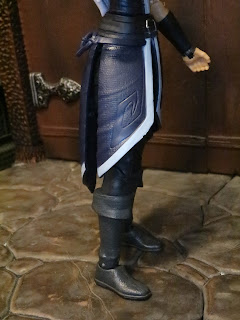 * There are some really cool details on Evil-Lyn's outfit and in particular I want to point out the cool loop on her robes, the sculpted in detail on the robes, and her really cool leather boots. The texture on the boots is great. 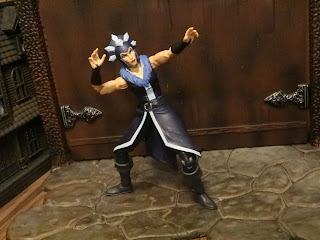 * While not every joint is as perfect you might expect from a modern 6-7 inch figure Evil-Lyn made out pretty well. She has a fantastic range of joints, most of which have an excellent range of motion. You can really have fun posing her in all sorts of spell casting poses. Her robe is also nice and pliable and has two long slits in the sides to ensure a full range of leg motion. 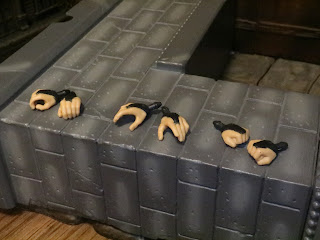 * Mattel really seems to be putting some effort towards making Masterverse a solid toyline and the accessories included with some of these figures are definitely a draw. Evil-Lyn comes with six hands: Two gripping hands, two gesturing hands, and two fists. They swap in and out well and she looks perfect with them. My favorites are the gesturing hands as they're great for spell casting! 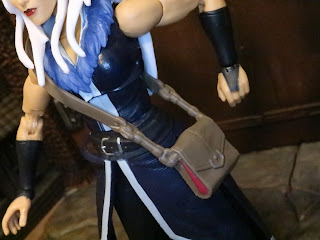 * Evil-Lyn's outfit is complemented by a brown satchel that's carrying some mysterious red object inside. What is it? Who knows! The satchel fits around either shoulder and really completes her look. 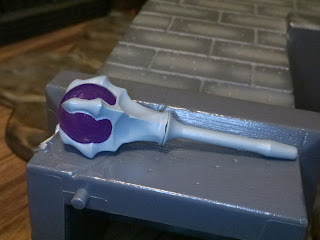 * Evil-Lyn comes with two magic staffs, both of which seem heavily inspired by her Filmation staff. The first one is a short wand, similar to the wand included with the vintage toy. The bony claws holding the translucent purple orb in place look pretty spooky! 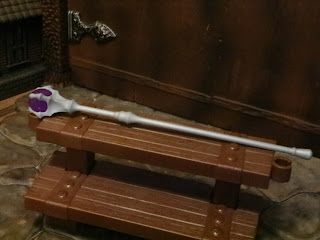 * The second staff is a full sized magical staff like the 200x cartoon version of Evil-Lyn. Since they look so similar I'm curious if Evil-Lyn will be able to change the size of her wand at will in the new show. That could be a pretty cool feature! 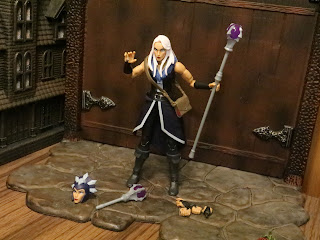 So far Evil-Lyn is hands down the best figure in the series that I've reviewed. She really is a fantastic looking toy and one of the best collector targeted figures that Mattel has put out. An interesting new costume, two fantastic portraits, multiple hands, cool accessories, and useful, well designed articulation. The Masterverse: Revelation Evil-Lyn is Epic and she's definitely the figure I'd recommend the most. I should be reviewing some of the other series one figures here shortly so stay tuned for those reviews. Don't bother me tonight around midnight, though. I've got plans!
If you're a fan of Evil-Lyn I've also reviewed the Masters of the Universe Classics Evil-Lyn, the M.U.S.C.L.E. Evil-Lyn from the Masters of the Universe green boxed set, Tweeterhead's Evil-Lyn bust, the ReAction Evil-Lyn, the Eternia Minis Evil-Lyn, Super7's neo-vintage Evil-Lyn, the Monogram International Evil-Lyn bag clip, the standard Evil-Lyn POP! + Pez dispenser and the Evil-Lyn (Metallic) POP! + Pez Dispenser, the Rock Candy Evil-Lyn, the MOTU Origins Evil-Lyn, the Mega Construx Evil-Lyn and Evil-Lyn (series 2)and Mega Construx Heroes Evil-Lyn.
For more Masterverse reviews check out the following:
Masters of the Universe: Revelation
Battle Cat
Skelegod