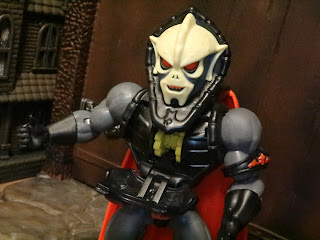 Buzz-Saw Hordak was released in 1987 as the third and final Hordak figure released in the vintage line. While he has a cool gimmick I've always found it kind of odd that Buzz-Saw Hordak didn't really look any different from regular Hordak. At a glance he's the exact same figure. That's the direction that the Masters of the Universe Origins version of "Buzz Saw" Hordak has gone in as well: He's very similar to the standard Hordak from the fourth series of figures but with a new torso and some new heads. "Buzz Saw" Hordak is one of the deluxe MOTU Origins figures which was definitely the right way to release him. Not only have the deluxe figures included lots of extra pieces and alternate heads but the figures also mostly have functioning action features. That's pretty cool! And, yes, it means "Buzz Saw" can actually launch saw blades from his chest. Let's jump in and see what all of the....buzz...is about after the break... 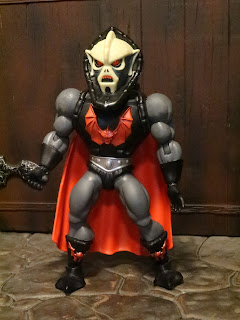 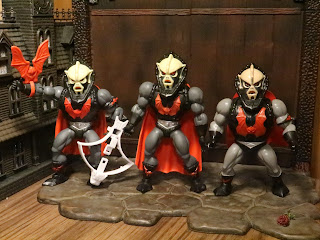 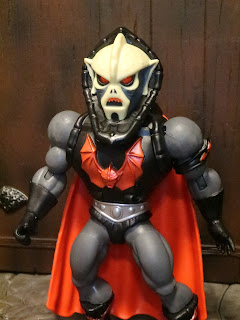 The Positives:
* At a glance there's not a huge visual difference between "Buzz Saw" Hordak and the standard version but if you pay closer attention you'll notice a few differences. The torso is a different piece that contains the housing for the launching buzz saw feature while the paint colors on the bat logos are all more of a metallic red color which I think is a nice improvement. 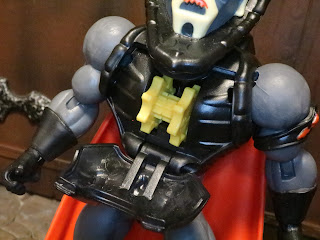 * Since this is a deluxe figure Hordak's buzz saw actually launches from his chest! Pull down the chest flap, place either of the two included saw blades in his chest cavity, and pull down on the level that holds his cape and the saw blade will go flying. This thing is no joke! It shoots hard, fast, and far! 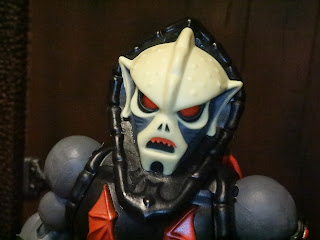 * Hordak's first headsculpt is the same as the standard figure but it's so much better! The colors are better and the eyes are both fully painted red (not little dots like the previous release) and have black eyeliner that just makes them really pop. This is an excellent vintage Hordak head! 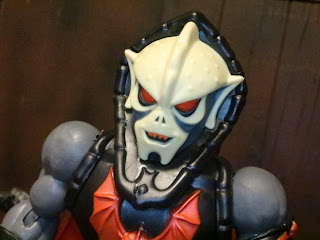 * The smiling Hordak head is a bit off-putting just because Hordak's not usually known for smiling but it does feel like it would fit a more Filmation inspired Hordak. I do like it and it's fun that each of the deluxe figures comes with an alternate portrait. Most of these portraits have been better than those from the series Origins figures so you can go back and spruce those guys up a bit if you'd like. 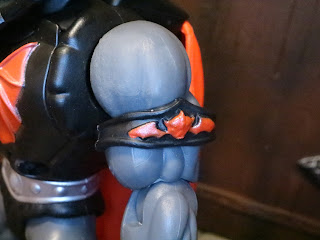 *  Hordak still has his distinctive Horde armband. It's a removable piece that easily slips over his bicep. It stays in place quite nicely, too. 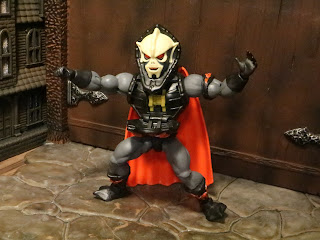 * The MOTU Origins figures are built like the vintage toys but with modern articulation. While their bulky frames make the articulation a bit clumsy, they do feel like an evolution of the vintage line. Imagine what you would get if you mixed a vintage figure with a MOTUC figure. They're quite fun to play with.
* They're also modular. Like the Masters of the WWE universe figures, these can be easily separated to make your own lazy boy customs! 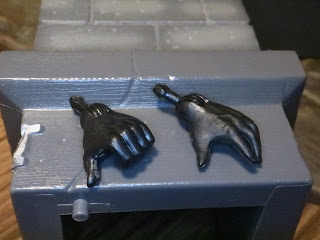 * Hordak comes with two interchangeable left hands, a feature most of the deluxe figures seem to have. If you want a figure closer to the vintage figure then you can use the open palmed left hand. If you want Hordak to be able to wield sme extra weapons (which aren't included here) then use the grip. It's not a big thing but it's a welcome feature that makes the figure just a bit more versatile. 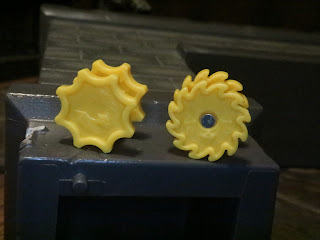 * Hordak doesn't just come with one buzz saw; he gets two! Both have a Horde emblem on the side because Hordak is all about that branding. One has a more traditional saw blade while the other looks more like a cog of sorts. 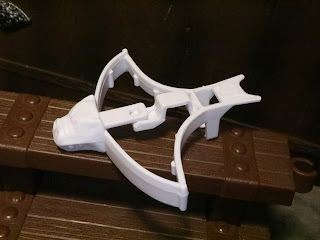 * Hordak again comes with his crossbow which was the primary weapon of most of the vintage Horde figures. I've never really cared for these until the Four Horsemen redesigned them in the NECA stactions and MOTUC lines but considering this is supposed to be an update of the vintage toy I'll say that Mattel did a good job of capturing the function and appearance of Hordak's vintage white crossbow. It "fires" too, just like the vintage toy. That was always a weird feature to me. 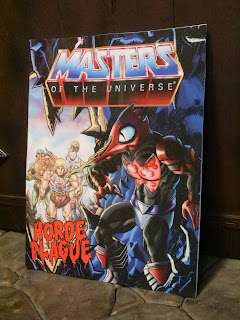 * Hordak comes with a new minicomic, "Horde Plague." It features Mosquitor who is coming soon as a deluxe release. With Grizzlor, Mosquitor, and Horde Troopers on the way it seems like we'll be able to start building a decent MOTU origins Horde. 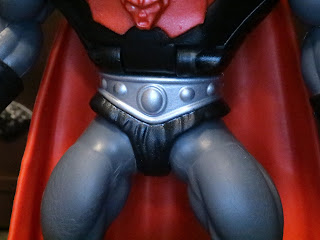 The Negatives:
*Besides the action feature the biggest difference between the vintage Buzz-Saw Hordak and the original Hordak was his belt. Buzz-Saw Hordak had a belt with a diamond shaped design rather than the standard waist but Mattel didn't capture that here. It's something that stands out and makes the variant feel a little different so it's kind of a bummer they neglected it. They neglected it on the MOTUC figure as well. 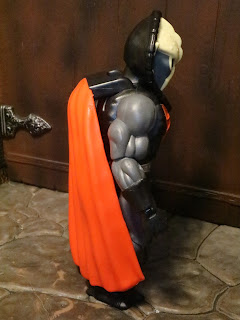 * Because of the lever that launches the projectiles from Hordak's chest Hordak's cape juts out at a really weird angle. The action feature is cool here but surely there could have been a slightly better way to engineer this piece, right? 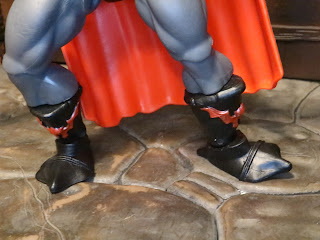 * The boot swivels on Hordak are kind of wobbly and tend to spin around a bit when you're handling the figure. 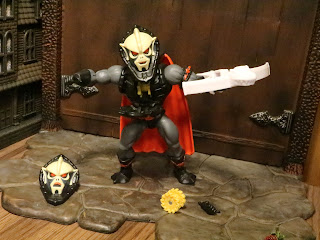 Masters of the Universe Origins might be targeted towards middle-aged collectors who fondly remember the original line (and who have the disposable income for wildly overpriced convention sets) but they really do feel like toys rather than your usual collector targeted figures. That's both a positive and a negative. They're really fun and colorful like the toys of yesteryear but they do have some odd design quirks and QC issues too. "Buzz Saw" Hordak is a Great figure and despite his quirks he really is a fun toy with lots of little extras and some great headsculpts. If you have the standard Hordak pop the head from this one on him for the best Origins Hordak around!

If you're a fan of Hordak then check out my reviews of the vintage Buzz-Saw Hordak, the Masters of the Universe Classics Hordak, "Buzz Saw" Hordak, and the Spirit of Hordak, NECA's Hordak staction and Hordak Mini Bust, the MOTU Origins Hordak, the ReAction Hordak and Hordak (Grey),the Tweeterhead exclusive Masters of the Universe Legends Hordak maquette, the Super7 neo-vintage Hordak, the Sonic kids meal Hordak, and the M.U.S.C.L.E. slime Hordak.