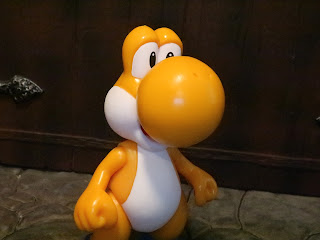 I really don't think Jakks Pacific' Super Mario Line (a Mario focused continuation of their long running World of Nintendo line) has innovated at all over the past few years. That being said, they're still making the figures, they usually have fun, colorful sculpts, and their distribution seems to have gotten better. I ordered this Orange Yoshi from Big Bad Toy Store but I've been seeing lots of these figures at Walmart, Target, and GameStop (who has their own exclusive packaging). The classic green Yoshi was part of the first series of figures back in 2014 and has been repainted a few times over the years (we've gotten blue, red, pink, and black variants of Yoshi so far). This guy is a simple repaint, too, but I couldn't resist him. Originally in some earlier stuff there were brown Yoshis but the orange Yoshi has replaced that color (maybe the brown was originally intended to be orange?). My daughter and I both love Nintendo and we have fun collecting this line together. Let's take a look at Orange Yoshi after the break... 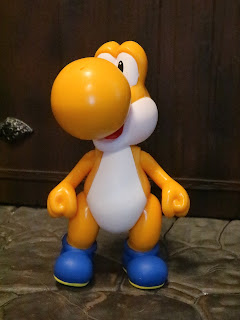 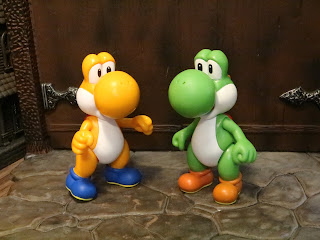 * Orange Yoshi is on the left while Green Yoshi is on the right but, assuming you know your colors, you didn't really need me to tell you that, did you? I don't think Jakks Pacific has done anything to change this mold up since it was first used seven years ago, so this is a simple repaint. I do appreciate the consistency, though, as all of the Yoshis look excellent on display together. 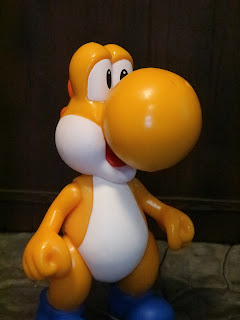 * I've reviewed so many of these Yoshis so I don't really have a lot more to say about the sculpt: Jakks did a really nice job capturing the Nintendo design and style of the character. He's cute with a simple design and bright, cheerful paint applications. What else could you want from a new version of Yoshi? 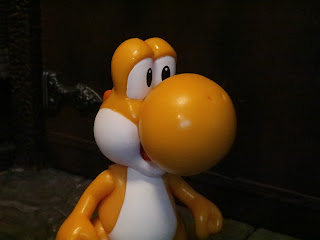 * The headsculpt is pretty good and definitely captures the Nintendo style, especially the eyes. 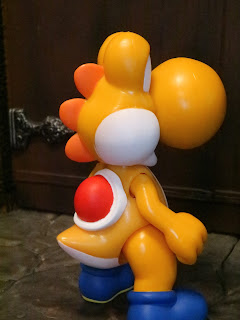 * Turn Yoshi around and you can see the shell on his pack and the spikes running down the back of his neck. The subtle color differences on the different Yoshi flavors really makes them each standout. 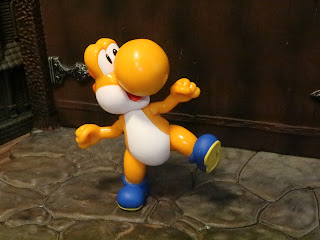 * The articulation here hasn't changed at all but I'm OK with the simple range of motion in Yoshi's shoulders and hips (he can hold a kicking pose with no hand support needed). He's durable and fun to mess around. 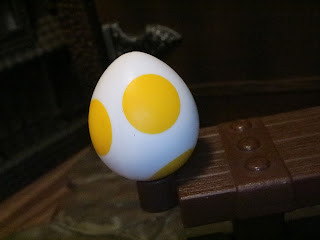 * Yoshi comes with an egg, the same accessory as the previous three Yoshi figures. The only difference here is that this egg has yellow spots instead of green, pink, blue, black, or red ones. The egg isn't a terrible accessory but it does have a hard time standing up on it's own. 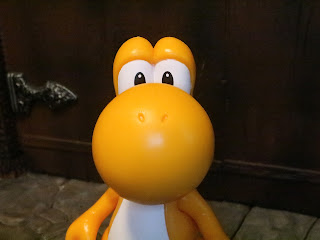 The Negatives:
* After all these years I still think Yoshi's nose is oversized. Since this is the same sculpt as all of the previous Yoshi's this isn't anything new; it's just something that I'm reminded of whenever I try to photograph Yoshi and find his eyes obscured by his enormous bulbous nose. 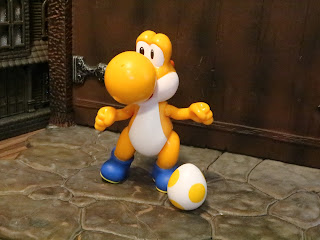 The price on these guys hasn't gone up too much over the years (maybe $2 or $3 bucks) and they're still as good as they've always been. I really wish Jakks Pacific would branch out a bit more and give us characters like Daisy, Rosalina, Birdo, Mouser, and more of the Mario Bros. cast but the figures they are putting out are fun and colorful and Orange Yoshi is another fun addition. He looks great on the shelf, especially with his siblings, and is just a fun part of a Nintendo display. This line hasn't been great in a few years but it's still a fun, consistent way to get quality Nintendo collectibles at a very reasonable price.
I have reviewed a few other Yoshis: The classic green Yoshi, Red Yoshi, Blue Yoshi, and Pink Yoshi.
For Super Mario reviews check out the following:
Dungeon Diorama Set
Fire Bro.
Fire LuigiIce Mario
Ludwig
Mario with Super Star
Parabones
Piranha Plant