Action Figure Review: Skelegod from Masterverse/ Masters of the Universe: Revelation by Mattel 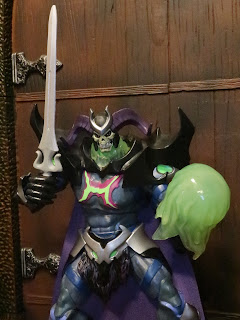 The adventure begins again! Yes, I am indeed reviewing the first figure in a brand new series of Masters of the Universe action figures and this time it's from the Masterverse line which is actually sold at retail. In the past week or two I've actually managed to obtain all six figures released in the series so far from retail (the basic figures from Walmart and the two deluxe figures from Target.com) and I'm quite excited about the potential this series has. It seems that the the Masterverse line might encompass MOTU figures from various media sources but so far everything we've seen is focused on the upcoming Masters of the Universe: Revelation that will premiere on Netflix on July 23rd. I am super excited for the series and have high hopes for it. Mattel seems to be quite invested in it, too, as Walmart stores are receiving large bunkers that are filled with figures and adorned with awesome art. The first figure I'll be reviewing is Skelegod, an oversized figure who appears to be Skeletor after he acquires the Power of Grayskull. Skeletor has been after the Power of Grayskull since the earliest minicomics and he was even depicted possessing it in the 1987 movie. We've seen "powered up" variants of Skeletor in the modern DC Comics series as well (the Skeletor Unleased version from the DC Universe vs Masters of the Universe story comes to mind) so there's a bit of a history with this concept. Here Skeletor is referred to as Skelegod, though, which shows that he's definitely packing some power. Let's take a look at this figure after the break and begin checking out yet another MOTU toy series... 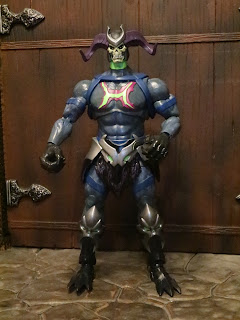 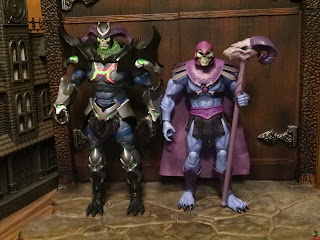 * Skelegod is on the left while the standard Skeletor from Masterverse is on the right. These are completely different figures and while they're constructed the same Skelegod is around and inch taller than Skeletor. He's a bit bulkier, too. 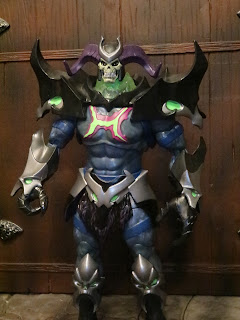 The Positives:
* Here's Skelegod! The design of the Masterverse figures (or at least the MOTU: Revelation figures) seems to be taller and a bit thinner than Masters of the Universe Classics with a bit more of an animated style. They really remind me of what the 200x line would look like without the preposed sculpts: Smaller head, sleek but muscular bodies, and more detailed designs. Skelegod's body is much darker than Skeletor's and it features a dark paint wash to give him a ore brooding, grimy appearance. He's sporting lots of armored bits, most of which seem to have glowing green eyes. The shoulder pads are definitely over the top in a way that seems to marry the look of barbarian fantasy art with anime style. The shoulder pads are a separate piece, too, and can be removed. The design on Skelegod's chest is pretty cool. It kind of looks like the He-Man "H" symbol but in more Skeletorish colors. There is a harness that might be removable but it's really tough to get off. 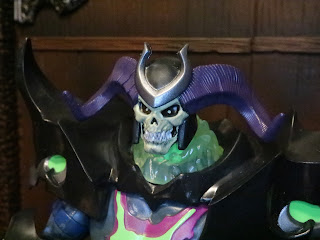 * The portrait is really cool. It's clearly Skeletor with a fantastic looking face but he's wearing a helmet with large ram horns on it, kind of like the head of the Havoc Staff. Skeletor's neck looks to be covered in green flame of some sort. The flames are a removable piece that attach over the base of his neck so if you wanted to remove them for some reason you could. 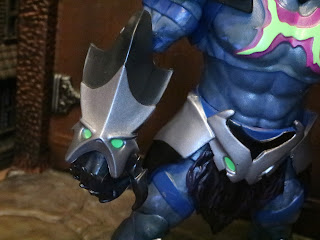 * These gauntlets are really cool, aren't they? They're removable (just pop off the hands and they slide off) and they look over the top wicked. The green eye-like designs are very fitting for a powered up Skeletor. 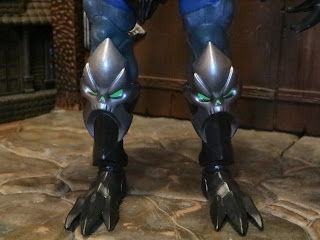 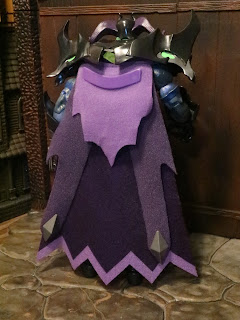 * Skelegod has a really cool cape. It's made from multiple layers of soft goods with some plastic attachments to keep it weighted down so it hangs naturally. The cape fits over the harness on Skelegod and stays on quite well. You can easily remove it, though, so getting the look you want for the figure is pretty simple. 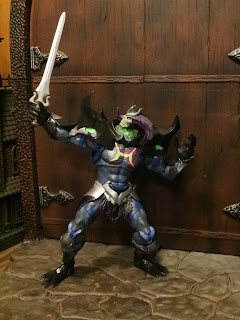 * Let's talk about the articulation here. While it's not as smooth as what you'd find on a Marvel Legends or G.I. Joe Classified Series figure it's still pretty good. maybe a bit on the rubbery side but solid nonetheless. There is a wide range of joints, probably about everything you'd expect on a modern collector focused action figure except for the butterfly hinged shoulders, and most of them have a good range of motion. I'd rather have the single hinged elbows with a great range of motion rather than double hinges but it works well. 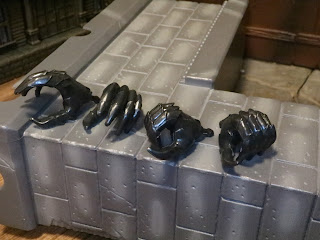 * Skelegod comes with two pairs of hands: One pair for gripping his sword and another pair with gesturing claws designed for looking menacing and engaging in battle. They swap pretty easily and seem fairly sturdy. Not the sturdiest but I'm not worried about breakage or anything. 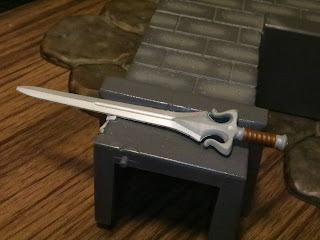 * What turns Skeletor into Skelegod, the Cosmic Lord of Destruction? Probably the Power Sword. Skelegod comes with the same Power Sword as He-Man (well, the handle is a slightly different shade of brown) so it seems likely that part of the plot of MOTU Revelation will be the heroes having to reclaim the power of Grayskull from Skeletor. It's a cool sculpt with a long blade. A very long blade, but I like it. It's very classic yet still a bit fresh, too. 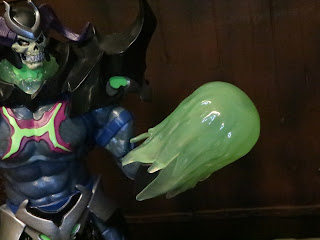 * Skelegod also comes with an energy burst effect which can fit over any of his hands. It's a translucent green piece and while the detail is kind of soft it is pretty neat looking. Stuff like this is always fun to play with. 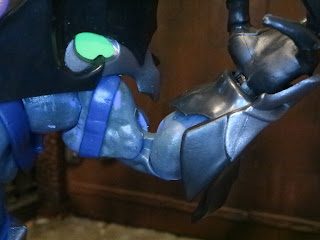 The Negatives:
* I'm not a huge fan of the double jointed elbows. They look kind of odd, make the arms look overly long, and they tend to be looser than a normal joint. Sometimes when I have the heavier energy effect on Skelegod's wrist the elbow hinge won't hold the wait and will drop out of position. 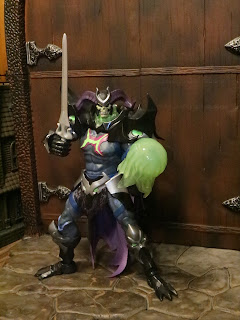 While Masterverse doesn't seem to be breaking new ground so far as action figures go it does seem to be a line with some potential. Mattel's still behind many other companies when it comes to 6-7 inch scaled figures targeted at collectors but with Masterverse some of the more recent additions to other toylines have finally made their way into MOTU. Things like swappable hands, balljointed torsos, and double joints do make these feel more modern than any MOTU line before. While I don't like the style as well as MOTUC I do like these. There's something still classic about them while having some modern anime sensibilities about them. Not everyone will care for the style or the show but Mattel produced a pretty good deluxe figure with Skelegod. It's cool to see something new and different in MOTU and hopefully we'll continue to be surprised with what Mattel releases. Skelegod is a Great figure and a really fun first release from the Masters of the Universe: Revelation themed Masterverse line.
I've reviewed so many figures of Skeletor/ Keldor that he has his own review archive. Check out Snake Mountain for a whole mess of Skeletor reviews!
Posted by Barbecue17 at 7/13/2021