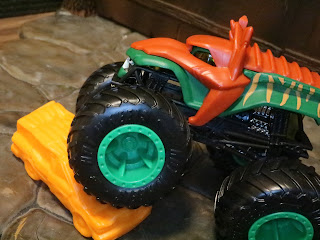 The last time I purchased a toy of a Monster Truck was probably in the 1990s when there was some line of Monster Trucks that had MASK sized action figured with them. I had...Grave Digger, maybe? Anyways, I've never been much of a Monster Truck fan but I recently bought one because...well, because it looks like Battle Cat. And my oh my, how awesome is this? Hot Wheels has dome some pretty cool Monster Trucks mashed up with other properties (Nintendo, TMNT, etc.) but it was Battle Cat that caught my attention. It just works. Don't ask ask me to explain my love for this toy. It's crazy, over the top, and irresistible! Let's check out Battle Cat this Wednesday! Wednesday, Wednesday! at Action Figure Barbecue.com. After the break... 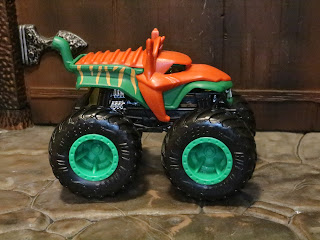 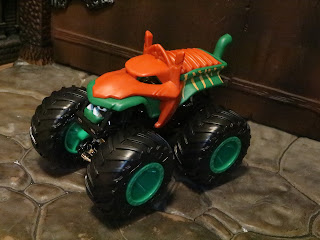 * Battle Cat's inner workings look like a standard Monster Truck but the body is clearly painted in Battle Cat's traditional colors. As a toy truck itself this is pretty cool. You can see the engine, the body is a mixture of diecast metal and plastic, and the vehicle has a simple system that emulates shocks. 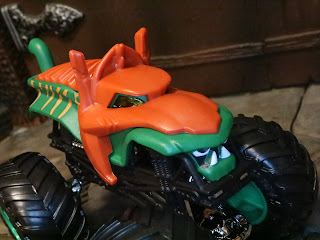 * The cab is awesome and looks like Battle Cat's distinctive helmet. I love the design here! It's so very, very cool. There are also some yellow lenses in there that serve as the windshields and some painted on teeth for the grill. 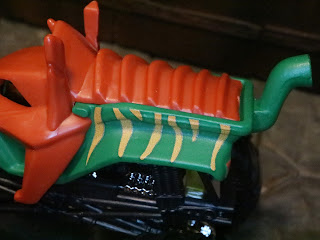 * The back of the truck has some a really cool texture and, of course, yellow stripes. 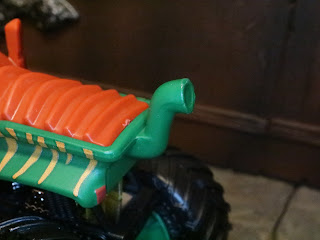 * Check out the tail pipe! It's totally sticking up like Battle Cat's tail! 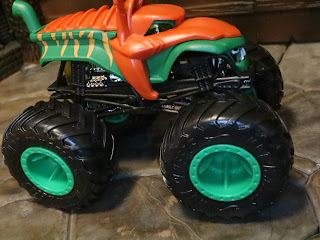 * The wheels are huge and they're actually rubbery, too. They look really cool and are perfectly functional. 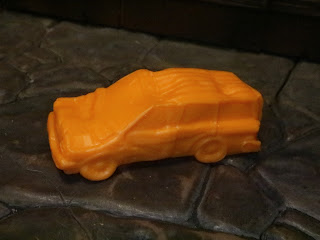 * Battle Cat also comes with a rubbery orange car. Why's that? To smash of course! You can run this thing over and make it look like it's being crushed by his massive tires. It's silly and gimmicky but it's kind of fun. 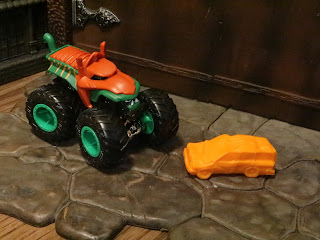 Holy smokes! I wasn't expecting much from this but for a about $5 or $6 dollars this thing is incredible. It's a fun toy on its own but the fact that it looks like Battle Cat is just too amazing. Usually stuff like this is kind of groan worthy but since Masters of the Universe is pretty crazy and over the top with toys being the core of the brand (unlike most other properties where comics, movies, or a TV show came first) it just works. I'm giving this an Epic. This thing is well worth hunting down and picking up. It's not as cool as Battle Cat himself but it's a cool tribute to the greatest green tiger in existence.