Minifigure Review: He-Man from Masters of the Universe: Micro Collection by Mattel 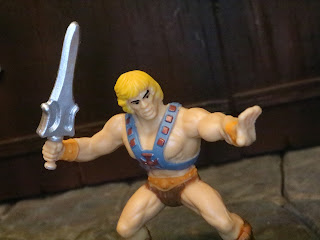 You've surely noticed that while I usually collect 6-7 inch action figures of properties I like, when it comes to Masters of the Universe I pretty much pick up whatever I can get. I just love seeing the different types of product out there. Recently Dollar Tree has become an unusually hot place for toy collectors with the pretty cool Final Faction line along with the budget G.I. Joe figures and now some very impressive Masters of the Universe minifigures. These seem to be very heavily based on the vintage toyline and they're called the Masters of the Universe: Micro Collection. These are actually made by Mattel and they're some of the best minifigures on the market. For $1 there is no reason not to track these down. I acquired my full set a week ago and it's pretty exciting to pick up a full set of MOTU figures for $5. The set includes He-Man, Man-At-Arms, Orko, Mer-Man, and Skeletor. Let's check out He-Man, the main man and most powerful man in the universe, after the break... 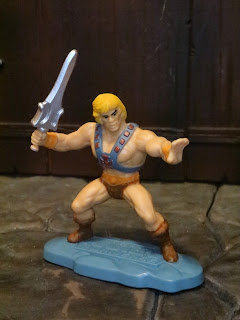 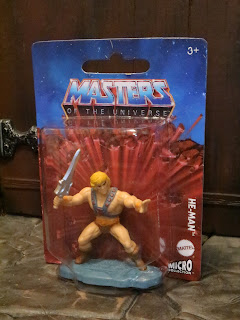 * These little guys come simply packaged on a very vintage looking red and blue bubble card. They really jump off of the shelf, don't they? 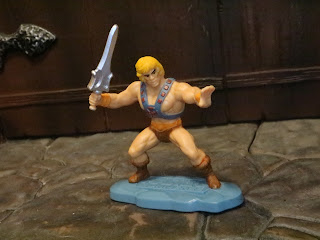 * He-Man is a simple painted plastic minifigure attached to a display stand with the Masters of the Universe logo on it. He's very durable and made from a sturdy plastic that isn't rubbery at all. He stands perfectly and I like the pose with his sword held at the ready and his left hand held out to fend off a foe. 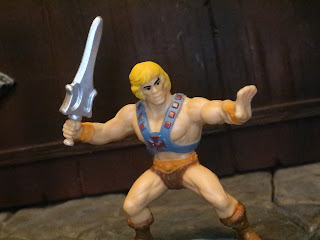 * Just take a look at this guy for a second. For $1 this is an incredibly well painted and amazing looking He-Man with a great vintage aesthetic. The hair and face is pure vintage. The sword and smaller paint applications even look pretty nice in this scale. Mattel did a fantastic job on this, especially given the budget price. 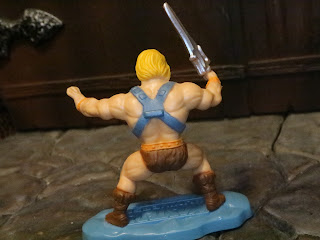 * While he doesn't have the red squares on his harness on the back he still has the rest of his paint applications and the slot to place his sword like the Origins He-Man has. 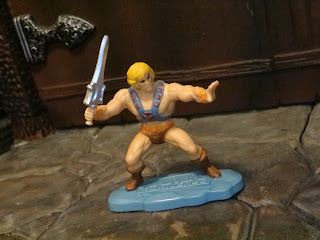 For $1 this is a Great 1/2 minifigure. Honestly, it's a pretty solid minifigure on its own but that price point just makes this absolutely worth tracking down. Dollar General has been getting some better stuff in lately and while we're not talking anything the quality of NECA Ultimates, Marvel Legends or McFarlane's DC Multiverse line, they definitely seem to have improved their offerings. I think if we're ever going to see a major physical retailer of action figures pop up again (right now we've got Walmart, Target, and GameStop basically) then it's going to come from one of the chains like Dollar Tree, Family Dollar, or Dollar General deciding to branch out into mainstream retail. They have tons of stores and some of them, like Dollar General, are already working to expand into a bit of a more upscale demographic with their Popshelf stores. Could we see the next major place for toy hunting be born out of a place we typically avoided? Only time will tell!

I've reviewed so many toys of He-Man/ Prince Adam that he has his own review archive. Check out Fabulous Secret Powers for all of my He-Man reviews!