Action Figure Review: Ricky "The Dragon" Steamboat from Masters of the WWE Universe by Mattel 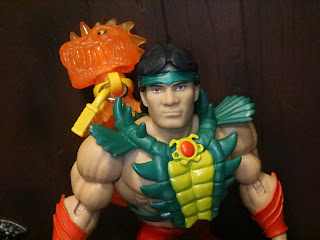 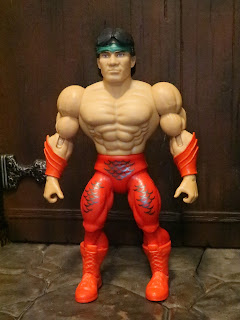 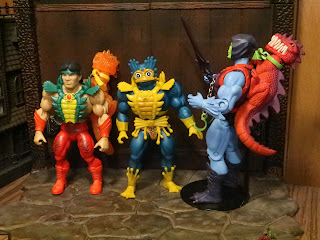 * Ricky "The Dragon" Steamboat borrows from a few different MOTU figures. He has the same armor as the Lords of Power Mer-Man and his dragon is reused from the Masters of the Universe Classics Dragon Blaster Skeletor. Of course, Ricky has the same body as almost every other figure in the line, too. 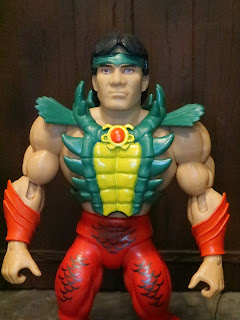 The Positives:
* You know what? I think Ricky "The Dragon" Steamboat looks like a genuine, honest to gosh Masters of the Universe character. Seriously, doesn't he look just like a character that could have appeared in the vintage line or who might have shown up in either a minicomic or on the Filmation cartoon? He's got great colors, cool scales on his red pants, and some nicely painted armor that he's borrowing from the Lords of Power Mer-Man. He'd make a great addition to the Heroic Warriors for sure! 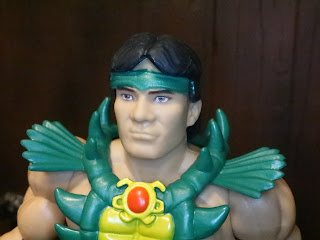 * This is a pretty decent rendering of Ricky Steamboat with nice paintwork on his eyes. I love that his headband matches his armor, too. It's good color coordination. 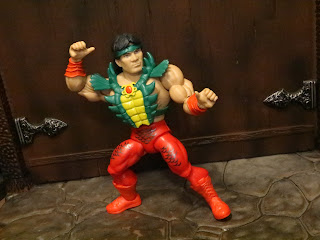 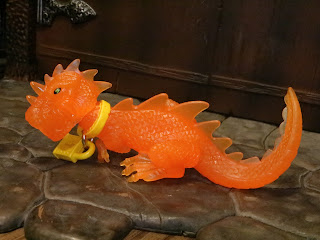 * And here's his dragon! So, yes, the dragon is a reused accessory from the MOTUC Dragon Blaster Skeletor figure except this time he's simply molded in translucent orange plastic. There's very little paint here (just on the eyes and collar) but the translucent orange is pretty awesome looking and kind of reminds me of the ghosts from Kenner's The Real Ghostbusters line. 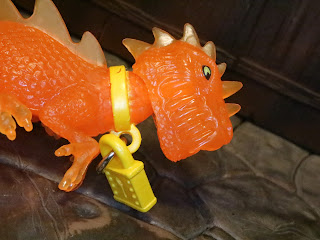 * The head is pretty cool and is on a balljoint. You can actually take off the dragon's had and put it on Ricky's neck if you want. Then he's really The Dragon! The padlock on the dragon's collar isn't removable but it is a separate piece held on with a metal ring. * Behind each standard MOTWWEU release is a minicomic of sorts. It's only 4 pages (cover, bio, comic, and back page with cross sell art) but it looks cool and does offer some cool information on the role of the characters in WWEternia. This one features Ricky Steamboat challenging the hWo Macho Man! 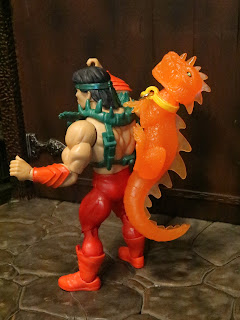 The Negatives:
* So, uh, how exactly is the dragon supposed to attach onto Ricky Steamboat's back? It just kind of hangs there, and quite precariously at that. The MOTUC Dragon Blaster Skeletor had a large plug on it's back that the dragon could securely attach to but Ricky's armor doesn't have any such peg. This is such a cool idea but the execution is really disappointing. Mattel surely should have realized that the feature on this toy just isn't functional. 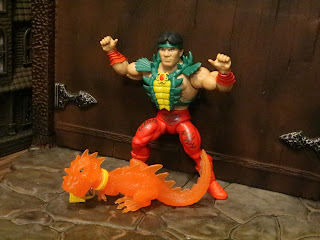 Rick "The Dragon" Steamboat on his own is probably one of the best MOTWWEU figures released. The dragon is a super cool accessory and is fairly successful on its own but the fact that there is no really secure way to attach it onto Ricky Steamboat's back is pretty lame. Still, I really do like this one. The dragon companion is just really fun and looks cool. I really do think Ricky "The Dragon" Steamboat looks like a legit MOTU figure from the vintage era. He's still a Great figure though you'll have to work to balance that dragon!
This is the first figure of Ricky "The Dragon" Steamboat I've reviewed. For more Masters of the WWE Universe reviews check out the following:
Becky Lynch
Braun Strowman
Faker John Cena
"The Fiend" Bray Wyatt
Finn Balor
Goldberg
Grayskull Mania
Jake "The Snake" Roberts
Kane
"Macho Man" Randy Savage
"Macho Man" Randy Savage (Series 5)
Mr. T
The New Day
Rattlesnake Mountain Ring
Rey Mysterio
The Rock
Roman Reigns
Seth Rollins
Stephanie McMahon
Sting
Triple H
Ultimate Warrior
Ultimate Warrior (Series 6)
Undertaker
Posted by Barbecue17 at 7/14/2021