Action Figure Review: He-Man from Masterverse/ Masters of the Universe: Revelation by Mattel 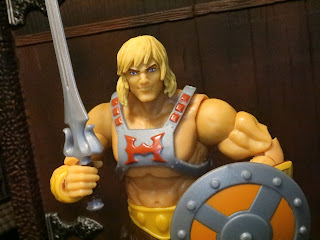 Ready for an all new He-Man review? Of course you are! I watched all five episodes of the first half of Masters of the Universe: Revelation with my family on Friday and while I am really enjoying the series so far I understand some of the reasons why it has been so divisive. It's a bold, interesting take on MOTU that draws from multiple sources and tries some new stuff. At this point I'm going to avoid spoilers as much as possible since the show hasn't even been out for a week yet. So, where to start? Well, this is He-Man from the new show. While the style is a bit different overall he looks like the He-man you remember, particularly if you're most familiar with the cartoons. There are some minor differences but overall he feels like a combination of the Filmation character design with some elements of the 200x style. I like the look of these Masterverse figures overall and am really enjoying the line. While I was watching MOTU: Revelation I kept seeing characters in the show and adding them to my mental wish list of figures I hope to see in Masterverse. Of course, who would collect this line without picking up He-Man? Let's take a look at He-Man after the break... 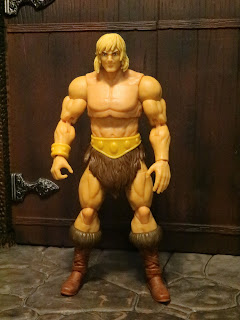 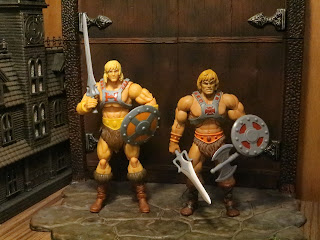 * The Masterverse He-Man is on the left while the Masters of the Universe Classics He-Man is on the right. Comparing both He-Man figures is a fantastic way to really see the difference in size, style, and articulation in the lines. 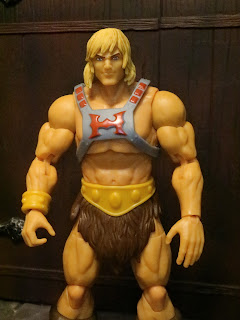 * He-Man has a slightly stylized appearance that is very muscular but very slender, too, with a smaller head. It matches the animation fairly well. The sculpt is pretty good with lots of detail on He-Man's muscular body and even on his furry trunks. Take off the removable harness and you'd have a pretty decent Marvel Legends Ka-Zar figure. Speaking of the harness, one of the biggest differences between this He-Man and previous He-Man figures is the emblem on the harness which is the stylized H/M from the vintage Battle Armor He-Man. That's a pretty cool design and I really love how it looks. 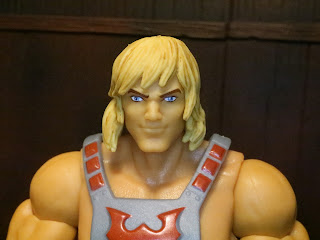 * He-Man's headsculpt is a bit friendlier than some versions of the most powerful man in the universe, adhering to what you often see on the Filmation inspired toys. I really like it and, again, it matches the look of the animated character nicely. He's got a very strong chin, some fairly detailed hair, and very piercing eyes. 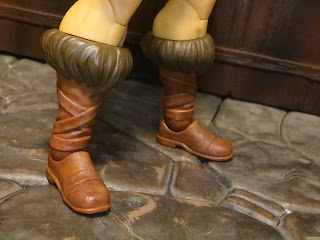 * He-Man's classic boots are nicely sculpted here with lots of detailed fur and leather wrappings and even some dry brushing effects to bring out some detail. 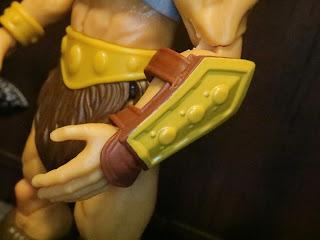 * The bracer on He-Man's left wrist not only looks cool but is also a separate, removable piece. You can pop off He-Man's left hand it slides right off. 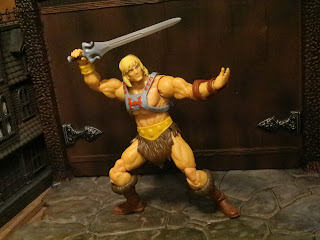 * The articulation is overall really good here. In fact, I do believe this is the most well articulated He-Man figure ever made. He has an abundance of joints and can achieve some excellent poses. My only complaint is that he doesn't have a vertical hinge on his right wrist for holding his Power Sword aloft (although you can kind of fudge it). 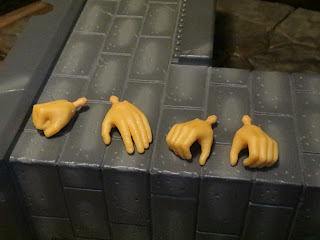 * He-Man has two pairs of interchangeable hands. There is a pair of standard grips, a right handed fist, and an open left hand which helps with using his shield. They swap off easily and the pegs all feel nice and sturdy. 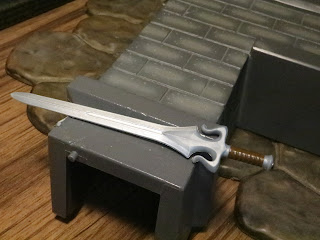 * Of course He-Man has to come with the Power Sword, right? It's a really cool design and I really like it. It's very classic looking with some nice paint details. It's the same sculpt that comes with Skelegod but with a slightly different shade of brown for the handle. 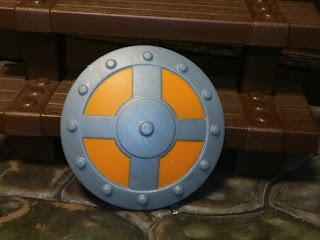 * He-Man also comes with his shield. No axe this time, though. The shield is awesome as it's very traditional looking with super functional straps that hold the shield over He-Man's left bracer. I really like how it works and it looks great on the figure. 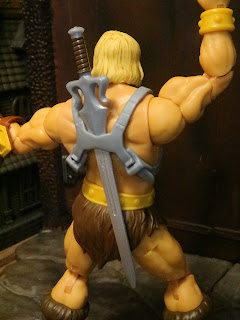 * There is a groove in the back of He-Man's armor designed to hold the Power Sword in place. I'm sure it wasn't really necessary but it's there and it works well to give He-Man a place to stow away the sword when he's busy doing other stuff like punching holes in things or catching the moon or something. 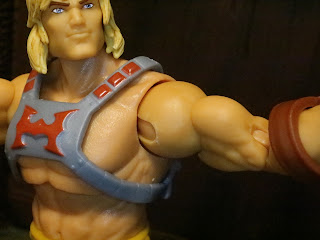 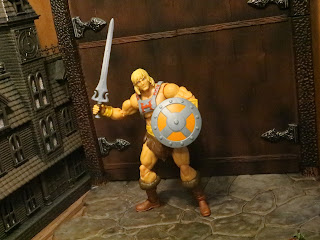 While it would have been really cool for He-Man to have an axe or perhaps an alternate portrait I'm still pretty happy with how this guy turned out. I own many, many He-Man toys and this one definitely still manages to feel very new and fresh while also being very traditional. The articulation is mostly excellent (except for the glitch in the left shoulder) and his shield and bracer are excellent. While you might have mixed feelings on the new show I think it's hard to argue with Mattel's production of this figure: He's fantastic! The small head is an unusual style but the 200x figures kind of had that too and I really don't mind it. It's fun to have another "original" He-Man from a different Mattel line. It's a new era, folks!
I have reviewed so many action figures of He-Man/ Prince Adam that he has his own review archive. Check out Fabulous Secret Powers for more He-Man reviews than anywhere else on the internet!
For more reviews from Masterverse check out the following:
Masters of the Universe: Revelation
Battle Cat
Evil-Lyn
Skelegod
Posted by Barbecue17 at 7/26/2021